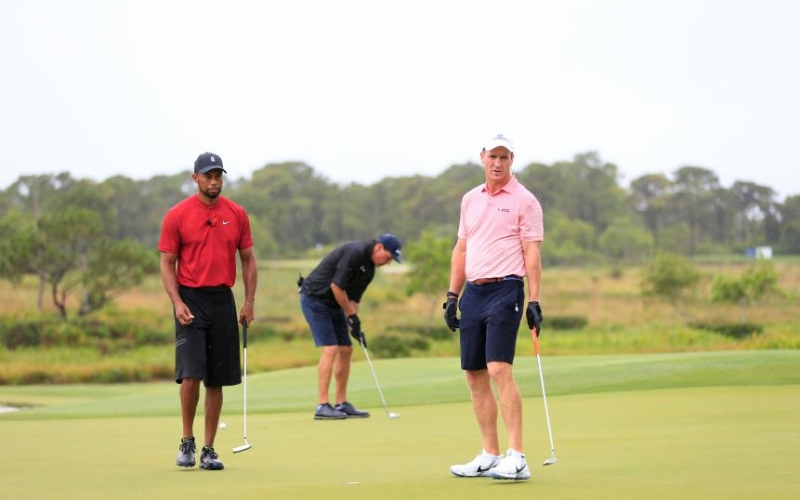 Cliff Hawkins
Former NFL player Peyton Manning, Tiger Woods and Phil Mickelson warm-up on the putting green during The Match: Champions For Charity at Medalist Golf Club on May 24, 2020.

By Tod Leonard
Four big sports stars and America’s hunger for live sporting events added up to big numbers for Sunday’s The Match: Champions for Charity.

According to a press release distributed on Monday by Turner Sports, the second edition of The Match, with Tiger Woods and Peyton Manning beating Phil Mickelson and Tom Brady 1-up, averaged 5.8 million viewers, though it should be noted it appeared on four platforms—TBS, TNT, TruTV and HLN.

Turner said the number is the largest for a golf audience ever on cable, beating out the previous record of 4.9 million for ESPN’s broadcast of the first round of the 2010 Masters, which was Woods’ return from the scandal he experienced in late 2009.

RELATED: Our six favourite things about The Match II

The Match telecast, which raised $20 million for COVID-19 relief organizations, peaked at 6.3 million from 5:45 p.m. to 6 p.m., Eastern time, as the duos played the front nine in stormy weather at the Medalist Golf Club in Hobe Sound, Fla. Woods and Manning got out to an early 3-up lead, but Mickelson and Brady scratched back during the modified alternate-shot back nine to get to within one before falling in near-darkness at 18.

The overnight ratings for the show made it the top TV program of the day, with the golf beating out NASCAR’s Coca-Cola 600 on Fox. In ratings, The Match handily bested last week’s TaylorMade Driving Relief, which drew 2.35 million viewers in featuring Rory McIlory and Dustin Johnson defeating Rickie Fowler and Matthew Wolff.