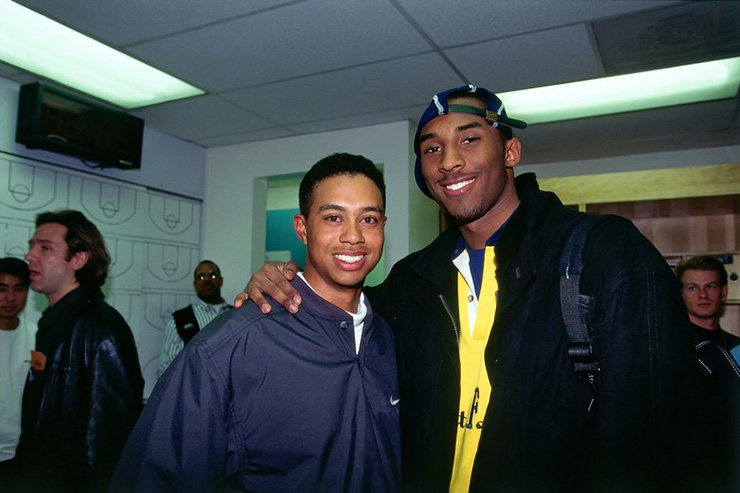 Tiger Woods and Kobe Bryant pose for a photo circa 1997 at the Great Western Forum in Inglewood, Calif. (Andrew D. Bernstein/NBAE via Getty Images)

By Daniel Rapaport
Sunday’s final round of the Farmers Insurance Open was overshadowed by news of the death of basketball star Kobe Bryant and his 13-year-old daughter, Gianna. Per multiple news reports, both were killed, along with as many as seven other passengers, in a helicopter crash in California.

The news broke around 11:30 a.m. local time, while the entire field was on the golf course at Torrey Pines. A tangible sense of grief pervaded the grounds as fans looked at their phones and learned the tragic reality.

Many players, however, didn’t find out until after their rounds, as they weren’t checking their phones during play. A number spoke about the news afterward, including Tiger Woods, who knew Bryant for some 20 years and grew up a huge Laker fan in Southern California. Woods only learned of Bryant’s death after finishing off a closing 70.

“We really connected on the mental side of it,” Woods added. “The prep. How much it takes to be prepared … that’s where he and I really connected. We were very similar.”

Woods was asked about what he’d remember most about Bryant. “Ultimate toughness. Ultimate competitor. One of the most shocking, tragic days I’ve ever been a part of.”

“I just don’t know what to say, It’s so shocking, so harsh, sad and real right now.”

Here’s the reactions from other tour pros:

Marc Leishman: “It’s devastating news for his family and the whole basketball community. It’s horrible to see someone who’s so successful die in a tragedy like that. Yeah, I just give my condolences to his family and everyone who knew him. It’s a very sad day.”

Rory McIlroy: “I’ve never liked helicopters … that’s terrible. So sad. Ironic, given what LeBron did last night to pass him, as well. Horrific.

“His dedication, his drive. The fact he’d make his teammates wait on the bus for two hours while he set an example and worked hard and mastered his craft. And that’s what he did. He was a pure master of what he did.”

Tony Finau: “I’ve experienced something like this in my life before. My mom passed away in a tragic car accident in 2011. It’s crazy that some of those feelings that I had at that time are back. That’s how much Kobe meant to me. At a different magnitude—the love of a mother is one you can’t replace, but to have some of those feelings come back when I heard the news, it makes me quite sad.

“I think the way to live a life that respects Kobe, and that he would respect, is have the Mamba mentality. And maybe that’s what I need—work even harder at your craft, and have more love of your craft. Maybe that’s something we all need as athletes.”

Max Homa: “It’s devastating. He’s a hero to so many people. The way he competed. I talk to Justin Thomas about this all the time, how much we try to emulate that. He’s a lot like Tiger for us.

“His mentality meant a lot to me. … He was Superman. He played basketball with about eight broken fingers. He shot free throws with a torn Achilles. It’s hard to imagine he could have the sniffles, let alone have something like this happen.”

Jason Day: “It actually makes you feel physically sick. He obviously had an unbelievable career, and he was doing some great stuff off the basketball court. For this to happen to someone that a lot of people idolize, it makes you feel sick. There are really no words to describe what is happened. I cannot imagine what his wife his going through, what his family is going through.

“You never know when time is up. He was a very healthy man, in the prime of his life, accomplishing so many things off the court.”

Matthew Wolff: “He was a light. Everyone around him felt really good. It’s really sad, it just shows that nothing is bigger than life. Anything can happen to anyone.”

Players also took to social media to pay their respects to Bryant.

RIP, Mamba. You will forever be an idol to me ??

Kobe Bryant was my HERO growing up. Even to this day he was an inspiration to the way I approached things. I woke up every day and saw this quote every time I opened my phone. His mentality motivated me not only in hard times but throughout my whole life. RIP, Kobe. pic.twitter.com/VtoYenQaYt

Mourning with the rest of the world the tragic loss of the legend Kobe,his daughter Gianna, and all of the other passengers. This is just devastating and there are no words to describe the sadness and loss we are all feeling. We are so so sorry.

I heard the news on the 11th tee today. We’ve lost a great man, an incredible athlete, a legend. His daughter and the others that were lost… it’s unimaginable. My prayers go out to all their families. Thankful for all we have to remember you by… RIP Kobe

When I made my first paycheck, I used that $ to buy a ticket to see Kobe play in 2007 when he went from 8 to 24. This photo was taken with my blackberry. I wanted to see greatness in person and I was speechless. You’ve inspired so many. Rest In Peace Mamba & Gigi pic.twitter.com/hv2C5aIRmq

Wow I am just at a loss for words… life is just way to short and everyday you need to count your blessings. Kobe and Gigi and the other passengers that were on the helicopter I am sending prayers and my deepest… https://t.co/qa0fNrhozj