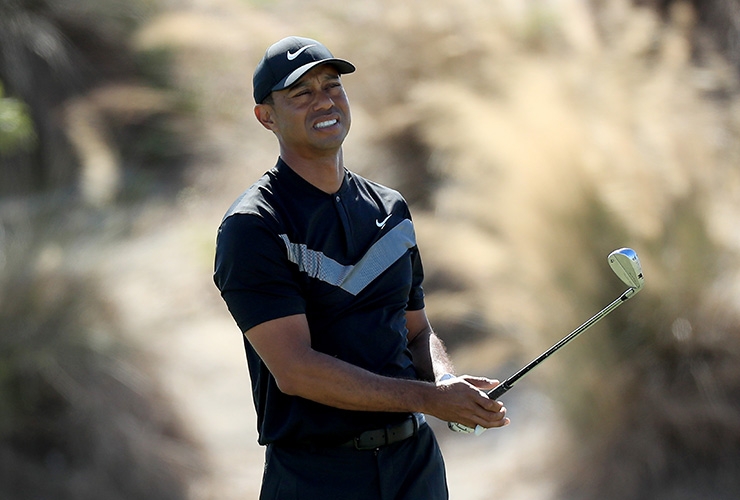 David Cannon/Getty Images
NASSAU, BAHAMAS – DECEMBER 04: Tiger Woods plays his third shot on the 3rd hole during the first round of the 2019 Hero World Challenge at Albany on December 04, 2019, in Nassau, Bahamas.

By Daniel Rapaport
NEW PROVIDENCE, Bahamas — Some even-par rounds are a bit of a slog—a birdie here, a bogey there, but never deviating too far from the baseline. Others, like Tiger Woods’ opening 72 at the Hero World Challenge, are a bit of a roller coaster.

The tournament host made an eagle, four birdies, four bogeys and a double-bogey on a warm but windy day at Albany Golf Club. He was two-over at the turn, three under after 15 and right back where he started after a disappointing 6 at the last. Woods will enter the second round of this 18-man tournament tied for 11th and six behind co-leaders Patrick Reed and Gary Woodland.

“It was not a very good start,” Woods said of his first competitive round since winning the Zozo Championship and tying Sam Snead’s all-time record of 82 PGA Tour victories. “Didn’t play the par 5s well early and then got it going on the back nine for a little bit. Got myself right there, in the mix, and then bad shots on 17 and 18.”

The five-time Hero champion began the day with two pars before a bogey at the par-5 sixth, which was the result of a too-frisky pitch and missed five-footer for par. Woods got back to even after chipping to tap-in range on six, the second of Albany’s five par 5s—his short game was terrific all day—but made the turn in two-over 38 by way of bogeys at eight and nine.

The dropped shot at the ninth, also a par 5, came after his tee shot finished in a sandy area just right of a bush. Woods opted to try a difficult second shot that came out with cut spin, which was exacerbated by wind in his face, and found water down the right side.

Things turned around quickly on the back nine. Woods played the five-hole stretch from 11 to 15 in five under, highlighted by a picture-perfect chip-in for eagle (and a mini fist-pump) on 15.

He then turned back into the breeze and came up short on the par-3 17th. A poor lie in the bunker forced him to play safely past the pin, and he two-putted from there for bogey.

The 18th was the most difficult hole on Wednesday—it played nearly a full stroke over par with a 4.94 scoring average—as an unusual wind made its 470 yards play closer to 540. Woods’ tee shot found the right bunker, and he opted to lay up with his second shot. His pitch landed short of the flag and spun backwards, leaving an uphill 20-footer for par. He needed three from there to come in with double.

“I didn’t putt that well today, but my short game was great, drove it really well. Just hit a couple poor iron shots that cost me a few shots.” 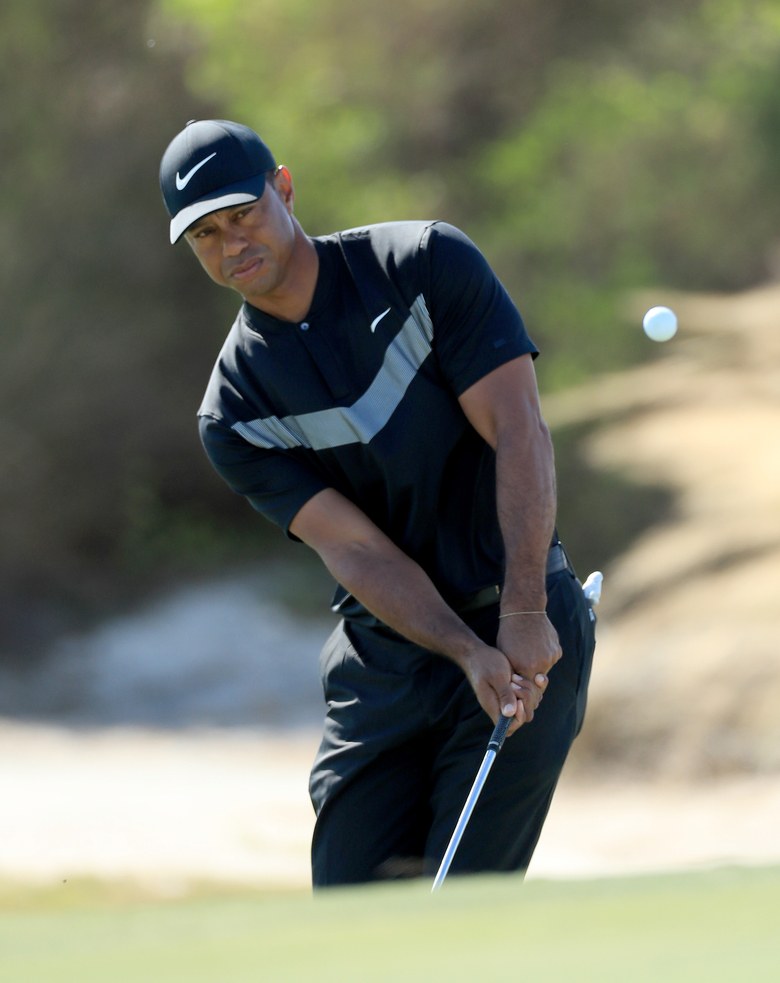 Woods won’t spend much energy ruminating on the disappointing finish. He simply doesn’t have time—there are stil preparations to be made for next week’s Presidents Cup, 10,000 miles away in Australia.

“We land there Monday, we don’t have a whole lot of time to get to the golf course. A few of us got to go do a [photo] shoot out on the river, dinner. Then the next day it’s a long practice round, six guys have to do interviews, a gala dinner that night, followed the next day by a practice round, photos, plus six more guys have to do interviews, pairings, and then we play.

“So there isn’t a whole lot of time, which is why we’ve got to run through things now so that when we get there, we have a clear picture of what we’re doing.”

Woods will start his second round at 11:23 a.m. EST alongside Bubba Watson.