Tiger: If I can get to even par “that’s not out of the realm of winning the golf tournament” 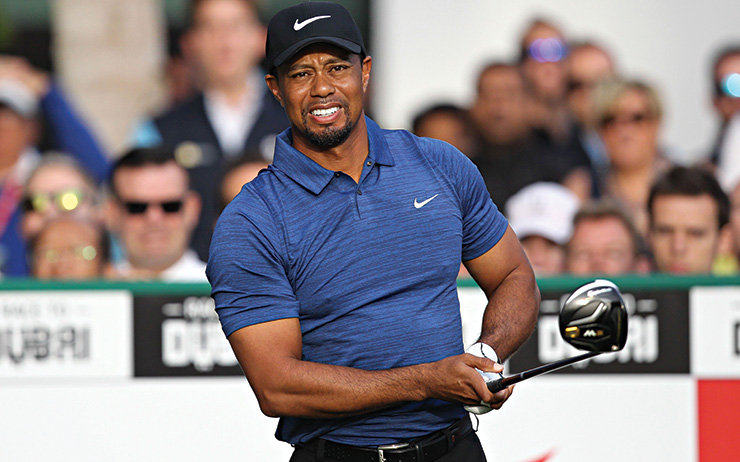 The good news? The only discomfort Tiger Woods felt yesterday was to his pride. Therein, however, lies the very sobering reality of the most-anticipated comeback in all of sports.

A birdie-less five-over 77 left the former world No.1 a whopping 12 shots off Sergio Garcia’s overnight lead at the Omega Dubai Desert Classic, on the cusp of a second successive missed cut and most definitely searching for answers.

Woods at least batted away fears for his reconstructed back despite looping the Majlis with a cautious gait and finishing his supposedly “pain-free” swing with a stiff, ungainly and simply un-Tiger like finish. It seems this is the new norm.

“I wasn’t in pain at all. I was just trying to hit shots and I wasn’t doing a very good job,” Woods said.

“At the end, I finally hit some good ones but the damage had already been done. On top of that, I could have hung in there, I could have shot something near even par if I would have made some putts, but I made nothing.”

At Torrey Pines last week Tigers’ driver deserted him as he carded rounds of 76-72 to miss the cut at the Farmers Insurance Open by four. The big TaylorMade stick co-operated Thursday with Woods hitting 10 of 14 fairways but he needed 33 putts and that was mainly the result of poor approach shots.

One statistician tallied the cumulative length of his putts at around 316 feet, an average of more than 17.5 per green.

“I didn’t hit the ball very well,” was the 41-year-old’s predictable verdict.

“I left about 16 putts short. I just couldn’t get the speed of the greens and consequently it added up to a pretty high number.

“I just could not hit the putts hard enough. I left every putt short. What I thought was down grain, downwind, would be quick, downhill, and I still came up short. Into the wind, uphill putts into the grain, I put a little more hinge on it going back to try to get a little more hit to it and it still didn’t work.

“So I’ll trying to figure something out, maybe more left hip on it, something, a little more weight, do something to try to get some of these putts to the hole.”

The trouble for Tiger beyond the greens and the approaches to them is the 48kmh winds forecast for Friday. Woods’ group was off early Thursday and missed the worst of the afternoon winds. He mightn’t be so lucky in the second round.

Woods looked miserable for much of his round and unsurprisingly so. He started with a bogey on 10, added another at 12 courtesy of a sloppy putt and then undercooked a wedge into the water fronting the 18th green. Only his putt-of-the-day 12-footer allowed him to escape with a bogey.

Through the green in two on the par 5 3rd, Woods was odds on for his first birdie but a mis-directed chip and a mis-read putt resulted in par. He then wasted a great drive on the 5th with a poor approach and a three-putt bogey before pushing his drive wildly on the 6th en-route to his fifth bogey.  It wasn’t much fun to watch, much less play.

Typically, Tiger remained defiant. Quite aside from making the cut, he insists he can still win. But seriously, how do you stay upbeat when the best game in modern golf is beating you up?

“Well, I’ve got to get to somehow — hopefully this wind blows tomorrow [Friday] and I shoot a good round and get back to even par now. That’s certainly not out of the realm of winning the golf tournament,” Woods said.

Just seven players and only two shots separated Woods from the foot of the leaderboard overnight. He’s going to need plenty of “looks’ and to make most of them for the global glare on his game to dull just a little. Here’s hoping.