Tiger can’t sustain fast Saturday start, leaving work to do if Sunday is to be a record-breaker at Torrey 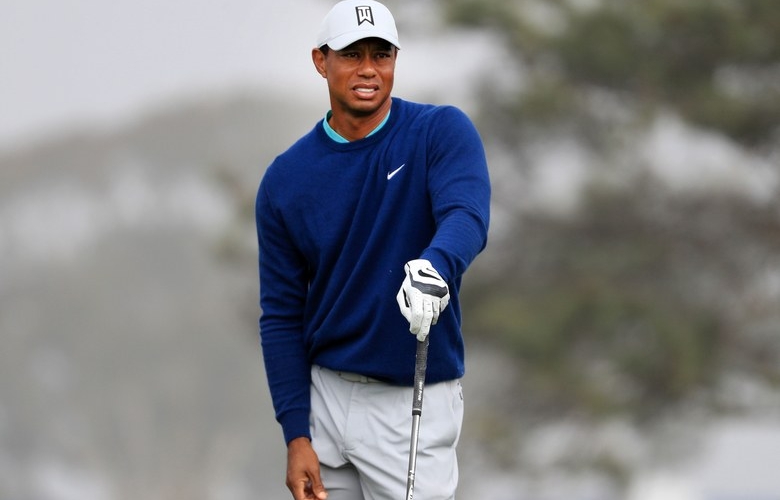 Sean M. Haffey/Getty ImagesTiger Woods reacts to his tee shot on the fifth tee during the third round of the Farmers Insurance Open at Torrey Pines South.
By Daniel Rapaport


LA JOLLA, Calif. — It’s tough to play a better nine holes than Tiger Woods’ front side at Torrey Pines South on Saturday, when he picked apart this U.S. Open muny and made it look like, well, just an ordinary muny. The trusty slap cut off the tee was there, and the always-crucial distance control with the irons was, too. He even returned to the scene of the crime—the green at the first hole, where he four-putted for double bogey on Friday—and poured a 14-footer dead centre for birdie.

Buoyed by a chip-in for par at 4, Woods kept his card bogey-free while writing down four birdies for a four-under 32 that was frightening in its simplicity. He was two within the lead, charging up the board at a place he’s won eight times as a pro. Put another way, this was the last thing his competitors wanted to see.

But Torrey Pines was always going to fight back. If the front nine was a cruise, the back nine was a slog. Woods couldn’t find a birdie, three-putted the par-3 11th and after finishing with a 37 had to settle for a disappointing three-under 69 overall, if such a thing is possible at this beast of a track.

Woods will have his work cut out for him if he is to win his eighth Farmers Insurance Open and claim his 83rd PGA Tour victory, which would break a tie with Sam Snead for the all-time record. At seven-under at 54 holes, in a tie for 14th, he trails Jon Rahm by five shots with 18 to play.

“The goal was to get to double digits by the end of the day,” Woods said after a crucial up-and-down for par on 18. “I figured that would be within the last couple groups going out tomorrow. Wasn’t quite able to get there, but hopefully tomorrow I can get off to another quick start and keep it going.”

The day began unreasonably early, as it always does when Woods has an early tee time. The initial tee times was 7:55 a.m. local time, but a stubborn layer of fog seemed to have no intention of lifting. It eventually did, but not before multiple delays that added up to two hours.

“We kind of knew [a delay was coming] going into it,” Woods said. “When we were warming up, I kept delaying the warm up, kept delaying the warmup, kind of stalling. Hitting a few shots to stay loose, but not wear myself out. Eventually we went into the car, turned the heater on and stayed warm.”

Woods eventually headed to the tee and was greeted by two unfamiliar faces, though one with a familiar name for golf fans: Chris Baker and Tyler McCumber, the latter being the son of Mark McCumber, a 10-time tour winner, including the 1988 Players Championship. “An amazing experience,” the younger McCumber said of his first time playing with Woods.

After Woods tugged his first tee shot into a fairway bunker, it looked like the opening hole might strike again, as it did in when he made double bogeys in three of the four regulation rounds during his 2008 U.S. Open victory here. But Woods summoned a fantastic fairway bunker shot to the fat part of the green to improve his score from Friday by three.

Donald Miralle/Getty Images. Woods reacts to a shot from a bunker on the first hole during Saturday’s third round at Torrey Pines.

He was off and running. The second birdie came at the par-3 third after a laser from around 200 yards to seven feet. After the chip-in at four, he added another birdie in textbook fashion at the par-5 sixth. Things seemed to be rolling after the fourth birdie at the ninth hole … until he made the turn.

Woods made par at 10 before, in his own words, “sticking it in the ground” at the par-3 11th, where he eventually three-putted. Golf is funny in that way—in a sport with 300-yard drives, it’s often the six-foot putts that tilt momentum most. He grinded through the rest of the round, frequently having to chop approaches from Torrey’s juicy rough.

But Woods looked in good position to steal a final birdie at the par-5 18 before pumping a wedge into a back bunker with his approach. “Just a bad shot,” he said with a smile. His bunker shot was a bit unlucky to land on a collar and trickle out to 15 feet, and he gave a mini-putter raise as the par effort found the hole. Among all golfisms, there is perhaps none truer than not all pars are created equal.

“It was important to have some kind of positive momentum going into tomorrow,” he said.

However, if he is to break the tour’s wins record on Sunday, he’ll need to chase down one of the hottest players in the planet in Rahm. And Woods knows it.

“I still got to go out there and post a low one tomorrow, still got to make a bunch of birdies tomorrow and move up that board.”