Thomas: “I’m getting closer and closer” to making a European Tour cut 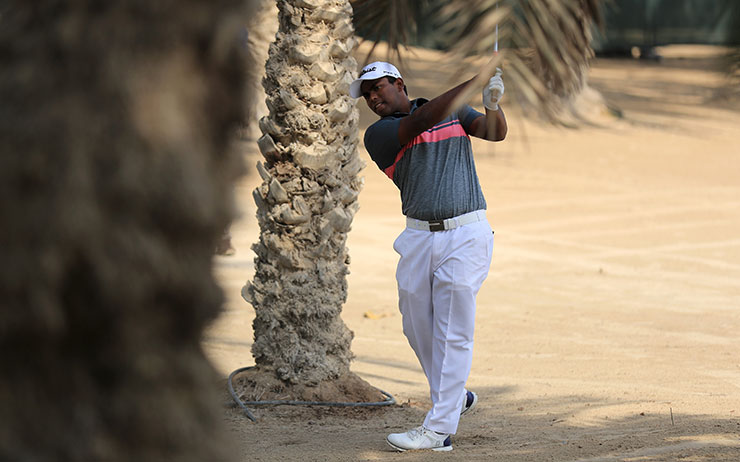 Rayhan Thomas will work on straightening out his occasionally uncooperative driver in a bid to make his first European Tour weekend at the Omega Dubai Desert Classic in a fortnight.

The 17-year-old Dubai-based Indian amateur was disappointed but not disheartened after missing the cut at the Abu Dhabi HSBC Golf Championship following rounds of 72-75 on The National.

The Tiger Woods’ headlined Desert Classic from February 2-5 will be the Dubai Creek Golf & Yacht Club member’s third European Tour start via a second sponsors invite. He qualified for last year’s Qatar Masters before shooting 79-75 in Doha and is clearly making progress after finishing three over in Abu Dhabi, five shots shy of cut mark.

“I’m ok, a bit tired but still pretty happy with it,” Thomas said.

“I was pretty close, [so] a bit disappointed. But I can’t complain. I had a great tournament, learned a lot, played with some great players [England’s Sam Walker and Scotland’s David Drysdale]. It gives me a lot of confidence, gives me a little something to work on.”

A pair of stray drives cost him dearly Friday after an impressive opening round, particularly given the quality of the field assembled for the 12th edition of Desert Swing opener. He was in exalted company with US Masters Champion Danny Willett (+6) and reigning DP World Tour Champion Matthew Fitzpatrick (even par) also missing the cut.

“It was going pretty steady initially, then on the 5th hole I blocked my drive right and had to take an unplayable. And then on six, I pulled it left and had to chip out, so two bogeys back-to back killed me on the back nine. And then on the next few holes I was just standing up, trying to keep it somewhere in play,” he said.

“I just need to work on keeping it straighter off the tee and it should be good for Dubai.

“It’s good to have that week break to recuperate and get my head straight. Right now my head’s going to be all over the place, a bit disappointed.

“So just get my confidence back a bit and get ready for Dubai. Talk to both my coaches and my parents and see what we have to do better. This is my second European Tour event, I’ve got my third coming up in two weeks, so getting closer and closer.”