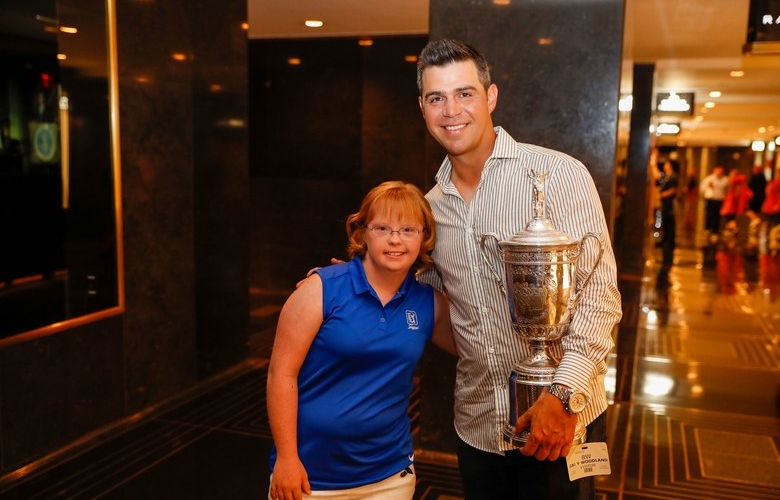 Copyright USGA/John Mummert
U.S. Open champion Gary Woodland seen in the lobby of NBC with golfer Amy Bockerstette, who has Down syndrome and from whom he drew his inspiration from at the US Open.

By Ryan Herrington
Among the fringe benefits of watching Gary Woodland come through and win the U.S. Open this past weekend at Pebble Beach was to be re-introduced to Amy Bockerstette. Woodland befriended the 20-year-old Special Olympics golfer at the Waste Management Phoenix Open in February, playing TPC Scottsdale’s par-3 16th hole with her in what became one of golf’s all-time great viral videos.

The two became fast friends, and shared a special moment on Sunday night after Woodland claimed the U.S. Open title at Pebble Beach. During Woodland’s press conference after the victory, he connected with Bockerstette via Facetime and noted how she helped inspire him as he was making his late push at Pebble Beach to fend off two-time defending champion Brooks Koepka.

“I used your positive energy,” Woodland told her. “I look forward to seeing you soon. We’re going to play some golf.”


Little did either of them know just how soon they’d be seeing each other. On Tuesday morning, Bockerstette was on the “Today” show with her father. As the interview went on, the hosts asked about playing with Woodland and then told her they had a surprise.

U.S. Open champ @GaryWoodland stopped by to surprise Amy Bockerstette, one of his biggest fans who cheered him on during his big win.

“The world needs a lot more of Amy in it. Her attitude, her energy – it was contagious. I thought a lot about you on Sunday.” pic.twitter.com/WXTr6c1Sim

We’ll wait while you grab that tissue.

Woodland was in New York doing a post-U.S. Open media tour. And you could see just how genuine the connection has become between the two.