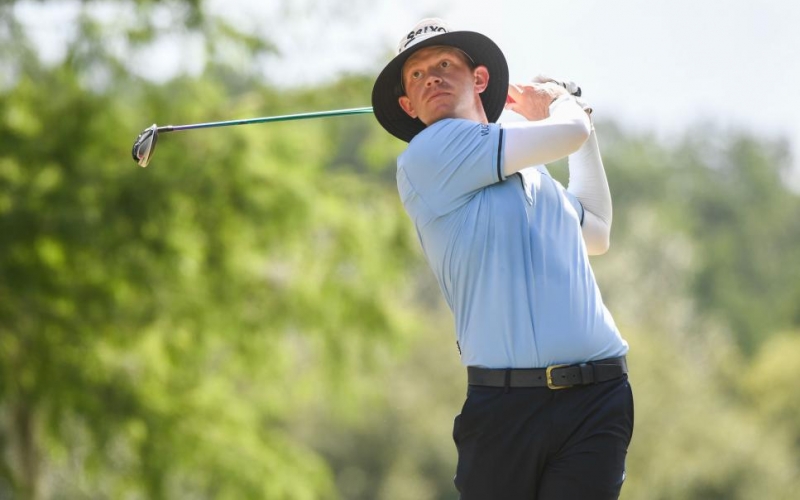 Ben Jared
Jared Wolfe’s days of toiling on the mini-tours appear to be behind him.

There’s no cheering in the press box, but writers can be forgiven for rooting for a good story. And Jared Wolfe is a good story.

The 32-year-old Korn Ferry Tour pro from Louisville, Ky., carried a three-stroke lead into the final round of the Wichita Open, then shot a final-round 71 on Sunday to secure a one-stroke triumph. The victory was Wolfe’s second Korn Ferry win of the 2020 season, after he grabbed his first in the Bahamas in January. It all but locks up a PGA Tour card for the 2021-’22 season; he is now fourth on the KFT points list, with the top 25 getting the bump to the big leagues. And it continues a remarkable career turnaround.

Jared Wolfe looks for his 2nd KFT win this season today, he leads by 2

nstead, Wolfe wandered the mini-tours, having little luck but never giving up on the dream. In 2019, the former college golfer at Murray State played the PGA Tour Latinoamerica circuit, winning once and placing third on the Order of Merit to get his KFT status for 2020.

Yet, with newborn daughter, Khloe, now to support, Wolfe and his wife, Kelsey, had made a deal.

“I had to re-assess what the future looked like, and do it honestly,” Wolfe told the Florida Times-Union during the summer. “My wife and I decided that I needed to be on either the Korn Ferry Tour or the PGA Tour from here on out, or find something else to do.”

The win in January, which earned him $108,000, easily the largest payday of his career, meant Wolfe had KFT status through at least the end of 2021.

With a new optimism about his pro golf career, Wolfe then was faced with the disappointment of the season being put on hold in March due to the COVID-19 outbreak. He and his family, who live near Ponte Vedra Beach, Fla., were ready to hit the road for the tour’s next event when they got news that things were shutting down.

“Everything happened so quick at the start of the season,” he said. “Winning early, looking forward to a great season and then getting on the PGA Tour next year, and then the coronavirus happens. We had the car packed to drive to Louisiana [in March] and my wife woke me up the middle of the night to show me to alert that the next events were canceled. It’s been a weird feeling.”

Wolfe kept his game sharp, lucky to feel like he didn’t have to do too much. “I didn’t have a swing change I want to make, and I didn’t want to sit on the range for eight hours a day and get burned out.”

That allowed him to use do something else during the downtown to help make ends meet with no money from golf coming in. Wolfe joined with two friends who own a medical sales company to help supply COVID-19 tests to urgent care clinics. Wolfe sold and raised awareness for PCR (Polymerase Chain Reaction) tests, approved by the Center for Disease Control, to turn around results for doctors and patients without the need to send out cultures.

Since the KFT restart in June, Wolfe has played 11 events, missing just two cuts. He was confident the experience in the Bahamas, where he was the 54-hole leader and then managed to hang on to win, would help him in Wichita.

“I know my game right now and I know it’s solid,” Wolfe said on the eve of the final round. “If I play my game, I feel like things should go well.”

Wolfe’s jump to the PGA Tour can come even earlier than fall of 2021. Should he win a third KFT event before the end of the 2021 season next August, Wolfe would earn a “battlefield promotion” and be able to jump immediately to the PGA Tour.