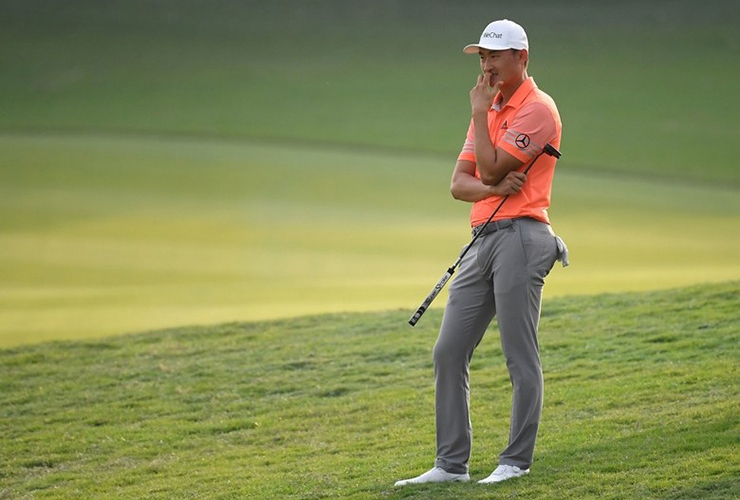 Haotong Li wonders what might have been on Saturday at the WGC HSBC Champions, where he held the lead at 13 under on the front nine only to finish at six under after a disappointing two-over 72. (Ross Kinnaird/Getty Images)

By Ryan Herrington
Haotong Li sits tied for 15th after 54 holes of the WGC-HSBC Champions, nine strokes back of Rory McIlroy. It’s a position few could hardly have imagined the 24-year-old Chinese native would be in after 42 holes.

Li, the leader of the tournament after the first round, made five birdies over his first six holes at Sheshan International to start his third round on Saturday. He had taken the lead at 13 under and bolstered the storyline many in Shanghai had hoped to see play out: one of China’s own winning the title in the most prestigious golf tournament held in the country.

Despite bogeys on the eighth and 10th hole, Li still had the local galleries excited … until the 13th hole. On the 437-yard par 4, Li was in a greenside bunker with his approach and got a little cute with his third shot.

Haotong Li picked his bunker shot on the 13th hole clean, and his ball found the water.

Sitting T4 and two shots back at the time, he finished with a triple bogey, which dropped him 5 shots off the lead.

He is currently -8 and T10 at WGC-HSBC Champions. pic.twitter.com/cCIJYIZzDp

As the commentators point out, Li’s bladed sand shot found the penalty area over the green, ultimately leading to a disastrous triple-bogey 7. To his credit, he bounced back with a birdie on the 14th, but then made three more bogeys to close out a two-over 74. The frustrating finish resulted in a highly disappointing 32-42 front-nine/back-nine split for his round and left him at six under for the tournament.