If they’re crowning a first-time major winner on Sunday, Tommy Fleetwood asks why not him 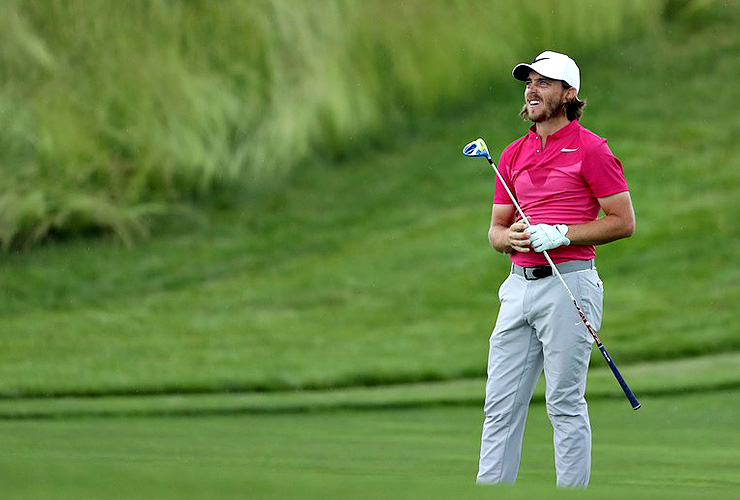 For a man whose best-ever performance at any of golf’s four major championships is a pedestrian T-27 in the 2015 U.S. Open at Chambers Bay, Tommy Fleetwood is doing rather well in the 117th edition of America’s national championship. After a four-under-par 68 on Saturday, the 26-year old Englishman sits 11 under par for the week and one shot off the 54-hole lead held by Brian Harman.

It could have been better, too, for the Englishman. Bogey-free for the day standing on the 18th tee, Fleetwood suddenly went “walkabout” around the final green. Just short in two on the par-5 home hole, his poorly-struck chip came up well short. From there, the former top-ranked amateur putted off the back of the green and down a steep slope. Disaster was looming. But Fleetwood’s next effort was his “best of the day” and a bogey went on the card. Not good, but not calamitous.

“That showed me what can happen when you get out of position on this golf course,” he said. “I wasn’t out of position all day until that point. It’s one of those things you almost start to take for granted when you are playing well. But it doesn’t take much to get the reminder.”

It was the second time in four holes that fortune had favored Fleetwood. On the drivable par-4 15th, Fleetwood’s aggressive tee shot finished left of the green in some of Erin Hills’ now legendary fescue grass.

“I hardly missed a shot today,” he continued. “And I felt very comfortable with my swing. But I did get a massive break on the 15th. If I’d have been two yards either way in the rough, I would have been stuck. I just happened to be in the perfect spot. So you have to be careful. It’s all right going for everything, but the course can easily catch you out.”

As ever, Fleetwood, one of the best ball-strikers on the European Tour, used his powerful and consistent long game as the basis for his fine score. Only once did he miss a fairway, a fact that translated into a tally of 15 greens in regulation. Not surprisingly given the obvious strength his game, a weather forecast predicting strong winds for the final round provoked nothing more than a wry smile from the native of the coastal town of Southport, host to next month’s Open Championship at Royal Birkdale.

“I’m happy if it blows,” he said. “But I don’t mind either way. The course is probably nicer to play without the wind. But if it does blow, then you’ll definitely have to play proper golf. It will play a lot tougher.”

And the life-changing prospect of victory?

“I’ve pictured myself winning the U.S. Open a lot of times before now,” he admitted. “But doing that all night is not going to help and not make any difference. Today, I felt really good and played really well. If I wake up with the same feelings tomorrow, I’m going to have a chance. Hopefully I do. I’ll take it one step at a time.

“This is my first time in contention in a major. So whatever happens I’ll be doing my best and seeing how well I can finish. That’s all I can do. But it will be a pleasure to go out on a Sunday trying to win a major. I can’t say how much it means to have one of my best mates on my bag [caddie Ian Finnis]. If I go out and shoot 65 or 85, I can still walk off the last green with one of my best mates in the world. I always take a lot of comfort in that fact.”