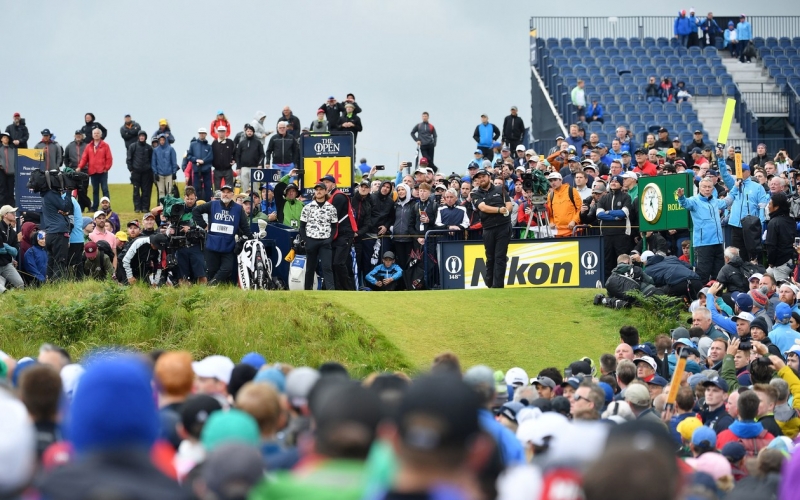 By Max Adler
PORTRUSH, Northern Ireland — Shouts of “C’mon Sh-yane” segued to “Ole” chants at the 16th hole, the long par 3 called Calamity Corner, when Shane Lowry carved a low, long-iron left of the green and watched it peel back to the front edge. With a six-shot lead and 50-foot ravine of wet salad on the right, it was the bloody perfect shot.

Tommy Fleetwood’s attempt flew twice as high and hardly drifted. You can’t spell Lowry without “low,” and that trajectory is part of the story of how a handsy Irishman with a long and flowing old-school action outlasted an Englishman with a more modern, controlled move in the wet crosswinds off the Irish Sea.

“Lowry’s rhythm hasn’t wavered once, it’s beautiful,” said David Leadbetter walking in full waterproof gear, doing his best to keep his Sky Sports microphone dry while off air. “Both of these players have such wonderful short games, delicate, and that’s what a lot of it comes down to on a day like today.”

Not one golfer who teed off in the afternoon would finish their round under par.

The largest throng of reporters and photographers followed the final group, of course, wearing paths through the fescue and thorn berries like rabbits, but thanks to the firm directions of lead hole marshal Bernie McGuire, TV viewers hopefully didn’t see much of us. Besides keeping the notebook dry, you see, staying out of the way is the name of the game.

RELATED: How ‘the talented little fat lad with glasses’ became an Open champion

Kneeling to avoid the ire of the crowd, you hear from over your shoulder at the seventh, “Ah no, take the feckin’ putter, Shane boy.” Lowry is just a few paces short of the par-5 green in two and holding a wedge, in almost the same exact spot where he failed to make birdie in Saturday’s third round. He lobs it again—unnecessarily, at least one fan would say—but this time cleanly and converts the bird. Off tight links turf and with a major championship on the line, words can’t express how good a putter looked from there. Hugo Boss is the sponsor of every free hat at this Open, and that shot selection certainly was, too.

Lowry marches to the eighth tee 18 under with a six-stroke lead. The heaviest rains are about to unfurl, and along with them some bogeys, but it’s OK. As the crowd moves forward, a young man on behalf of the R&A remains behind to remove the flag from the stick, rolling it and tucking it away in a backpack. Like Lowry, he’s just counting down the holes. 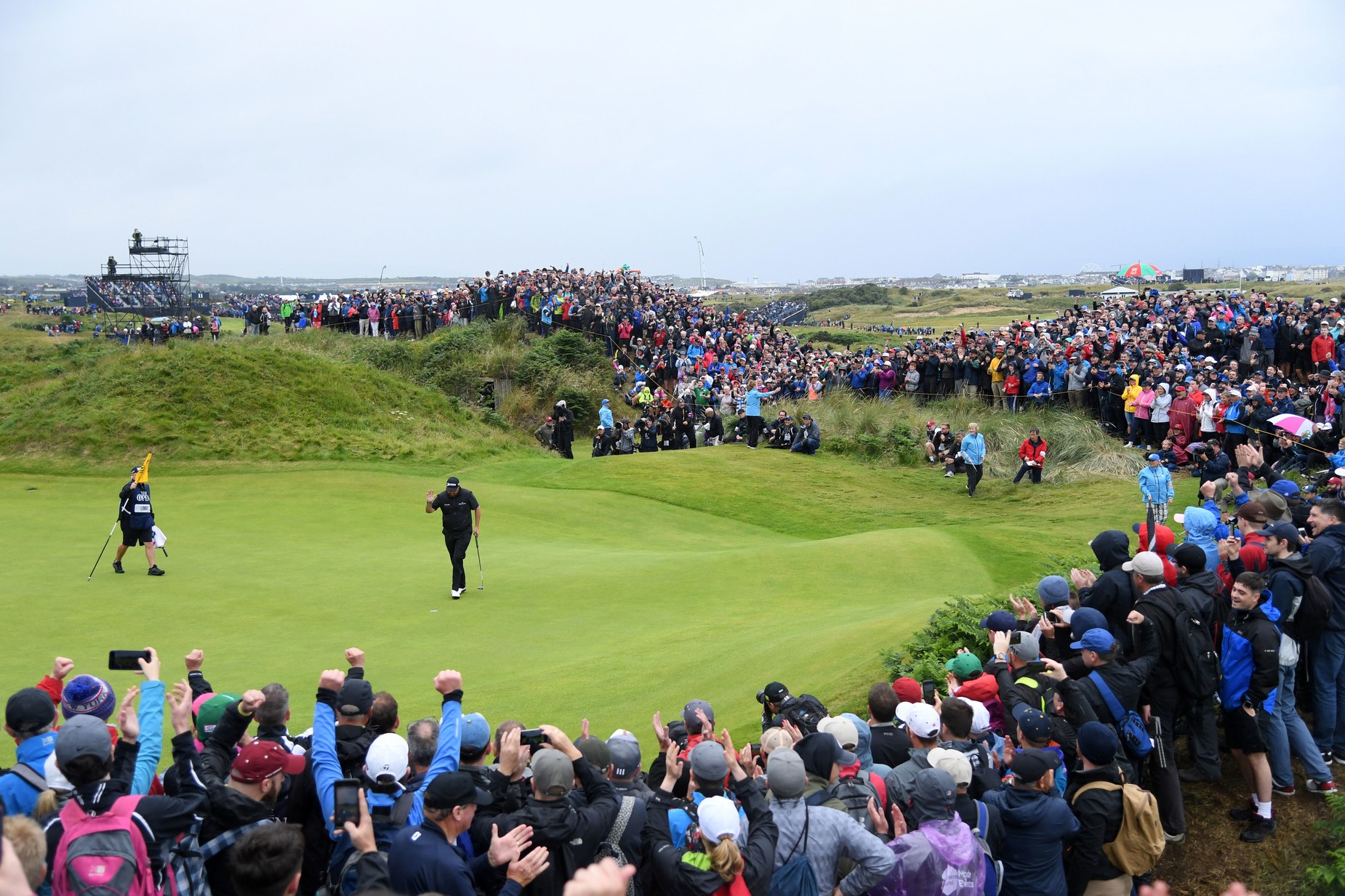 Jan Kruger/R&A Lowry acknowledges the crowd on the fourth hole during Sunday’s final round.

The crowd is so overwhelmingly for Lowry—carrying him forward while even super-fit Fleetwood is starting to look drained—that it’s hard to tell where his shots are ending up. On blind approach shots (of which there are more than normal in the flat light), there’s just no telling where a Lowry approach has finished. Ten feet, 40 feet and even greenside rough tend to all generate the same, soccer-stadium reaction.

Back to the 16th. It’s a thin light blue line that keeps the beer and rain-soaked crowds from enveloping Lowry. Light blue, you see, is the color of the rain jackets the marshals have been issued.

“The last three or four holes were kind of a bit of a procession for Shane, and he did great,” Fleetwood would say after it was over. As for the very beginning, that was Fleetwood’s chance. “The first hole, if you look at it, I have six or seven feet for birdie, [Lowry] has six or seven feet for bogey. I hole, he misses, and we’ve got a one-shot gap.”

But that’s not what happened. It was exactly the opposite; Lowry making and Fleetwood missing. “That settled me an awful lot,” Lowry said, who then held control the whole way in to become the winner of the 148th Open Championship.

Although it’s not really the 148th Open, it’s the 147th. The first “championship” held at Prestwick in 1860 wasn’t open to amateurs, only professionals, so it wasn’t technically an “Open.” But that little fact matters not one bit to Shane Lowry or the roughly 40,000 spectators pouring out the exit in driving rain. An Irishman won the Open in Northern Ireland.