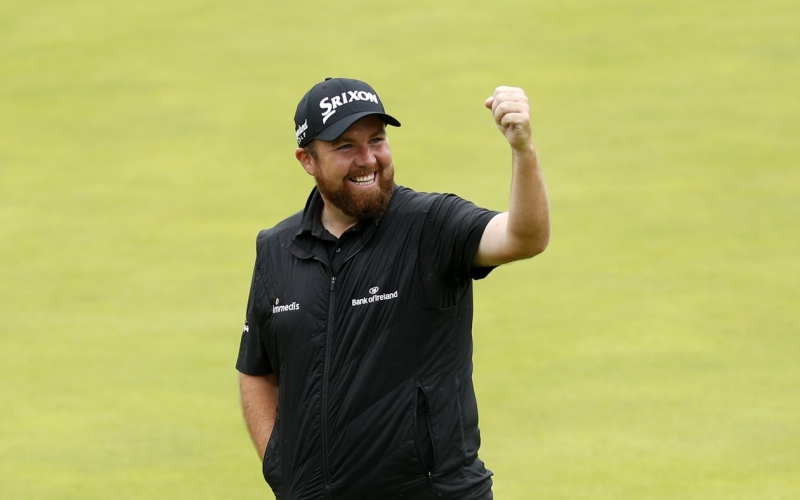 By John Huggan
PORTRUSH, Northern Ireland—Swing guru Pete Cowen tells a story of a now far-off coaching session where he cast his learned eye over the Irish Boys squad. The star of the show was a wee kid by the name of McIlroy. You may have heard of him. And at the end of the day, the officials present were keen to hear what Cowen thought of their potentially outstanding prospect.

“Rory’s going to be great,” confirmed the man who these days works with the likes of Brooks Koepka and Henrik Stenson. “But there’s another good one out there. The little fat lad with the glasses.”

Today, the spectacles have gone. And a beard has grown. But the talent so astutely identified by Cowen is still there. In fact, it has matured nicely. Shane Lowry went on to win the Irish Amateur and the Irish Open — before he turned professional. There has been a World Golf Championship victory too, as well as a couple of other European Tour titles. And now, the 32-year-old County Offaly native is the Open champion.

So Cowen clearly knew what he was talking about, even if Lowry’s three-birdie, four-bogey final round 72 at Royal Portrush en route to claiming the claret jug was far from straightforward. But that was to be expected in weather that veered between merely unpleasant and close to unplayable. In the end, 15-under par for the 72-holes represented golf of the highest order and was, more importantly, six shots better than runner-up Tommy Fleetwood. No one else was within eight of the new “champion golfer of the year.”

“Shane hit the right shots, even if they weren’t always great shots,” said a disappointed Fleetwood. “But it was very difficult out there. He never lost control of himself. And he made some key putts at key times. He did better in those moments than I did today.” 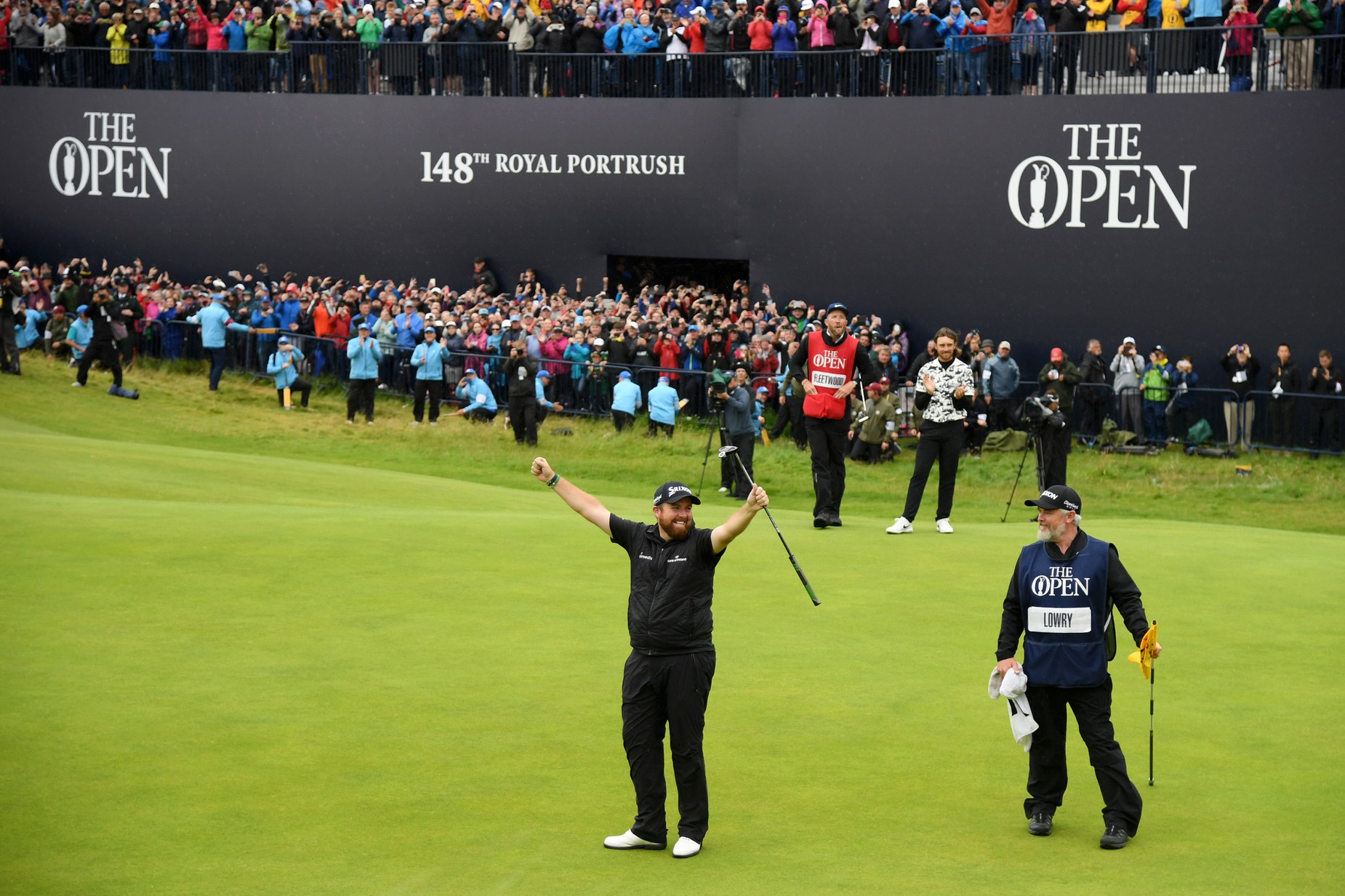 One of those came as early as the first green. Immediately after watching Fleetwood miss from maybe 12 feet for an opening birdie, Lowry holed from 10 feet for a bogey. Had the Englishman holed and the Irishman missed, the lead would have shrunk to only one shot.

Thereafter, the only moments of crisis were generally self-inflicted — albeit understandable in the fearsome conditions. A run of three bogeys in four holes from the ninth reduced Lowry’s lead to four with six to play. But when Fleetwood made a double-bogey six on the 473-yard par-4 14th it was all but over. From there, Lowry cruised home with four closing pars.

“I feel like this is an out-of-body experience,” he said in the immediate aftermath of a victory that will pay him a record $1,935,000. “I was so calm coming down the last. It was so hard out there. I wasn’t doing so well around the turn. But everyone else was struggling. I just had to focus on staying as far ahead of Tommy as I could.

“I talked a lot to Bo [Martin], my caddie. I couldn’t stop thinking about winning. But that was after six or seven holes. But he was great, talking in my ear. I can’t wait to wake up tomorrow morning and realize what I’ve done.The fans have been unbelievable. The next event I play will seem boring. They were with me all the way and kept me going.”

The biggest victory of Lowry’s decade-long professional existence comes in a year that has promised much after two disappointing seasons. Since finishing first in Abu Dhabi back in January, Lowry’s form has shown signs of life. A T-3 at the RBC Heritage was closely followed by T-8 in the PGA Championship and T-2 at the RBC Canadian Open. But in the wake of a hugely deflating loss in the 2016 U.S. Open at Oakmont, Lowry’s career went backwards. Armed with a four-shot lead entering the final round, Lowry frittered away his advantage and eventually lost by three to Dustin Johnson. It was a defeat from which he needed time to recover.

In the five PGA Tour events he played after Oakmont, Lowry’s best result was T-36. In 2017 he managed only one top-10 finish on the PGA Tour. One year later, that number fell, his despair reaching its nadir at Carnoustie during the 147th Open Championship. After missing the cut, Lowry sat in his car and cried.

“It is one of those things,” he said with a shrug. “I feel like I should have won the U.S. Open. But there are plenty of top players who have led big events with 18 holes to play and not won. So I’m hardly unique in that. I just wasn’t aggressive enough on Sunday. I had played three rounds of world-number-one golf. And on the last day I made a good par at the first. Then, at the second — a par-4 I could have driven — I laid up. I was trying to maintain my lead instead of trying to win the tournament. When I am in that position again I will go out there to win instead of protecting my lead.”

Prescient words from a man who has always known his own mind, always done things his own way. At school he was the only one of the 500 kids who played golf.

“I play the game the way I see it,” he said. “There are times when I’m not playing great and thinking too many technical thoughts. But if someone asks me how to hit a fade, my artistic side takes over. I think ‘fade’ and hit a fade.”

Still, it is for his short game prowess that Lowry has so far been best known. His chipping contests with Ryder Cup skipper Padraig Harrington are legendary and closely-contested. And off the course Lowry can be a tad unorthodox. He and wife Wendy — who added daughter Iris to the clan in 2017 — had their wedding planned for New Year’s Eve 2016 until they came to the conclusion that neither wanted a big “do.”

“We started to realise we could only have a certain number of guests, which meant making decisions and disappointing people,” Lowry said. “Then my wife read about an Irish couple who just went off to New York, hired a photographer and did it. So we did that. We had the best week ever. We stayed in the Mandarin Oriental on Central Park, got married on the Tuesday [Aprll 12th] and stayed until the Friday. We came home and had a big party June 10th. I think that’s the way to do it. And I tell all my friends that.”

A genial soul, Lowry has many of those. In the immediate aftermath of the second round 65 that proved to be one shot too many for McIlroy, the 2014 Open champion was quick to express support for his former foursomes partner in the Irish national team. In return, McIlroy’s presence in his teenage life is something Lowry views as a huge plus in his own development.

“I got to play with a superstar,” he said. “And when I was younger playing amateur events, thousands of people used to come and watch. Because of him. So I was playing in front of big crowds early on. It was all great training for me. At the end of each round we would speak with the journalists. So when I won the Irish Open as an amateur, I was used to playing in front of big crowds and answering questions afterwards. I’d done plenty of interviews. That all helped.

“The minuses were that I was always living in Rory’s shadow. When I turned pro and even now people in Ireland expect me to be as good as Rory.”

Lowry isn’t quite there yet. But, along with compatriots Harrington, Darren Clarke and Graeme McDowell, he and McIlroy have now amassed 10 Grand Slam titles since 2007. It is a remarkable record for a small nation with a population of fewer than five million souls.

But surprising? Not so much to Lowry. Even as he struggled on the PGA Tour he had enough faith in his ability to describe himself as a “big-time player.”

“I think the bigger the situation you put me in, the better I get,” he said in May last year. “As a golfer you have to be very self-confident. I feel like you can put me anywhere — the first tee or the 18th fairway at the Ryder Cup — and I won’t be fazed by it. My problem was getting into those situations.”

This week he did just that. He surely wasn’t perturbed. And all of Ireland rejoiced. As former Ryder Cup captain Paul McGinley said on Sky television, “it’s going to be a helluva hooley.”