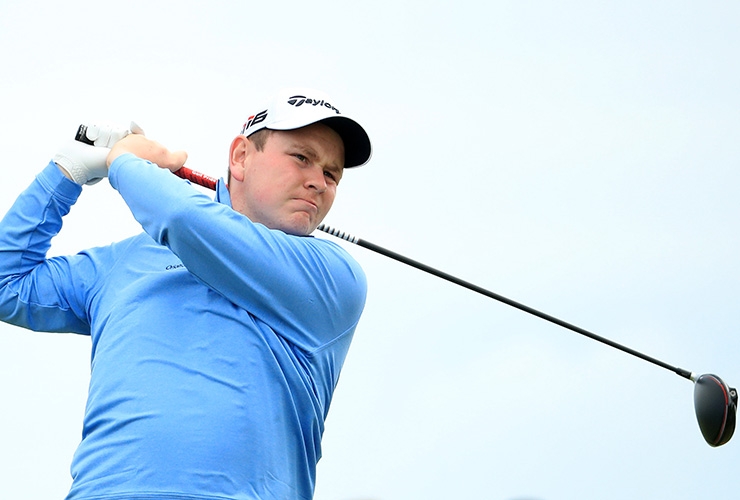 By Kent Gray
After a memorable opening 68, Robert MacIntyre was in the headlines at The Open again on Friday, this time for calling out two-time PGA Tour winner Kyle Stanley for not yelling fore on the penultimate hole of the second round at Royal Portrush.

It will be a shame if the fallout from the perceived lack of etiquette clouds MacIntyre’s play after a second-round 72 saw the Scotsman comfortably advance to the weekend in his major championship debut.

The 22-year-old lefty was one of only two players with MENA Tour links to survive the 36-hole cut which fell at +1. American J.B. Holmes shares the overnight lead with Irish Open and reigning Abu Dhabi HSBC Championship titleholder Shane Lowry at -8 –- six strokes ahead of MacIntyre. With rounds of 70-71, Englishman Callum Shinkwin, the winner of the MENA Tour’s 2019 Omega Dubai Desert Classic Shootout, starts the weekend at -1.

MacIntyre was unimpressed with how Stanley failed to shout fore after watching the American’s wayward tee shot on the 17th hit the mother of the Scotsman’s caddy, Greg Milne.

“Every golfer, from amateur to professional, knows what to shout. It’s pretty disappointing,” MacIntyre told the BBC.

“I told him I didn’t like what he was doing and asked him to please shout fore over the weekend. He didn’t really accept that, but I stood up for the etiquette of the game.”

MacIntyre couldn’t get his putter going on Friday in his one-over 72 but the European Tour rookie is just happy to have a shot at the claret jug.

“It’s been a success so far, just to make the cut,” said MacIntyre who started the week 21st in the Race to Dubai standings and a shoo-in to tee it up at the DP World Tour Championship at Jumeirah Golf Estates in November.

“Tee to green I was patient and stuck to my guns. I feel my game is there to be challenging. The scores haven’t gone away, so a good run tomorrow and I’m right back in it.”

Meanwhile, a gritty Friday 68 – 10 shots better than his opening round – wasn’t quite enough to get MENA Tour Order-of-Merit (OOM) leader Matthew Baldwin into the weekend. The 33-year-old Englishman spoke with the MENA Tour’s Joy Chakravarty after finishing +4, three shots outside the cut.

Rory started Thursday with a quad bogey, @mattbaldwin26 with a triple.
Rory ended Rd1 with a triple, Matt with a double.
Rory finished today +2 after being +8. Matt finished +4 after being +9.
Unfortunately, both missed @theopen cut despite their brave efforts. pic.twitter.com/scpCm11eHc

What a shame that one shot has cost me a good Open Championship but what an experience to play! Lots of things to learn from and today I proved that with the right attitude I can achieve my dreams!! Onwards and upwards…. again ??️‍♂️⛳️

Curtis Knipes, the MENA Tour amateur OOM leader, had his heart set on the silver medal for low amateur honours after an opening 72. But a Friday 79 saw him miss the cut on +9.

Indeed, the silver medal won’t be awarded at Royal Portrush as none of the six amateurs made the cut; Japan’s Takumi and new British Amateur champion James Sugrue were the best at +2.

The dream run of our Amateur Leader Curtis Knipes has come to an end at @TheOpen. He cant’s recover from a horror triple bogey-bogey start and in tough conditions. But Knipes should be very proud of his achievement pic.twitter.com/I7quRQbyJ1

Thailand’s Jazz Janewattananond (2017 Mahasamutr Open) finished +5 while MENA Tour patron Darren Clarke was left to rue a triple-bogey seven on the 36th hole which saw him drop to +3 and miss a fairytale weekend on his home course by two strokes.