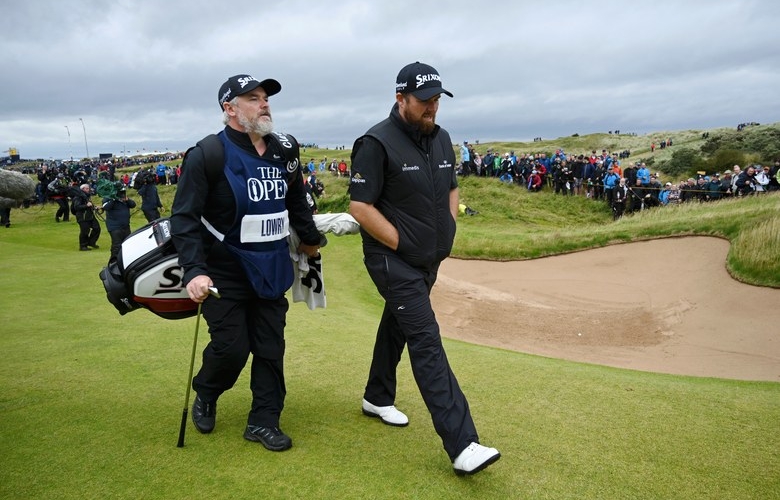 Lowry of Ireland and his caddie Bo Martin walk up the 18th fairway during the final round of the 148th Open Championship held on the Dunluce Links at Royal Portrush Golf Club on July 21, 2019, in Portrush, United Kingdom. (Photo by Warren Little/R&A/R&A via Getty Images)

By Brian Wacker
PORTRUSH, Northern Ireland — A year ago, Shane Lowry sat in his car after the opening round of the Open Championship at Carnoustie and cried. A day later, he missed the cut.

“Golf wasn’t my friend at the time,” he said Sunday night from Royal Portrush. “It was something that had become very stressful, and it was weighing on me, and I just didn’t like doing it.

“That just shows how fickle golf is. Golf is a weird sport, and you never know what’s around the corner. That’s why you need to remind yourself, and you need other people there to remind you. You need to fight through the bad times.”

Walking up the 72nd hole of the 148th Open, a few hours north of where Lowry is from in Clara County, Offaly, a once-unimaginable scene in these previously troubled parts unfolded, with tricolor Irish flags waving in the crowd and chants of “Ole, Ole Ole Ole!” The only tears for Lowry on this day were of joy.

All week long, Lowry had talked about embracing the enormity of the moment, rather than shying away from it. If there was pressure, it meant that something good could happen. Despite the heavy burden of a nation across his broad shoulders, and the slog of a wet and windy final round, he cruised to a six-stroke win over Tommy Fleetwood to take home the claret jug and his first career major championship.

Not that long ago, it was hard to even imagine for Lowry.

Twelve months ago, after missing the cut in the Open for the fourth straight year, Lowry parted ways with caddie Dermot Byrne, ending their nine-year partnership. The split was painful but proved re-energizing for Lowry, who last September added veteran looper Bo Martin to his bag and in short order started to see improvement in his play.

When Martin took over, Lowry was ranked 86th in the world. In short order, he won the Abu Dhabi HSBC Championship in January, overcoming a blown four-stroke advantage going into the final day to hang on, then had top 10s at the RBC Heritage, PGA Championship and RBC Canadian Open.

Martin, who grew up 90 minutes south of Portrush in Ardglass, had caddied for a number of players, including Gary Murphy, Peter Lawrie, Alex Levy and Lucas Bjerregaard, and was contemplating a career change when Lowry’s coach, Neil Manchip, called him last fall.

“I met him for a coffee and breakfast in Dublin,” Martin said. “He said, ‘Let’s do Portugal and see how it goes.’ He finished sixth, and we kept going. I said this is what I’m gonna do. This guy is a good player.”

It turned out that Lowry, who had won the Irish Open in a playoff as an amateur in 2009, just needed some convincing. Never mind that he had won in Portugal in 2012, at the WGC-Bridgestone Invitational in 2015 and led by four shots going into the final round of the 2016 U.S. Open. His runner-up at Oakmont was tough to get over, given that he trailed by one through the first 12 holes in the final round only to make three straight bogeys on Nos. 14, 15 and 16 to finish second.

Three years later in Abu Dhabi in January, he nearly suffered the same fate before coming out on top. Still, a missed cut at the Masters led to a four-hour chat with Manchip and Martin the next week. It was a steady rise from there, with three straight finishes in the top eight.

Then there was the Open and a trip to Bushmills with his caddie and his coach on the eve of the championship, the first Open played in Northern Ireland in 68 years.

“I was quite nervous and anxious Wednesday evening, and we went for that chat,” Lowry said. “You come up here, and I suppose the other lads would have had it as well, G-Mac [Graeme McDowell] and the lads. The last thing you want to do is come up here and miss the cut. … And that was kind of in my mind. I wanted to play at least four days and wanted to put up a good show for myself.

“It really settled me down. I left the Bushmills Inn the other night, and I really felt like I could go out and perform to the best of my ability the next day.”

After an impressive bogey save following a worm burner off the opening tee, Lowry made three birdies in a four-hole stretch from Nos. 4 to 7 to pad his lead to six. Bad weather and bogeys on three of his next four holes around the turn followed, but it helped that everyone else around him was struggling in the conditions, too.

It was about what Lowry didn’t do that proved just as pivotal.

“When he holed that putt for bogey at the first, he probably went to the second tee feeling like he won the first hole,” Padraig Harrington said. “When you look back, he was never in trouble. He made some bogeys, but he never looked like he was taking any more than a bogey out there. He’s got a strong game for these conditions.”

And a strong head, too.

“He played really well,” Fleetwood said. “He hit the right shots. Didn’t always hit great shots. It was very difficult out there. Never lost control of himself. He made some key putts at key times, even down to the first hole, you know. The first hole, if you look at it, I have six or seven feet for birdie, six or seven feet for bogey, I hole, he misses, and we’ve got a one-shot gap, and that’s only after one hole.

“He did better in those moments than I did today.”

And better than the last time Lowry was in the same position at Oakmont three years ago. That day, Lowry had already visualized himself winning before even teeing off. It wasn’t long before things went sideways and he started to doing everything too quickly. “That’s what happens when you play a few bad holes,” he’d said then. “They’re kind of over before you know it.”

As Lowry hoisted the claret jug on Sunday night, things were just getting started.

“He doesn’t have to prove to anybody he’s a good player,” Martin said. “But he proved it to himself how good he was today.”