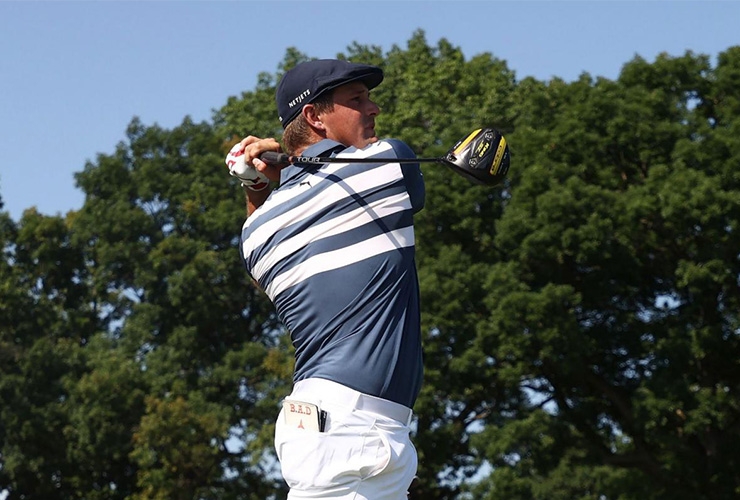 By Brian Wacker
The Bryson DeChambeau 240-pound era is here. It arrived, perhaps appropriately, in a city known for its muscle (Detroit), and in booming defiance, with little in the way of apologies to Donald Ross, the camera crew or the field he flattened with the force of a car crusher on his way to a three-stroke victory at the Rocket Mortgage Classic on Sunday.

The win was the sixth of DeChambeau’s PGA Tour career, but the first for the souped-up version of the 26-year-old.

“This is a little emotional for me because I did do something a little different,” he said after shooting an awfully sporty seven-under 65 to leave Matthew Wolff in his exhaust fumes. “I changed my body, changed my mindset in the game and I was able to accomplish a win while playing a completely different style of golf.”

In doing so, DeChambeau has gone from a self-proclaimed physics genius—often criticized for playing too slow—to golf’s overstuffed king of swing. Along the way, he’s emerged once more as the most polarizing figure in the sport (Patrick Reed is too much the pure villain) and its most mesmerizing, too. From his strongman eating regimen, to the bemoaning of cameras filming his negative reactions as damaging his brand, to the way he has dismantled one golf course after another in Paul Bunyan fashion, DeChambeau has transformed into must-see TV.

And he has perhaps transformed golf, too. Though the style is debatable, the results, for now, are not.

On Sunday, DeChambeau, who began the afternoon three strokes back, averaged 350.8 yards a pop off the tee on his measured drives (and 329.8 yards on all drives) to lead the field. Among them was a 367-yard bomb on the 18th—the most difficult hole on the course—on his way to a third straight birdie. It capped the lowest score of the day and DeChambeau’s lowest score of the week.

There were other bombs, too.

On the first hole of the day, DeChambeau uncorked a 363-yard drive that landed just 40 yards from the hole. Birdie. Another one followed at the third, after a 355-yard launch, and again at the fourth, where he *only* drove it 337 yards. Then, after a 366-yard drive to set up another birdie on the seventh, the lead was his.

There was no slowing down, either.

“He understands what is the key to gaining the biggest advantage and that’s distance, and mega distance,” said Kevin Kisner, who finished in third, five strokes back.

Still, there have been critics. 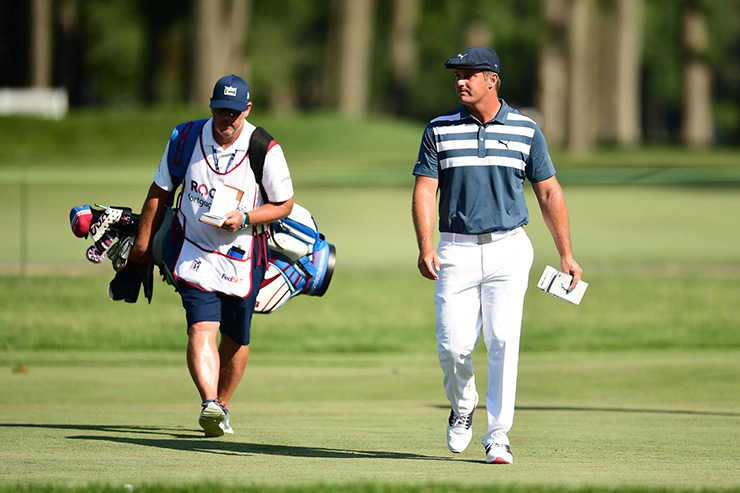 In the previous six starts DeChambeau hadn’t finished outside the top eight but also hadn’t won, despite multiple chances late on Sunday. In short, the closer his ball had gotten to the hole, the bigger the holes in his game.

Yet he stayed the course. Rather than becoming frustrated, DeChambeau seemed emboldened. And this week, it all came together—since the advent of ShotLink more than 15 years ago, there has not been a winner on tour who led the field that week in strokes gained/off-the-tee and strokes gained/putting.

“I’m trying to adapt and overcome, improvise a little bit,” DeChambeau said. “I was able to stripe a drive on 16 and then hit a decent wedge shot in there and I knew I had to make that putt. I knew if I was to make that putt and go birdie-birdie-birdie coming in, it’d be really difficult to beat me and that’s just what I tried to do and I made a 30-footer and that just spurred me on for the rest of the day.”

And into a new era.

Will Sunday’s victory go down as one of those seminal moments in the game, or be just another fad? Time will tell.

Said DeChambeau: “I think the most important thing is that I’ve shown people that there’s another way to do it.”