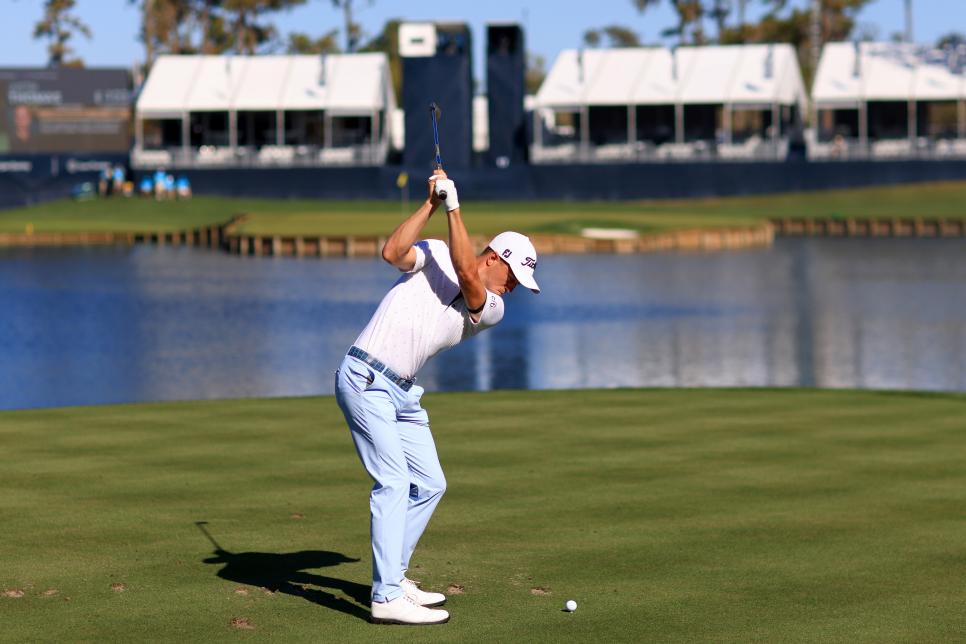 Mike Ehrmann
Justin Thomas plays his shot from the 17th tee during the first round of the Players Championship. His ball went in the water.

By Brian Wacker
One year while doing a preview story about the Players Championship I spent an hour zipping around TPC Sawgrass with long-ago PGA Tour player Mark Carnevale, who lives in the area and knows the course well. When we reached the eye candy of the property—the 17th hole—he lumbered over to the tee box, took exactly zero practice swings and proceeded to knock a 9-iron onto the middle of the green before one-handing his putt within a few inches of the Sunday pin on the far right. Easy.

If only the little 143-yard par 3 was so benign on Thursday.

Three of the water balls on Thursday belonged to Ben An en route to him recording an 11, one shy of Bob Tway’s record 12 there in 2005. Kevin Na also rinsed three Titleist Pro V1xs before chipping in from the fringe for an 8. He later withdrew, citing a back injury after an opening-round 81. Charl Schwartzel dumped two in the drink and made an 8.

Well into the day, the 17th was playing well over par (3.33) and as the second-toughest hole on the course, behind only the perenially difficult 18th. Only 63.45 percent of the field had hit the green in regulation, with some missses that didn’t go into the water having trickled dangerously into the rough or onto the runway that serves as a walkway to the green.

Kyle Stanley, playing in the first group off the 10th hole at 6:45 a.m., was the first to find the water, his ball taking a swan dive off the back after he nearly holed his tee shot there on the fly. Henrik Stenson put one in the water, too, and Patrick Cantlay almost did, his ball saved by the walkway on the back of the green. 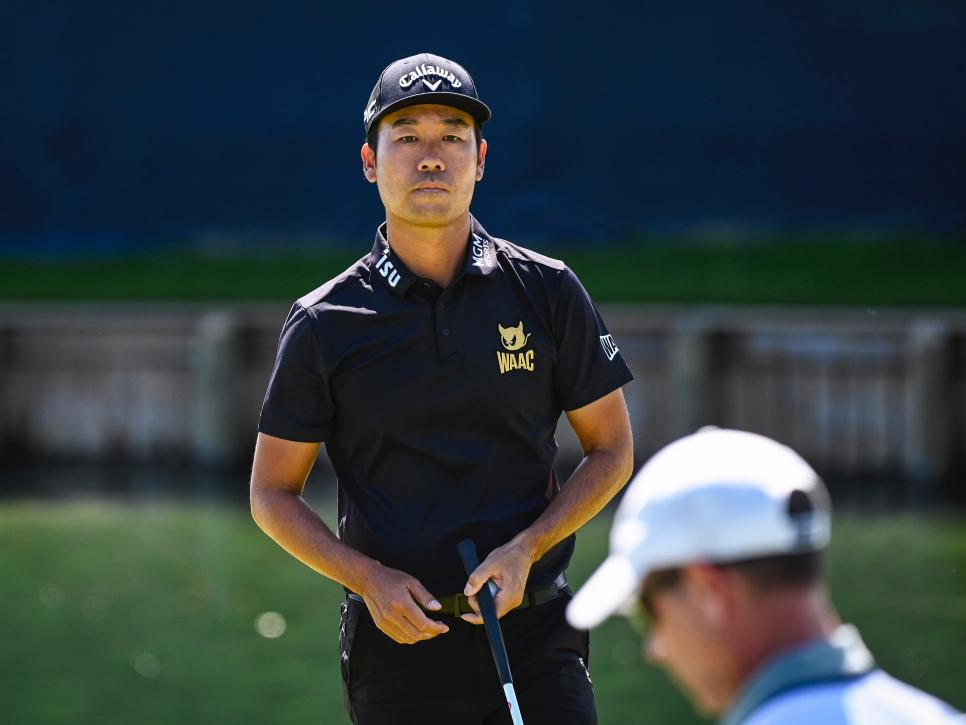 Keyur Khamar
Kevin Na suffered an 8 at the 17th, shot 81 and withdrew from the tournament.

“Greens are super quick, they’re very firm in places,” said Graeme McDowell, who escaped 17 with a par when his tee shot barely stayed on land before he two-putted from 50 feet. “Like the back of the green on 17. I mean, you pitch that ball past the slope at all today and it’s getting a massive hop and going over the back.”

Even the shots that looked good didn’t always end up that way. Jim Herman landed his ball just on top of said ridge, about 15 feet short of the flag. It hopped on by, then trickled into the water.

Louis Oosthuizen was more fortunate. His ball stayed just on the fringe and he saved par. Justin Thomas wasn’t. His took one hop and trundled in.

Why were so many getting all wet?

For one, the pin was just six paces from the back. For another, the green was firm.

“I had a 5-iron on 2 today that rolled out probably eight paces and then I had a pitching wedge on [17] that hole that rolled out like six,” Thomas said. “It doesn’t add up, and they were very consistent over the course except for that hole.

“It always is a little bit firmer for obvious reasons, but especially up there on top, where you have the gradual upslope that if you land it into it, as soft as it is, it’s going to rip back. But then you want to land it up top with the helping breeze, you get it up in the air or a little bit of adrenaline with fans out here now, you can land it pin high and one hop in the water like I did.”

Still, the hole was playing unusually difficult, despite the pin position not being a new one. While there have been only five years when the collective scoring average was under par, and it plays as one of the more difficult par 3s on tour, as we found out in taking a deep dive into the mystery of the hole, it still ranks as just the eighth-toughest hole on the course since 2003.

Last year, it was even easier. There were only three balls in the water in the opening round—second-fewest in any round in tournament history—when the pin was in a similar spot.

Another reason there were so many balls ended up in the drink? As Carnevale said years ago, and was backed up by Paul Azinger during NBC’s broadcast, tour players see a flag and aim at it, particularly when they have a short iron in hand, a prospect made more difficult with more club and less spin.

Well, not all of them.

“I never try and get it back there,” said Lee Westwood, who found land on the right side of the green, two-putted for par from 50 feet and shot 69. “There’s a crown in the middle of that green and I played here years ago, and I played a practice round with Nick Price, who said just try and land it on that crown every day; ignore the flags.