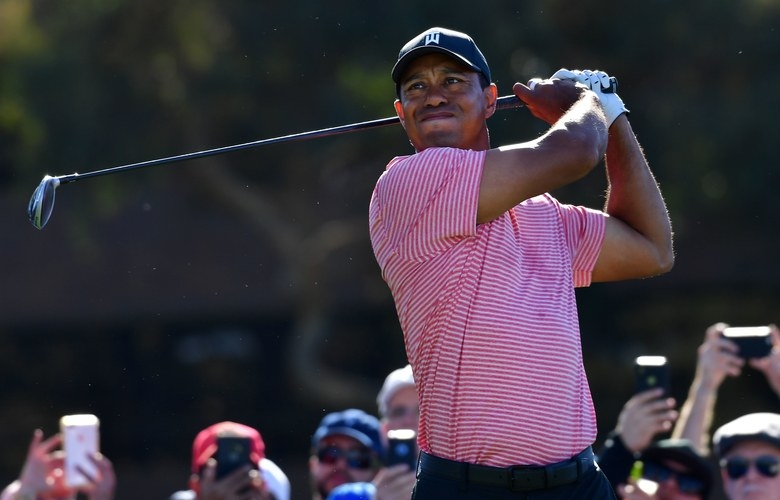 Donald Miralle/Getty Images
Tiger Woods plays his shot from the 14th tee on the South Course during the final round of the 2019 Farmers Insurance Open at Torrey Pines Golf Course on January 27, 2019, in San Diego, California.

By E. Michael Johnson
Earlier today TaylorMade tweeted that Tiger Woods boosted the loft on his M5 fairway wood from 13 degrees to 15 degrees to take advantage of the thin air at the Golf Club de Chapultepec, which is 7,835 feet above sea level at its highest.

Although not a new idea, it’s certainly one that has merit. When the tour used to contest The International at Castle Pines G.C. in Colorado, players would routinely up the loft of their driver to take advantage of the thin Mile High air. The evidence to the benefit of a higher launch at altitude is more than simply anecdotal, too. Trajectory models routinely show a distance benefit that comes from playing at altitude at most launch angles and spin rates, with some increases significant.

How significant? For the sake of doing the exercise, we conducted a quick run of the numbers on such a model using a 165 mile-per-hour ball speed, 3,100 rpm spin rate and launch angle of 12 degrees at sea level. In this scenario, the ball carries 265 yards. We then boosted the launch angle 2 degrees, added 100rpms spin (to take into account the added loft) and calculated at 7,835 feet altitude. The result was a carry of 278 yards—a gain of 13 yards.

The data from last year’s event serves as further proof, with the field averaging a whopping 305.9 yards for the week, with 48 of the 64 players making the cut at 300 yards or more.

So why, one might ask, up the loft on the 3-wood instead of the driver? The guess here is that Golf Club de Chapultepec, with its extremely narrow fairways and the penalty for missing them, will see Woods use 3-wood off the tee a fair amount. And when you’re giving up some distance off the tee, it stands to reason that you would try to get some of it back.

And judging from some reports, the distance boost is there. Golf writer Steve Dimeglio tweeted that Woods hit a 3-wood off the tee on the downhill par-5 11th hole during a practice round Tuesday that went 345 yards. Getting some of that yardage back, indeed.