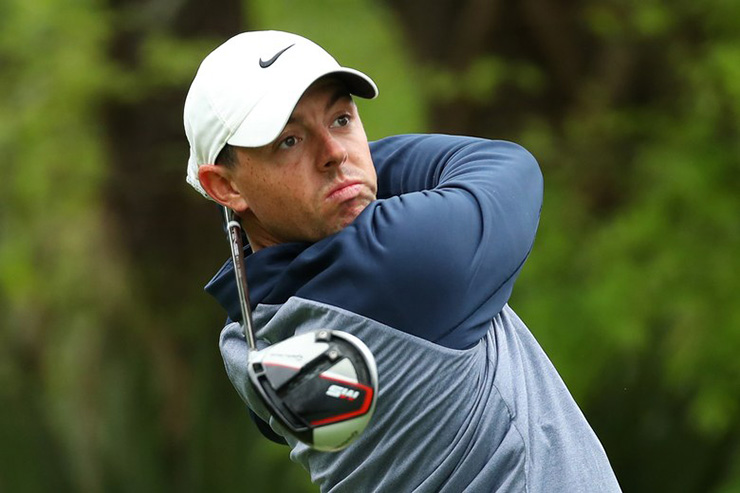 PONTE VEDRA BEACH, FLORIDA – MARCH 17: Rory McIlroy of Northern Ireland plays his shot from the fifth tee during the final round of The Players Championship on The Stadium Course at TPC Sawgrass on March 17, 2019, in Ponte Vedra Beach, Florida. (Photo by Gregory Shamus/Getty Images)

By E. Michael Johnson
Although a different month, Rory McIlroy’s win at the Players Championship marked a two-year anniversary of sorts. That’s because it was at the Players in 2017 that McIlroy announced that he had joined TaylorMade to play its clubs and ball and McIlroy had a bagful of the company’s equipment at TPC Sawgrass.

On a day where remarkable shots and magical putts were the norms, McIlroy sealed the victory with a pair of solid plays. The first was a 14-foot birdie putt on the par-4 15th after missing a five-footer for par on the previous hole. McIlroy then followed it up with a superb iron shot from 174 yards (after bombing his tee shot 347 yards) to within 19 feet on the par-5 16th, that led to another birdie and the outright lead. Then, when he needed a good drive, he ripped one in the middle of the fairway on No. 18.

McIlroy uses a 9-degree TaylorMade M5, a club featuring multiple technologies, including a face brought beyond the limit for spring-like effect and then injected with a resin to bring it back to legality. The driver also features the same Twist Face technology that was utilized on last year’s M3 model, where the face is curved more open on the high toe and more closed on the low heel area to help mitigate the effect of off-centre strikes. McIlroy also took advantage of the adjustable aspects of the club, setting the hosel is a slightly lower loft setting and positioning the movable weights in the rear of the centre track and in the heel of the track that runs along the perimeter (which produces a slight draw bias). When it’s working there are few better with the driver than McIlroy, who ranked third in strokes gained/off the tee and first in strokes gained/ tee to green for the week.

On the short end of the bag, McIlroy has used TaylorMade’s new spider X mallet since the Sentry Tournament of Champions, citing the alignment feature as a prime reason. “One of the things at the end of the year I was struggling with a little bit was just alignment,” said McIlroy in Hawaii. “With the Spider I feel like I aim it a little bit better. I messed around with it, it’s not as if it went in the bag yesterday.”

The new Players champ also played the 2019 version of TaylorMade’s TP5 ball with the number 22 on it. McIlroy told Golf Digest the meaning on the number back in 2017.

“The number has a dual meaning. I married Erica Stoll on April 22, but there was something else as well. We looked up the meaning of numbers and the number 22 means powerful and high risk, high reward, and that’s sort of everything I am on the golf course so I thought that was appropriate,” he said.

For this week, the reward was about as high as it gets.

What Rory McIlroy had in the bag at the Players Championship