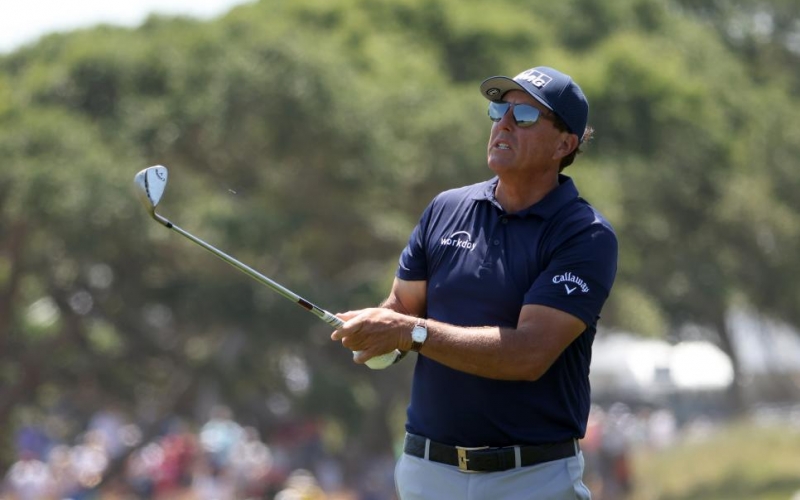 By E. Michael Johnson
Phil Mickelson won the 2021 PGA Championship at Kiawah Island’s Ocean Course by two strokes over Brooks Koepka and Louis Oosthuizen, and not only was the final round a bit of a roller coaster, but what was in his bag wasn’t entirely clear, either.

Photos appear to indicate it is likely the latter, as the TaylorMade club Lefty used the first three rounds was heavily blacked out while the markings on the one he used Sunday were readily identifiable. Photos also appear to show only two woods in the bag.

Of course, with Mickelson and his equipment, things are never boring and that extends beyond the question over which club he actually broke and which club he replaced it with. Mickelson came to the PGA armed with a new driver—a Callaway Epic Speed with 6 degrees of loft and a finished loft of 5.5 degrees. The driver has a Fujikura Ventus Black 6TX shaft, and according to Callaway PGA Tour rep Jacob Davidson, the Epic Speed head has a lower center of gravity that helps Mickelson keep the spin rate down when he hits his preferred cut off the tee. On a course where wind can be a big factor, keeping spin down is important on any shot with curve on it to help avoid the bend from beginning too much.

At the long end of his bag, Mickelson used a trio of Callaway X Forged UT utility irons for his 1-, 4- and 5-irons. The X Forged UT is a hollow-body construction, which gave Mickelson plenty of distance, especially with the 1-iron, while providing plenty of height when needed on longer shots into the firm greens. Callaway’s Apex MB rounded out his iron set, which Mickelson used to rank second in strokes gained/tee to green, picking up more than eight shots shots on the field and 12th in greens in regulation. All of Mickelson’s irons have KBS Tour V 125 S+ shafts and Golf Pride MCC grips.

The shot of the day, however, was when Mickelson holed out from a sandy area for birdie on the par-3 fifth hole using his 60-degree Callaway PM Grind wedge. Mickelson’s 52-degree wedge is bent to 50 degrees and the shaping on his 55- and 60-degree feature a slightly update version of the company’s C-grind sole configuration.

Given that Mickelson is one of the game’s best short-game players ever, it’s somewhat fitting a wedge helped propel him to his sixth major championship victory. And as for his bag, that’s one thing that is not in question.