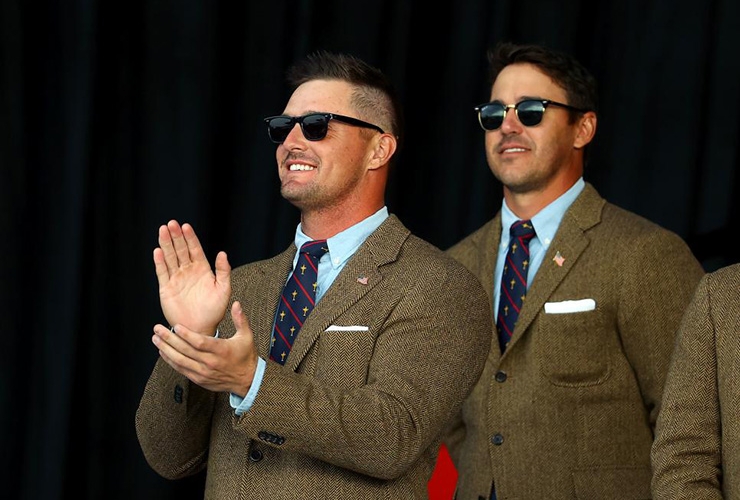 By Joel Beall
It is the matchup golf fans have desperately wanted, but it is not the match they were hoping to get.

For two years the sport waited for a battle between Brooks Koepka and Bryson DeChambeau. Two years of animosity and eye-rolls and trolling, of speculation and dissection and discourse. All of it drama in its own right while simultaneously fueling the promise of an even grander spectacle on the horizon. That tomorrow is now here, and the grand finale we were billed is not a fireworks display that will rival the Fourth of July but instead a knapsack of sparklers and Roman candles.

How else can you possibly describe Tuesday’s long-rumoured announcement that Koepka and DeChambeau will indeed face-off, but not against the backdrop of azaleas and pine or on yellowed-out runway with the claret jug ready to be filled with chocolate milk or Michelob Ultra … but next to a waterfall in the desert the day after Thanksgiving?

For those who missed it, Koepka and DeChambeau will combat in the latest iteration of “The Match.” Actually, “combat” is way too strong of a word for a made-for-TV contest. How does one describe professional wrestling? Tussle, scuffle, skirmish … staged. That’s the word.

Also lame. And kind of dumb, yes? Or maybe we’re the ones who feel dumb, putting so much energy and investment into what this feud said about them and us and the game and even society as a whole, only for its endgame to be an exhibition that historically shares a date with the Skins Game.

No, this was not a long con. There is genuine animus between the two, and that feeling likely remains. But the feud is over, at least in a meaningful fashion. Their feud matters in the same way two mayors making a bet during the Super Bowl matters, which is to say it doesn’t matter at all. Whatever happens in their relationship from here on out should not be taken seriously. They are cashing those chips in, transforming from gladiators to barnstormers.

We suppose congrats are in order to DeChambeau. This was a feud that had spun out of his control, that some described as crossing into bullying and led to a fan edict from the PGA Tour commissioner. Now it will lead to financial gain. Same goes for Koepka; the man will get a payday for basically making his deep-seated, unquenchable dislike public.

In theory, doing what they’re doing makes sense. The PGA Tour had no appetite for coupling Brooks and Bryson in a Thursday-Friday pairing, and the chances of a matchup happening organically on a major weekend were slim. It’s why a vocal contingent advocated for the two to be paired at the U.S. Open; that is a tournament that dabbles in chaos, after all.

The counter to this was a Thursday-Friday date at Torrey Pines would have doused the flames. There would have been intrigue regarding the prospect of an initial handshake, reporters would have noted a tense and unfriendly atmosphere, maybe the cameras catch a head shake and Brooks makes a snarky tweet afterward. More than likely, it would have gone off without controversy, cooling the bickering between the beefy men. Which is why, despite the odds, many wanted this showdown to naturally come to fruition.

But Thursdays and Fridays and even Saturdays have a short shelf-life; Sundays are forever. There were countless instances in this feud’s timeline that grabbed our attention and enriched the story. What held that attention was the idea these two would have to eventually settle it inside the ropes and settle it when it mattered.

Instead, they will meet when it matters the least.

Will people watch? In case you haven’t checked the channel guide lately, there are a heck of a lot of reality shows. They are entertaining and bewitching and speak to an inner craving that we’re ashamed of admitting, so much so that reality shows are often called guilty pleasures. Yes, people will watch, in a post-turkey fog, Brooks vs. Bryson go 12 rounds in Vegas.

Of course, the undeniable truth about reality shows is there’s not much “real” about them. They are the antithesis of sports. Sports are the greatest theatre of all because the audience never knows how it will end. Unfortunately for those captivated by this ridiculous, glorious feud, we know the ending. And knowing makes the rest of it feel empty.