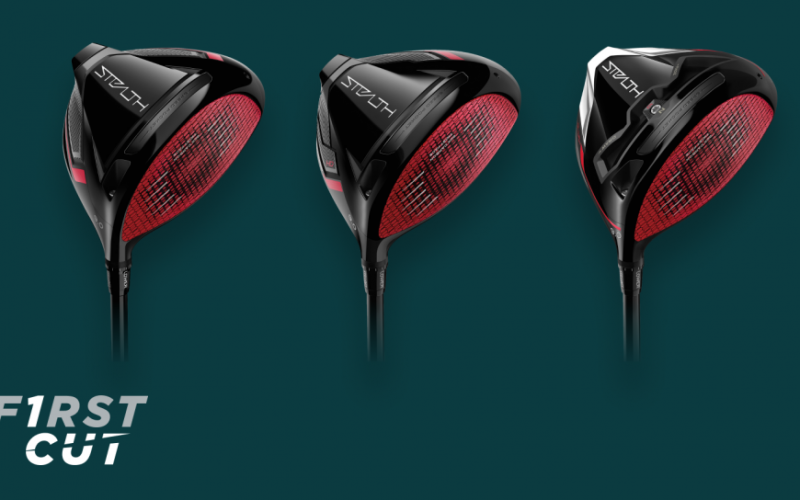 WHAT YOU NEED TO KNOW: A carbon-composite face—not the crown or even the body as we’ve seen in various stages over the last 15 years or so, but the part of the club that makes contact with the ball—is the foundation for TaylorMade’s three new Stealth drivers. The trio includes the adjustable weight Stealth Plus; the higher-launching, higher-forgiving Stealth; and the high-launching and draw-biased Stealth HD. The face, made of 60 layers of carbon-composite fiber, is 40 percent lighter than a similarly sized titanium face to create a more efficient energy transfer and better ball speed consistency across the face.

UAE Pricing and release dates to be confirmed) 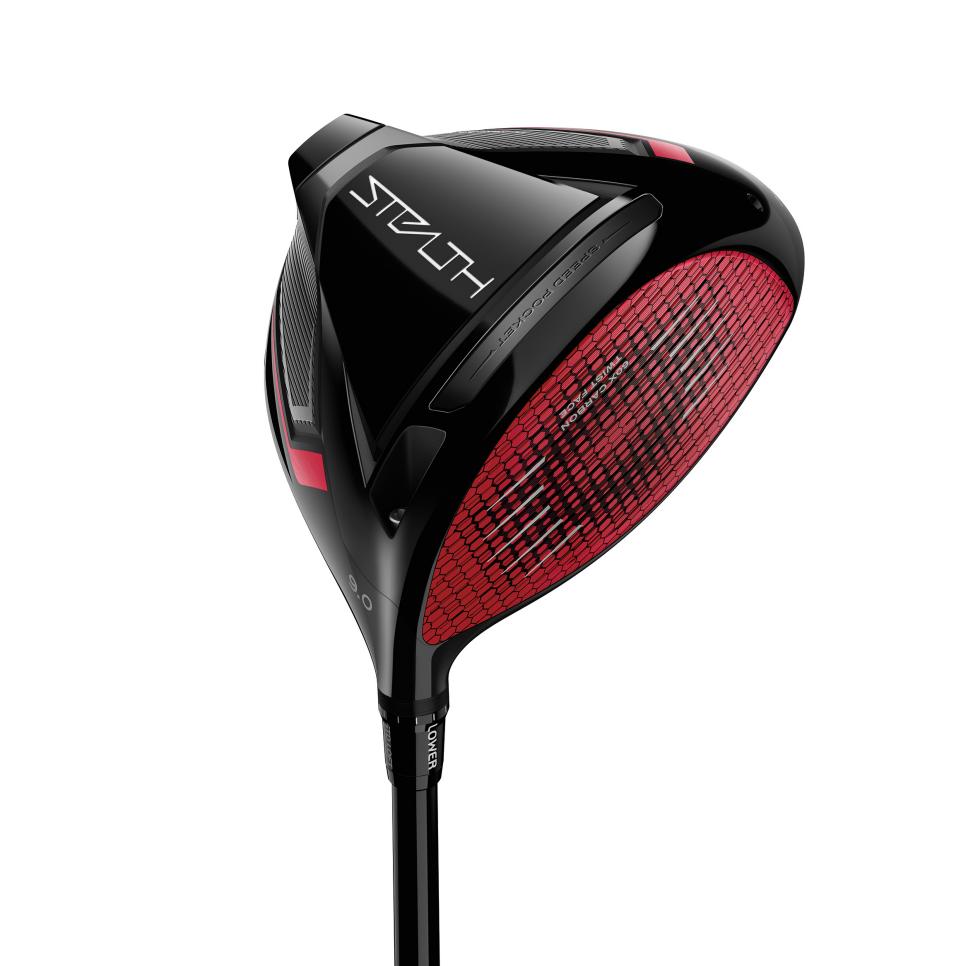 THE DEEP DIVE: The titanium face driver, the golf industry’s staple since the mid-1990s, has run its course. So says TaylorMade’s team of engineers who in fits and starts over the past 20 years have been pursuing something they say is not merely entirely different from titanium, but of course, fundamentally better. As Tomo Bystedt, TaylorMade’s senior director of product creation, puts it, referencing the famous “S Curve” for innovation, “We knew the S curve for Ti was ending and the S Curve for carbon-composite faces was beginning.”

These are, of course, both charted and uncharted waters. Other companies have made little inroads or even dramatically failed when they introduced composite-faced drivers. Yonex is one, and so, too, perhaps more infamously was Callaway with the Big Bertha C4 over 20 years ago. TaylorMade’s team has been studying the idea of carbon composite replacing titanium as a face material for the past two decades. The company kept pulling back from introducing the idea for a product because titanium, the super-strong, super light and super flexible metal alloy, really couldn’t be beaten. It’s worth remembering, of course, that titanium alloys were at the root of golf’s ruling bodies instituting rules limiting the way a driver’s face could flex. Originally, that was under the heading of “springlike effect” or “coefficient of restitution” (COR), but that performance attribute gave way to characteristic time (CT), a reference to how a portable test measured face flexing. 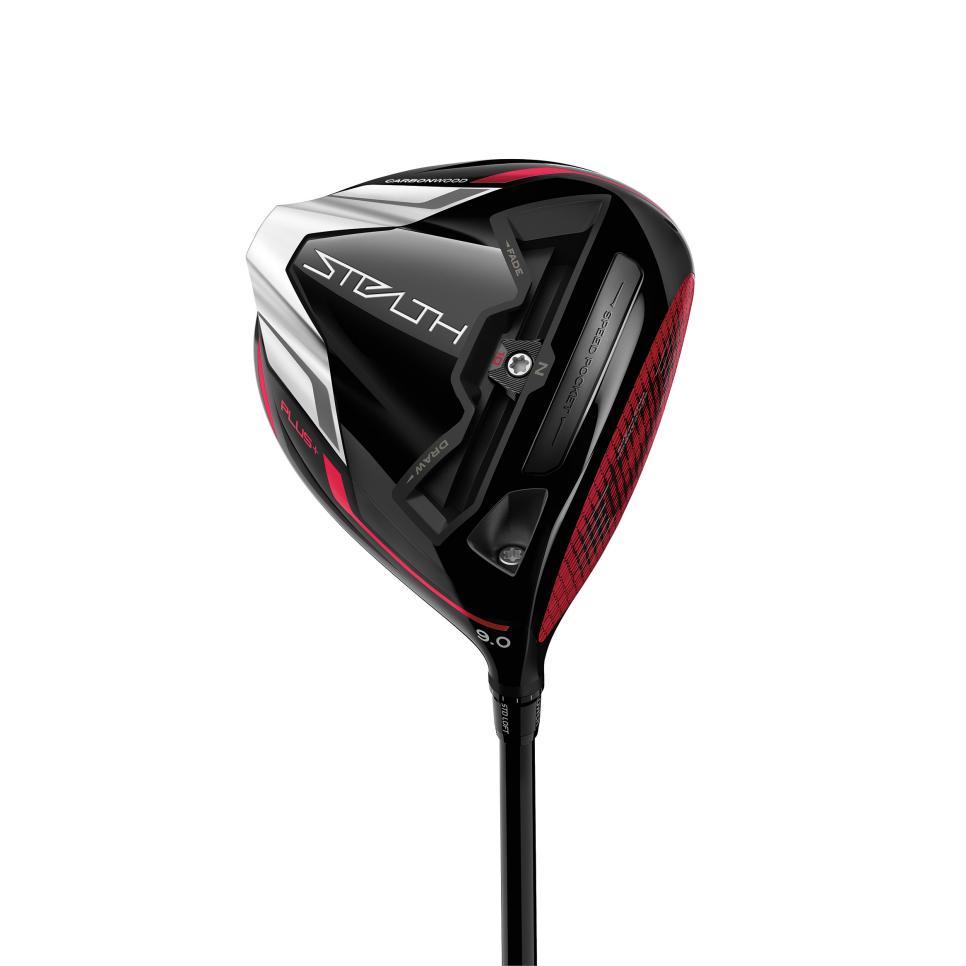 TaylorMade believes the Stealth drivers, which include the sliding movable weight Stealth Plus; the high-launching, high-stability Stealth; and the slice-fighting Stealth HD, perform better with respect to those springlike effect properties and guidelines because the carbon-composite face is significantly lighter than a titanium face. The faces on the Stealth drivers weigh 26 grams compared to 43 grams were they made of titanium. It’s a complex bit of engineering theory, but the idea is that the lighter the face, the more efficient the collision because when there’s less mass taken up by the face, there’s more mass in the body. The problem for titanium is it can’t really get significantly lighter anymore, said Matt Johnson, TaylorMade’s principal engineer in its advanced design division.

“You could get thinner and thinner with titanium but then it becomes nonconforming so the only way to overcome that is to go to a new material,” he said, noting the new Stealth faces also are 20 percent larger than TaylorMade’s recent SIM drivers. “It needs to be appropriately stiff but as light as possible.” That makes carbon-composite fibers the great untapped alternative. 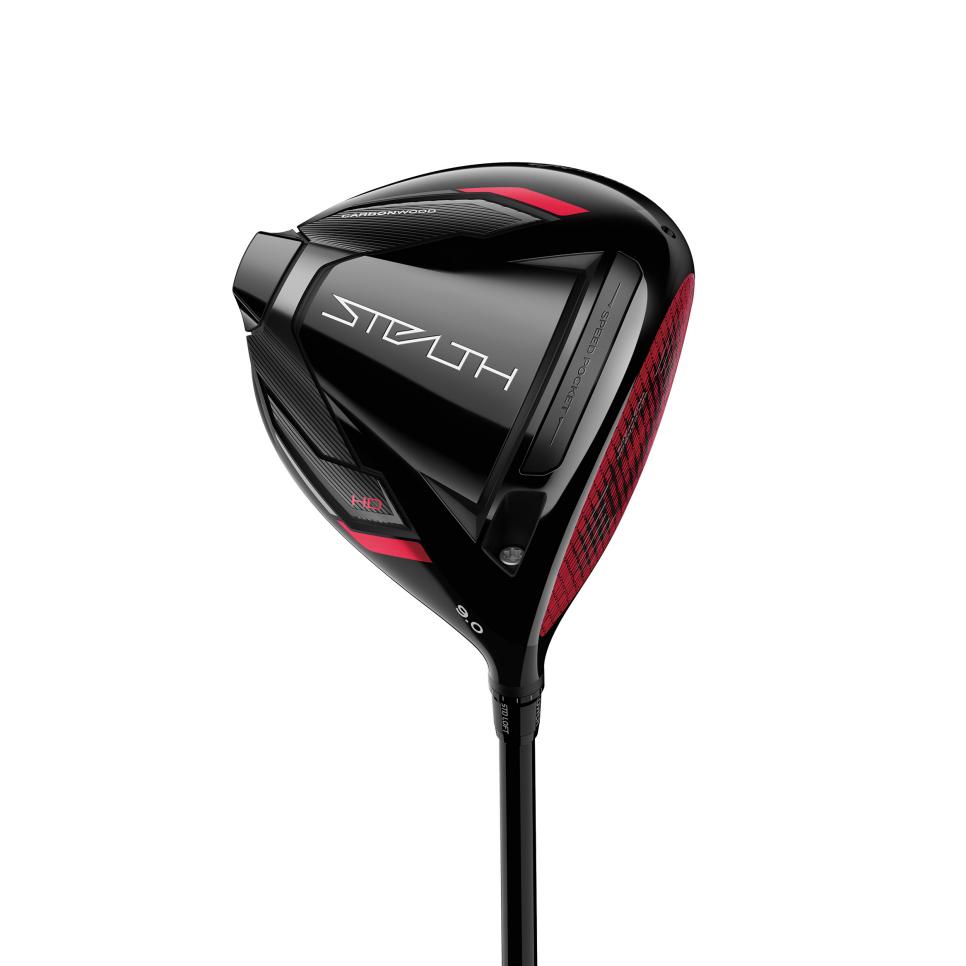 The result of the carbon-composite faced drivers, what TaylorMade is calling “Carbonwoods,” is what the company sees as an opportunity to create a higher springlike effect across a greater area of the face—something that was limited more by the properties of titanium than by the game’s specific equipment rules.

“The reason we’re doing this first and foremost is for speed,” Bystedt said. “Normally, we’ve talked about how when something is lighter we’re using that discretionary weight and moving it lower or moving it back. Well, this is not that story. We’re not going to say this is a weight savings for improving mass properties. Essentially we’re taking mass away from the face and putting it in the body of the club. So the part of the club that moves momentum into the ball is now heavier. So the momentum transfer is more efficient. That’s why this face delivers additional speed.”

In other words, it’s not exactly the case that the moment of inertia (stability on off-centre hits) for the Stealth drivers has improved dramatically because of the lighter face or that the centre of gravity is lower or farther back. Rather, the lighter construction means a higher speed across a wider area of the face, in part because the face is 20 percent larger compared to the SIM driver of 2020 and the largest on any TaylorMade driver since the Burner Superfast 2.0 from 2011. 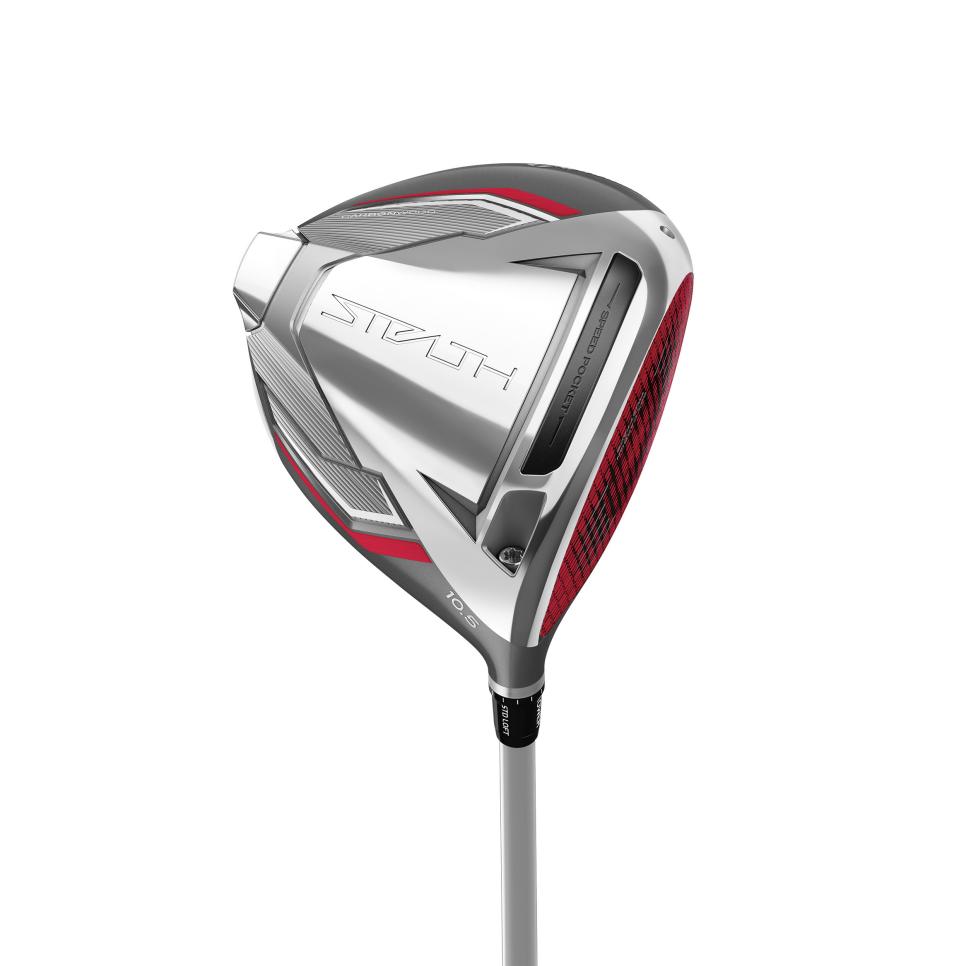 In addition, though, it’s not just that the face is lighter. The carbon composite design, which involves 60 layers arranged in different orientations, patterns and shapes, can target a higher range of high spring-like effect measurements than a typical variable thickness face design made of titanium. Why? Because the manufacturing tolerances of carbon composite are more precise. Also, the carbon construction allows for more consistently precise shaping of the company’s patented asymmetrical “Twist Face” curvature, where the face is more open in the high toe and more closed in the low heel than typical symmetrical bulge and roll curves. That means tighter dispersion on off-centre hits.

Of course, the problem with carbon-composite face designs is often durability. As TaylorMade’s Todd Beach, senior vice president of research and engineering, puts it, “Composites aren’t designed typically for direct impact. If you hit a tree with your graphite shaft it’s going to snap. So that was a big hurdle to get over.”

The key element in solving that problem was a thermoset polyurethane blend cap on the carbon-composite layers. Similar to the polymers used in golf ball covers (particularly in terms of hardness), the underside of the cap features the distinctive red-black face graphics. (TaylorMade will offer six color options as part of its MyStealth program, which also includes additional choices in finish, body colour, sole decal colour and headcover.) 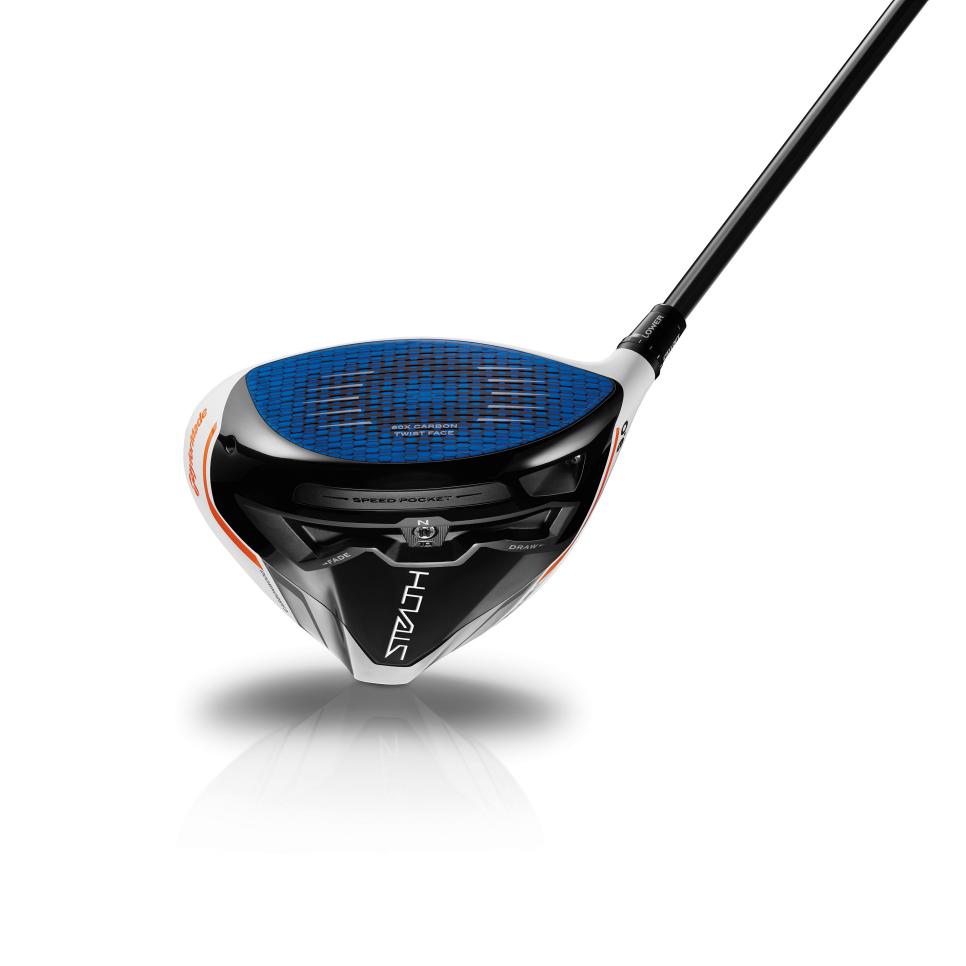 The protective polymer cap isn’t merely a durability play. There’s also a nanotexture roughness pattern between the grooves to create the ideal friction for the optimal spin and launch conditions to maximize distance. That sawtooth friction pattern between the grooves is only 18 microns high, or about one-fourth the width of a human hair. In TaylorMade’s 20-year R&D journey to bring a carbon-composite face to the market, the friction pattern and the development of the special 5-axis CNC machining of that pattern took two years all by itself, all while working on other driver designs.

The company introduced a carbon-composite faced driver in Asia in 2013, the Gloire Reserve, which sold about 8,000 units, a significantly smaller batch compared to the hundreds of thousands of heads that would be required for a global launch. At the time, Beach said, that the 30 percent larger face on the Gloire Reserve, which featured 70 layers of carbon composite, “gave birth to a new step in distance.” Eight years later, Beach sees Stealth as a global paradigm shift—and interestingly, a design they’ve discussed with the ruling bodies for some time. Even if the guidelines governing springlike effect were tightened, as has been indicated, Beach believes the precision of the carbon-composite face design and the tighter tolerances allows them to stay closer to the limit than traditional titanium faces. 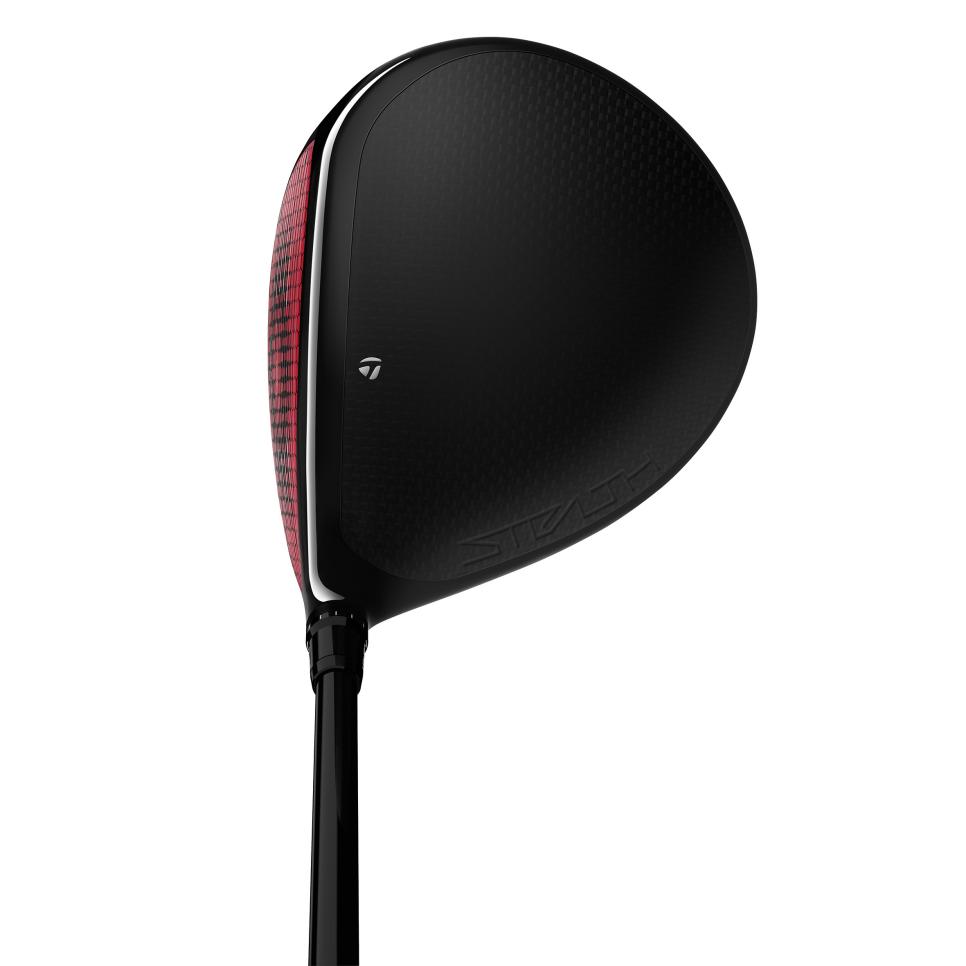 “As we were developing these ideas in carbon composites, Ti would catch up and then raise the bar and then Stealth would raise the bar and ti would catch up,” Beach said. “So we weren’t going to launch this until it could beat ti. But we finally made it over the mountain and we’re on a whole new S-curve now for innovation in composites. We’re now in this era where we’re basically saying more and more of this head is going to be made out of this material that’s better than ti.”

The three drivers in the lineup start with the Stealth Plus (8, 9, 10.5 degrees; $600), which brings back a sliding weight track in the forward part of the sole last seen in the SIM driver. The 10-gram weight can be set in a vast range of positions from heel to toe to accommodate ballfight preferences. There’s also the Stealth (9, 10.5, 12 degrees; $580), which eschews the movable weight feature to concentrate on redistributing mass for maximum forgiveness (about a 15 percent higher MOI compared to Stealth Plus). The draw-biased Stealth HD (9, 10.5, 12 degrees; $580) attacks slicers needs by shifting the back-weighted keel-like feature in the sole slightly toward the heel, which adds draw spin but maintains the high stability on off-centre hits, the highest in the Stealth family. The Stealth also will be offered in a higher-launching women’s spec (10.5, 12 degrees; $580). The custom MyStealth options will retail for $700.