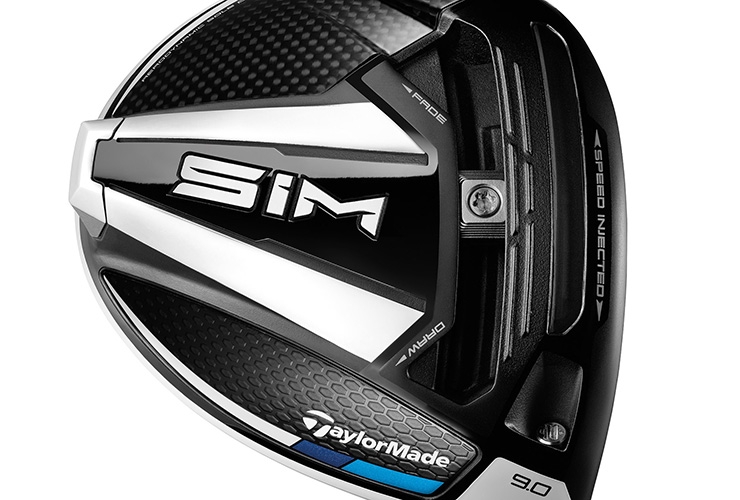 By Mike Stachura
The new TaylorMade SIM family of metalwoods reflect a distinct departure in shape for a distinct purpose, but before you think this change reflects a sudden shift in philosophy that came to be over the last year, consider this: This pursuit is the culmination of work that dates back more than a decade. 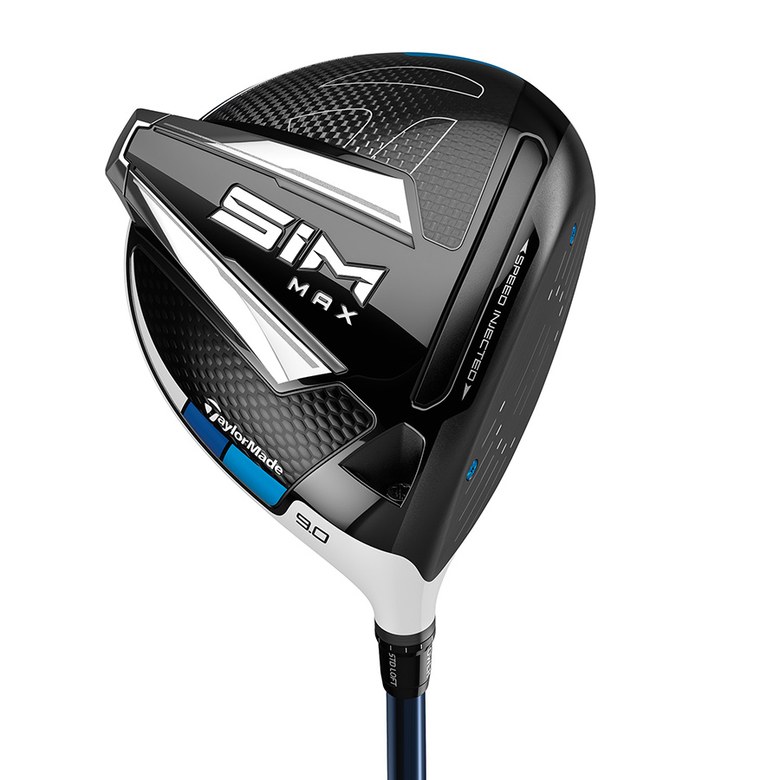 But that’s what’s required if you’re trying to do something that changes the paradigm of what’s possible. The shining example is the company’s SIM, SIM Max and SIM Max D drivers, although it’s also reflected in the new SIM and SIM Max fairway woods and hybrids. What the new SIM family of driver designs reflect is a marriage between two fundamental ideas that seem to have been inextricably in conflict with each other: The more a driver shape in the past focused on aerodynamics and how much faster the clubhead travels through the swing, the more that shape wasn’t ideal for a low and deep centre of gravity for improved forgiveness. Conversely, the more a shape focused on forgiveness, the less aerodynamic it was.

But the SIM (“shape in motion”) drivers reflect a pursuit of both enhanced aerodynamics with enhanced forgiveness and a low centre of gravity. The result is a family of sleek shapes with an angled and weighted keel feature in the sole, what the company is calling the “inertia generator.” The combination is how the SIM drivers mix those important performance attributes of forgiveness, high launch and low spin with enhanced clubhead speed.

The key component in the development of the SIM drivers is the wind tunnel testing TaylorMade’s engineers have been doing at the San Diego Low-Speed Wind Tunnel dating back to 2008. The latest design reflects a shape change that pushes weight deep and low in an aerodynamic frame that also features a raised crown and skirt areas. Those latter elements push the CG in the wrong direction (up), but the weighted keel moves it back to where it adds clubhead stability on off-centre hits with the low spin of a lower CG. It’s a design TaylorMade’s team always thought was possible but took years of work, testing, new materials and manufacturing sophistication to make it real, said Todd Beach, TaylorMade’s senior vice president of research, design and engineering. 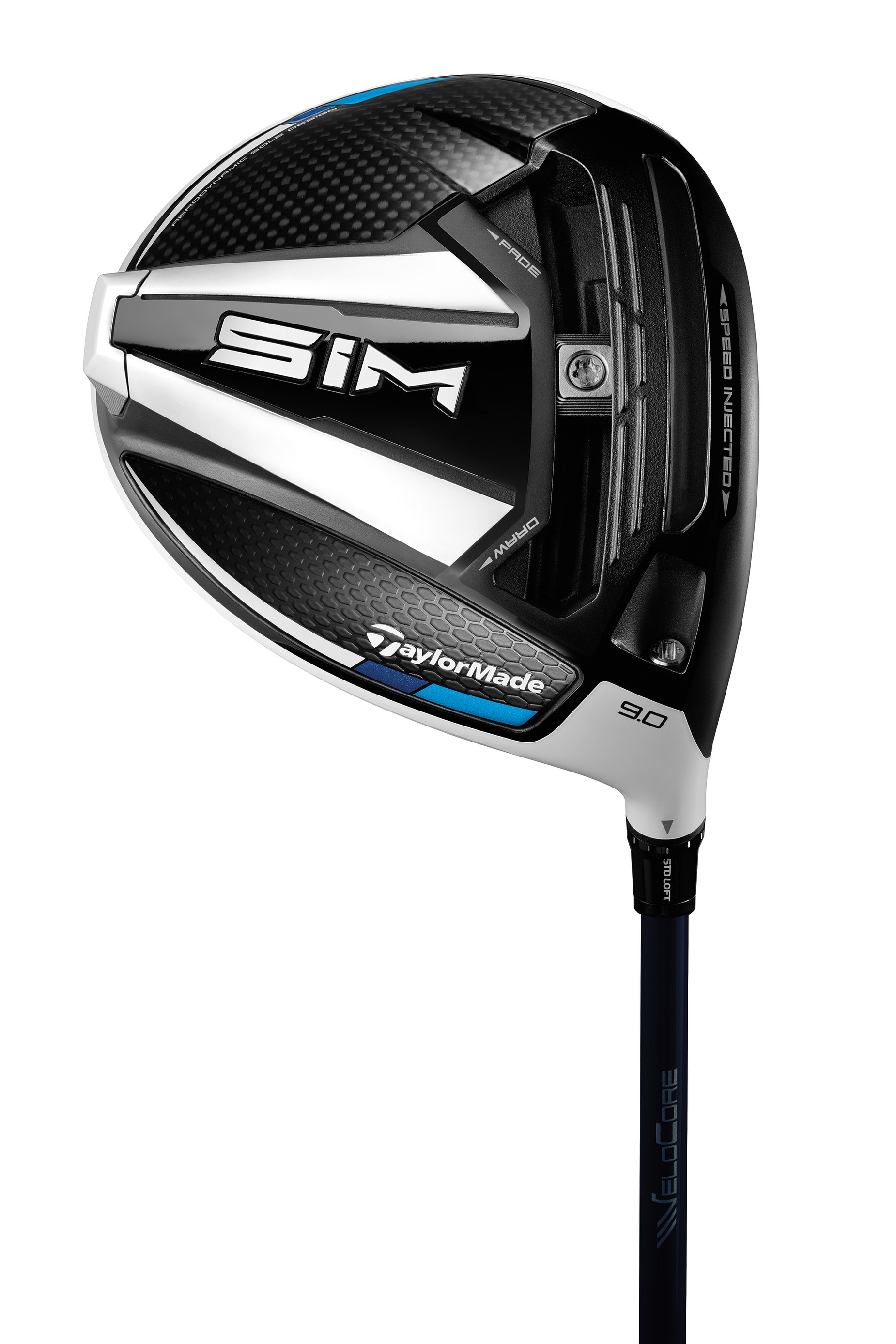 “We had machined prototypes back in the day that got us close to this, but they weren’t what we wanted and you just didn’t have enough mass to move around,” he said. “Ideally, you don’t want to have to compromise. 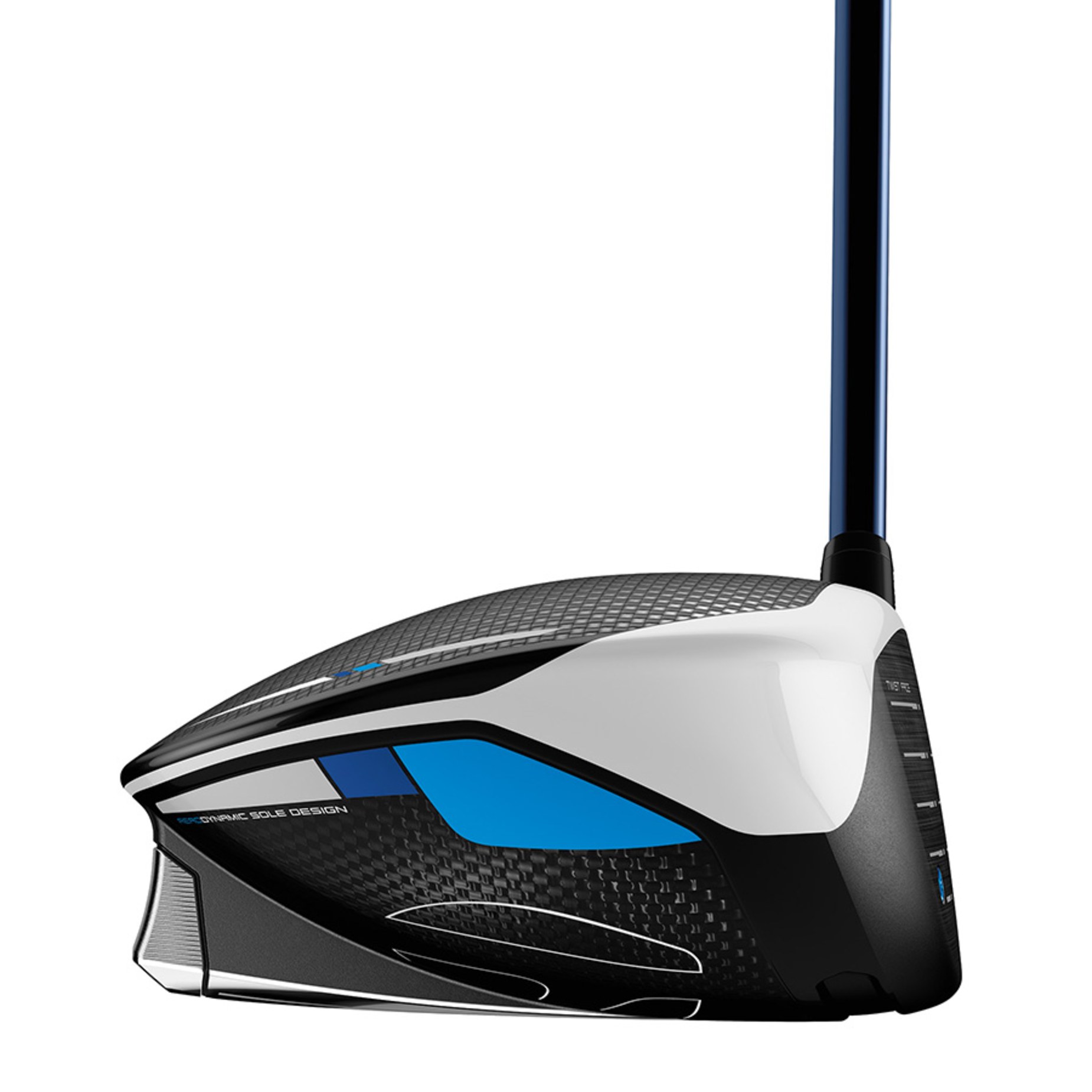 That push toward increased forgiveness, better aerodynamics and better ball speed across a larger area of the face is possible because of the multiple materials and manufacturing processers used in the designs. Chief among them is the lightweight carbon composite crown and sole pieces, the use of a heavier steel weight in the angled keel and an updated version of the company’s process of injecting a resin behind the face of each driver to push the USGA limits of spring-like effect that was introduced last year with the M5 and M6 drivers. 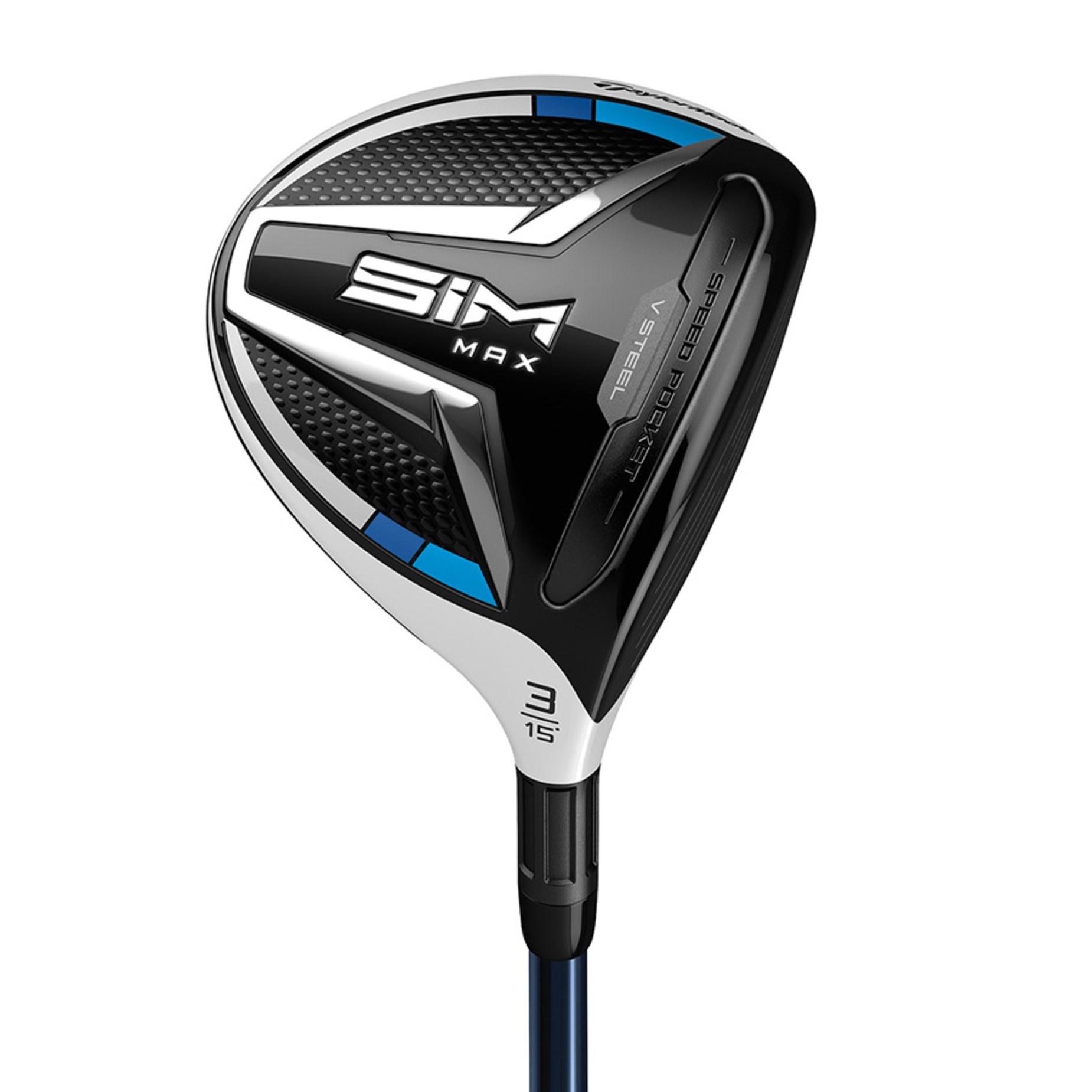 But it’s the unique sole shape that stands out. The keel shape extends weight farther back for improved off-centre hit stability, but TaylorMade’s wind tunnel testing revealed that the feature worked against the rest of the driver’s aerodynamic improvements when it was set in a straight line back from the centre of the face. That interrupted the airflow over the sole, increasing drag and slowing the club’s potential speed. Instead, the feature was angled slightly from heel to toe to match the way a clubhead is travelling on the bottom part of the downswing, just when it’s approaching maximum acceleration.

“We need the club to be really slippery through the air during that section of the swing because that’s where the v-squared really kicks in,” Beach said, a reference to the formulas for acceleration and kinetic energy that include the velocity value being squared.

This combining of forgiveness and aerodynamics stretches across the three SIM driver models. The SIM version includes a 10-gram movable weight track to dial in degrees of draw or fade preference. The larger faced SIM Max is built for more forgiveness while the lighter SIM Max D is higher-launching with a built-in draw bias. All three models include a deeper, cut-through slot in the sole to improve how the face flexes, particularly on low shots. According to the company, the new variable thickness face structure, the latest iteration of the company’s inverted cone shape, now has expanded the area that produces a spring-like effect near the USGA limit from the size of less than a dime to that of a quarter.

Shape changes based on history and the use of new materials drives the changes to TaylorMade’s SIM and SIM Max fairway woods and hybrids, too. All of the models feature sole structure reminiscent of the V-Steel fairway woods from the early 2000s, which featured a centre section flanked by heel and toe sections that rise off the ground to provide cleaner turf interaction on both tight and uneven lies.

The SIM fairway wood employs a new titanium alloy in the face called ZATECH that the company says is exclusive to TaylorMade and is made to be 20 percent stronger than the titanium typically used in a driver. The lightweight titanium body is supported by a steel sole that weighs 80 grams to provide a low centre of gravity for low spin to go along with that increased speed potential from the new face.

The SIM Max fairway woods offer a slightly larger profile (about three percent more volume than SIM at 185 cubic centimetres) and is designed for higher launch across a range of lofts that stretches to a 9-wood. The SIM Max D offers a lighter shaft, a 190-cubic centimetre size and draw bias. Both use a high-strength C300 steel alloy in the face and a slot in the sole to improve face deflection for added ball speed.

The SIM Max Rescue hybrids incorporate a specialized version of the V-Steel sole shape, as well as the C300 steel in the face and the sole slot. Like the fairways, the slot is covered with a flexible insert that sits more flush with the sole to further aid turf interaction. 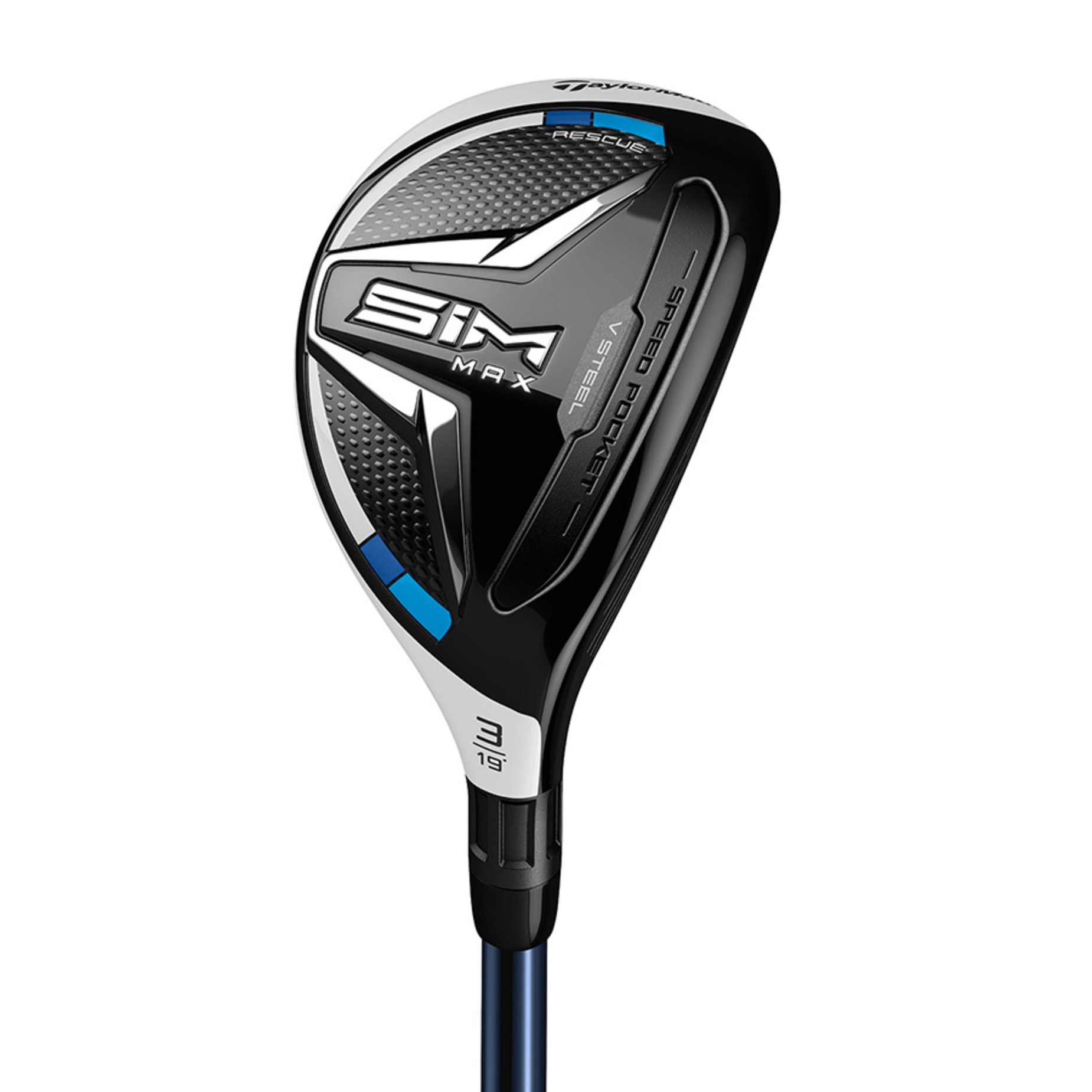 Like all the TaylorMade metalwoods the faces continue to feature the asymmetrical bulge and roll curvature known as TwistFace, which was introduced in 2018 with the M3 and M4 drivers. This shaping is designed to better return heel and toe mis-hits toward the center line based on the tendency of players to leave the face more closed on high toe hits and more open on low heel hits.