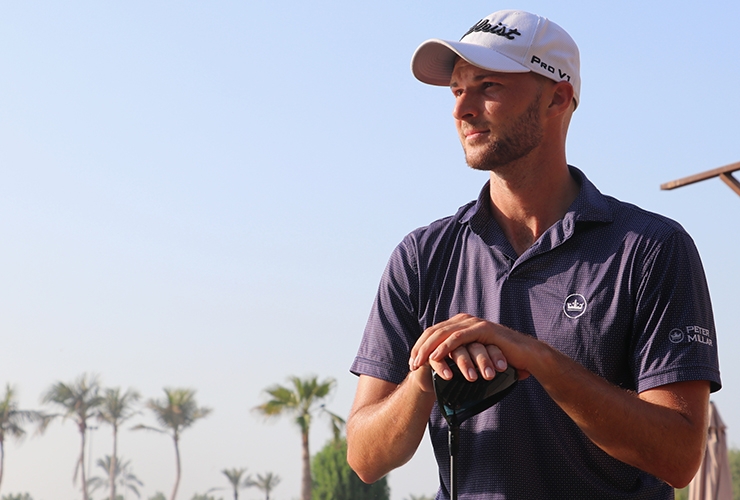 By Kent Gray
Another event, another sparkling MENA Tour by Arena bow.

This time it was out of work European Challenge Tour player Marco Iten making waves, two back-nine eagles helping the Swiss pro come home in just 30 strokes in an opening round of eight-under 64 at Tower Links Golf Club.

The 29-year-old from Zurich, playing on a special exemption in an effort to gain some match sharpness ahead of the second stage of European Tour Qualifying School next week, leads the Ras Al Khaimah Open by Arena by a shot from Swede Niclas Weiland, Scot Scott Henry and Englishman Joshua Grenville-Wood.

Grenville-Wood continued a day of spectacular shot-making in the northern emirate, holing out from 139 yards on the par-4 15th for an eagle in his 65.

Daniel Gaunt, starting the final regular-season stop second behind MG Keyser in the season-long Journey To Jordan race, made an early move, opening with a five-under-par 67, three shots better than the South African leader who was T-19 overnight.

Josh Hill, who created worldwide headlines last week by becoming the youngest winner of an Official World Golf Ranking event, struggled on the greens and came home in 78 after missing more than half a dozen par putts from inside six-eight feet range. The leading amateur after a opening 69 was Hill’s playing partner and “Penultimate 4” leader Robin Tiger Williams who has made a handy start after his record romp at the Journey to Jordan #2 Championship late last month.

Iten started in bright fashion, hitting it to six feet on the first two par-4 holes. Another gain on the par-5 5th was erased by his only bogey of the day on the eighth and he made the turn at two-under.

On the back nine, Iten eagled the 13th hole when he smashed a three-wood downwind from 290 yards to 20 feet and on the 18th, where he converted a 15-footer. He also had birdies on the 10th and 15th.

“It was a good day. I got off to a fast start and managed to carry that momentum on to the back nine. I was able to hit both the par-5s in two and make my putts,” said Iten, who lost his card on the European Challenge Tour this year.

“It definitely is a great confidence booster ahead of the second stage of the Q School next week. I can do with a few tournament rounds ahead of that and was looking for a place to play and some of my friends told me how good the MENA Tour is. I am thankful for the opportunity and hopefully, we can take the momentum from this round to the next two days.”

After enjoying a superb start of 8-under par 64 and leading the RAK Open by Arena, Switzerland’s Marco Iten says it is a great confidence boost ahead of the 2nd stage of European Tour Q School, and that we can see more of him in 2020 season. pic.twitter.com/JIMNoxmI99

Switzerland’s Marco Iten showed no effects of coming from the cold climate of Zurich to the heat of Ras Al Khaimah!
Two eagles on the back nine helped him climb to the top of the leaderboard at 8-under par 64 on day one of the RAK Open by Arena. pic.twitter.com/EIeg1avktN

Henry was bogey-free in his 65, while Weiland made one bogey.

“It’s always easier when a guy in the group is making all the putts like Niclas did. We both played well and I think we fed off each other quite nicely,” said the affable Scotsman.

LEADING SCORES (after Round One of Ras Al Khaimah Open by Arena):

Playing in the second group out this morning in Round 1 of the RAK open by Arena, @NiclasWeiland and @ScottHenryGolf fed off each other and posted the marker at seven-under par 65. pic.twitter.com/mfqSN6NpJP