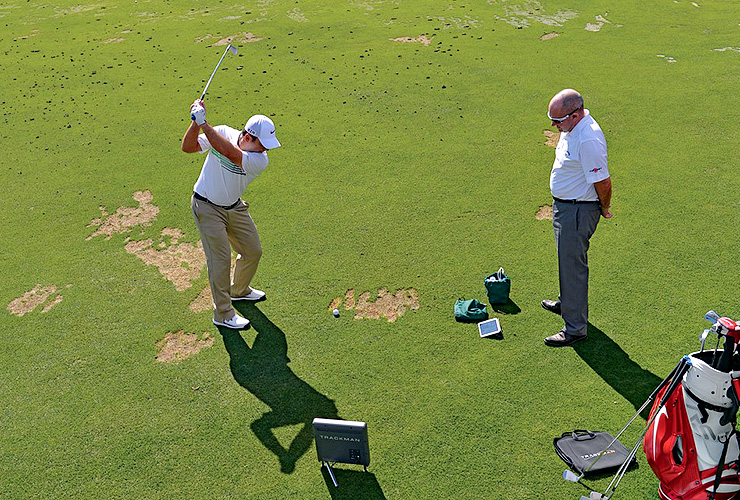 GolfTEC tested 30,000 players to find out what makes a great swing great The handicap system does a simple, elegant job of identifying a player’s ability. A 20-handicapper, a single-digit golfer, a club champion and a tour player all have different skill levels that lead to different scores. But what is it about a player’s swing that produces those various scores? There have always been plenty of theories, but we at GolfTEC have used cutting-edge measuring tools to quantify the swings of 30,000 golfers of all abilities. The result is the SwingTRU Motion Study, and its findings allow us to pinpoint those elements of good players’ swings that are the biggest separators from average or developing players. With the differences uncovered by SwingTRU, we can essentially build a “good player” composite. Here we’ll look at six elements of the backswing and downswing and compare the data collected from high-handicappers (players shooting over 100) to that of professional golfers. The closer you can get to the pro numbers, the better results you’ll see. It’s Big Data producing smaller scores with facts, not opinions. – With Matthew Rudy

HIP SWAY AT THE TOP

The term “sway” is one of those general-purpose instruction words every golfer has heard, but it can be confusing. Are we talking about the hips? The upper body? Let’s simplify it: The best players shift pressure over the back foot but without swaying the whole body off the ball. Less-skilled players exaggerate that pressure shift with a big body movement away from the target. To do it right, feel like you’re moving your tailbone closer to the target than it was at address (below, left), but without letting your head shift toward the target or over your back foot. The SwingTRU study shows pros’ hips on average move 3.9 inches toward the target on the backswing, and high-handicappers’ hips move 2.55 inches. But it looks like the high-handicapper is shifting away from the target here (below, right)—so what gives? We measure hip movement using the tailbone as the reference point, and anytime you turn your hips, your tailbone will move closer to the target. The key is, it should move several inches closer, not two. 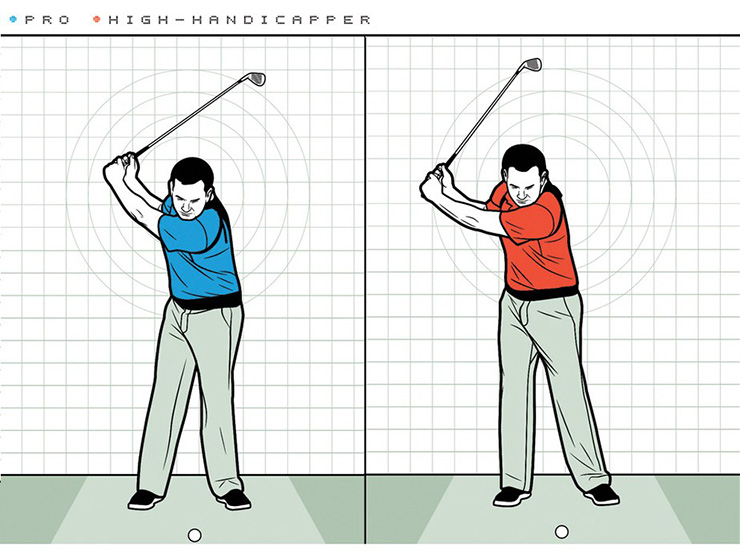 Hip sway: Pros shift the hips toward the target more than high-handicappers do (above).

SHOULDER TILT AT THE TOP

When it comes to amateur players trying to hit the ball longer, the advice that steals most of the attention is “Get more turn.” But all turn is not created equal. If you focus only on turning the shoulders and not how they turn, you’re missing one of the key elements that separates you from the players on tour. For many golfers, the tendency is to turn the shoulders relatively level, as if you were turning to look behind you to talk to someone (below, right). But tour players tilt their shoulders in addition to turning them. SwingTRU recorded the pros at 36 degrees of downward shoulder tilt at the top of the backswing and high-handicappers at 29.6 degrees. What does that mean for you? Feel like your front shoulder moves directly toward the ground on your backswing (below, left). At first, this might seem like you’re only tilting, but trust me, you’ll be turning, too. 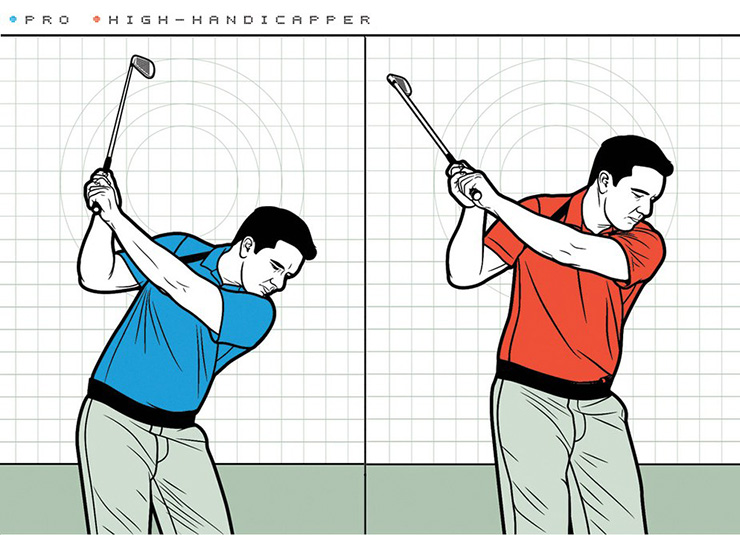 Many of the swing mistakes amateurs make—like cutting across the ball and hitting a slice—happen because the upper body gets too active or active at the wrong time. Improving how you use your arms and chest is useful, but changing how you use your lower body also clears up some of those upper-body problems. Hip turn at impact is a prime example. Beginners tend to stall the hip rotation on the downswing and try to control the swing with their hands and arms (below, right). Tour players have their hips turned toward the target at impact almost twice as much (below, left).

The arms and club come through at the end of the chain reaction, not the beginning. In SwingTRU, the pros average 36 degrees open with the hips at impact; high-handicappers average 19.5 degrees open. Try these feels to increase hip turn: Get your belt buckle facing more toward the target than the ball at impact, and both knees pointed at the target a split second later. Does this sound familiar? On the downswing, you try to quiet your body to get more ball-striking consistency—and to avoid sliding through it, which you’ve heard is bad. Unfortunately, the byproduct of that is an insufficient pressure shift to your front leg on the way down. As a result, you aren’t getting the most you can out of your swing. The best players at impact have shifted their hips ahead of where they were at address (below, left), but less-experienced players move farther behind the ball (below, right). SwingTRU data says the pros shift the hips on average 1.6 inches toward the target compared to the setup, and high-handicappers shift them .4 inches away from the target. For many students, thinking about what the hips do is too abstract. Instead, feel your front knee move toward the target on the downswing so that it’s over the outside of your front foot. If you’re used to hanging back, this will feel like a dramatic change. Get ready for some speed. 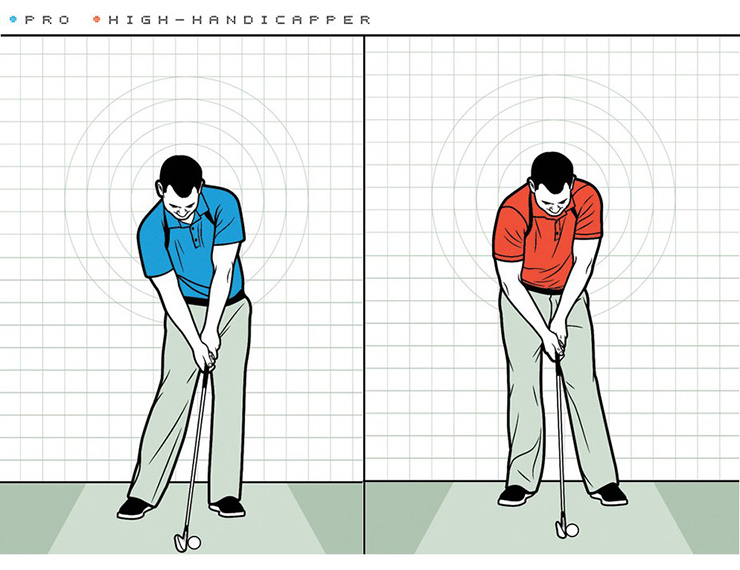 We’ve said the shoulders need to tilt downward at the top of the swing, and that concept should carry through to impact—except now the tilt is upward. Making an arms-dominated swing, which so many amateurs do, tends to produce relatively level shoulders at impact (below, right). Better players have the back shoulder significantly lower than the front shoulder at impact (below, left). The biggest jump in our SwingTRU measurements came between the best amateurs (0 to 5 handicaps) and the pros. That tells us that shoulder tilt is one of the hallmarks of the elite player. The pros in the study averaged 39 degrees of upward tilt at impact; high-handicappers 27.5 degrees. To achieve it, your belt buckle should be over your front foot at impact, with your head still over the middle of your stance. Imagine a friend was holding an alignment stick against your ear closest to the target—your head would be moving away from that stick at impact. 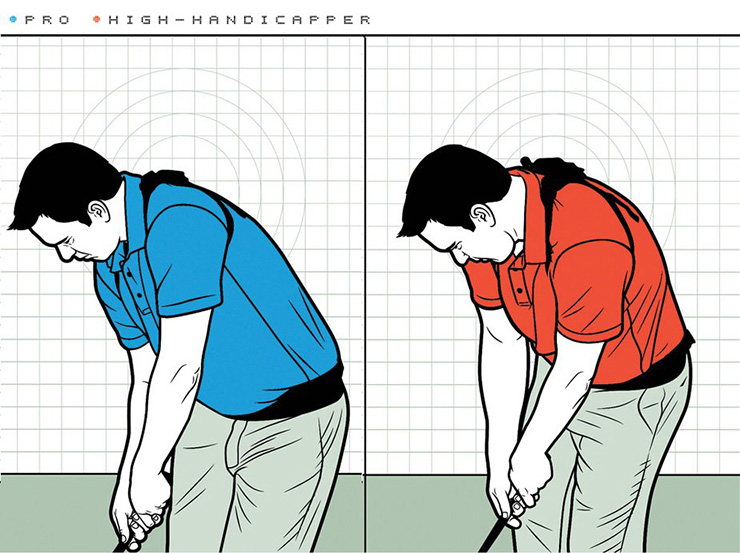 Shoulder bend: pros finish with the torso stretched back; high-handicappers stay bent over.

SHOULDER BEND IN THE FOLLOW-THROUGH

The difference between shoulder tilt and shoulder bend is direction: Tilt is the movement of each shoulder up or down in relation to the ground, like a teeter-totter, and bend is the amount your upper body is stretched back, away from the target. The easiest way to think about it is how proud you look in your finish position. Good players get very tall through the chest in the follow-through (below, left), with the spine extended and the neck bending a few degrees away from the target. The typical issue amateurs have is staying bent over through impact (below, right). When you do that, you aren’t getting the full benefit of the levers in your body or between your body and the club. Longer, taller levers produce more speed. In SwingTRU, the pros average 32 degrees of back bend, and the high-handicappers average 3.2 degrees. How can you get better? As you swing to your finish, try to feel like Superman or Wonder Woman, with an expanded, bulletproof torso and your front leg fully extended as if you just pushed off the ground to jump. 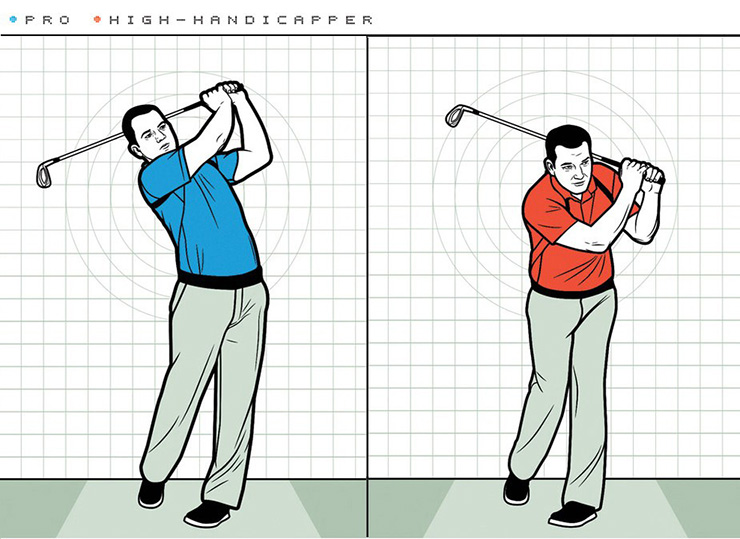 Good players look tall and proud at the finish, like Superman or Wonder Woman.

Nick Clearwater, a Golf Digest Best Young Teacher, is vice president of instruction for GolfTEC, based in Englewood, Colo.