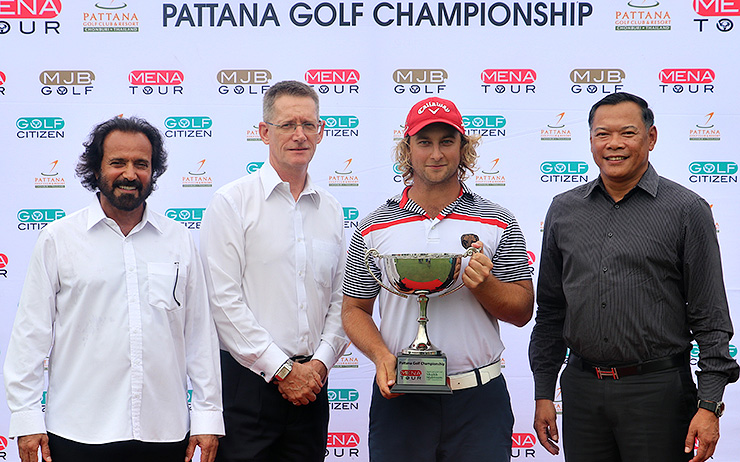 Fredrik From has set his crosshairs on the MENA Tour’s order of merit title after his breakthrough victory in the rain-truncated Pattana Golf Championship.

The 27-year-old Swede fired a nine-under 63 in the final round in Thailand to finish -13 for the tournament which was reduced to 36 holes after the first two rounds of the tour’s very first 72-hole event were washed out.

Seven of From’s nine birdies came on the back nine at Pattana Golf Club & Resort as he won by three strokes from Venezuela’s Wolmer Murillo.

“Feel really delighted to get the job done this time around after having lost out in a couple of playoffs on the MENA Tour,” said From after receiving the winner’s trophy from Thomas Topken, managing director of Pattana Golf Club.

“Everything worked well for me. I hit all the greens in regulation which was great. This course is my favourite now. There are so many scoring opportunities out there, especially on the back nine.

The MENA Tour now breaks till early June and the three South African swing events co-sanctioned by the Big Easy Tour, the developmental arm of the Sunshine Tour. From will be there as he chases starts in as many as four European Tour events (including the Omega Dubai Desert Classic) and the PGA Tour’s 2018 DEAN & DELUCA Invitational which are awarded to the MENA Tour OOM champion.

“I will be playing in MENA Tour’s events in South Africa and see if I can win the order of merit,” said From who graduated from the MENA Tour’s Qualifying School in 2016.

Murillo reeled off seven birdies against a lone bogey in his closing six-under 66 in Chon Buri to finish solo second, one clear of England’s Jordan Garnish and American Roberto Galletti, who fired two eagles, including one on par-4 6th en-route to his final round 67.

Overnight leader Jose Ignacio Marin Casado of Spain slipped into a three-way tie for fifth on eight-under after carding a level-par 72 alongside the Thai duo of Nakul Vichitryuthasastr and Wanich Petcharit.

Brazil’s Dubai-based Tiago Lobo kept up his dominance in the amateur division, taking the honours on two-under after a final round 73 as India’s Arkesh Bhatia, who is also based in Dubai, and Thailand’s Worathon Zeng shared second four shots adrift.

Elsewhere, playing in his first competitive event in four weeks, European Tour regular Prom Meesawat knocked the rust off his game, finishing tied 9th on six-under after returning a 68, one ahead of England’s Lee Corfield and three off Zane Scotland, a 10-time winner on the tour, as UAE’s Ahmed Al Musharrek settled for tied 60th on four over 148.