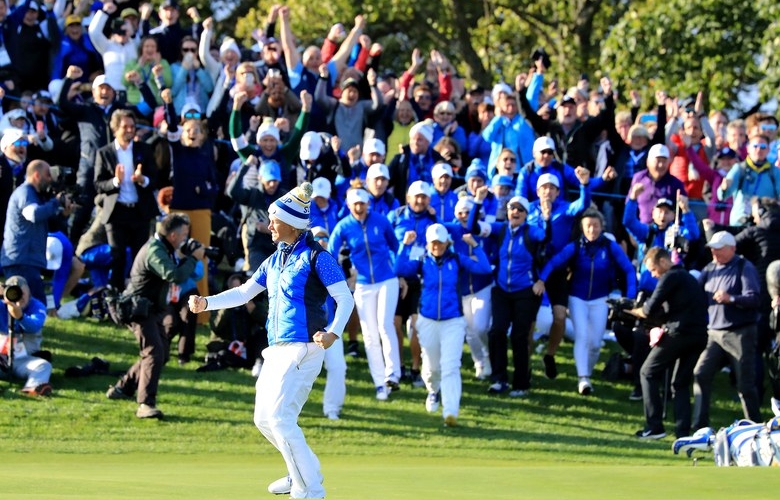 Pettersen of Team Europe celebrates her winning putt on the eighteenth hole in her match with Marina Alex of Team USA during the final day singles matches of the Solheim Cup at Gleneagles on September 15, 2019, in Auchterarder, Scotland. (Photo by David Cannon/Getty Images)

By Keely Levins
GLENEAGLES, Scotland — Suzann Pettersen and Marina Alex arrived at the 18th green, their match tied. Alex had 10 feet for birdie, Pettersen eight feet. Alex’s putt from above the hole missed, and in the time between her putt and Pettersen reading hers, Europe’s Bronte Law closed out her match against Ally McDonald on the 17th green.

Suddenly, the Solheim Cup was tied, too, and Pettersen’s putt meant the difference between Europe winning and the matches finishing in a 14-14 tie, allowing the U.S. to retain the Cup. All this was unbeknown to Pettersen, who when she holed her birdie putt did not realize it was for the win.

That all became obvious pretty quickly, when her whole team charged her on the green.

“I thought Bronte was behind me in the fairway, but she’s so good, she closes it out on 17,” Pettersen said. “And I actually didn’t know that it was the putt. But I knew I was just—I knew it was so close because Beany [European captain Catriona Matthew] came up on the 18th tee, and I’m, like, ‘OK, I understand. You don’t have to say much.’ “

Law was stuck on the 17th green, watching Pettersen putt via the large television screen by the green. Law heard the roars and started celebrating before the putt came up on the screen.