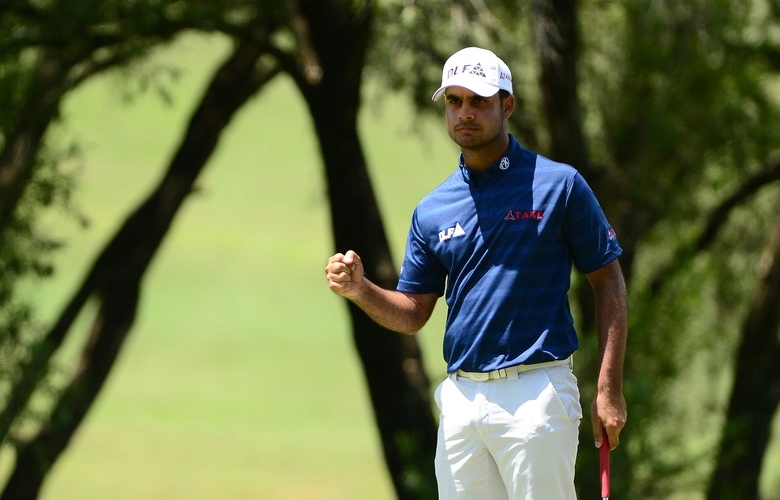 By Kent Gray
Red-hot Shubhankar Sharma will make an early start to his bid for a third European Tour title in just five starts when the new $1.75 million NBO Oman Open begins Thursday.

The 21-year-old Indian is the surprise early leader of the season-long Race to Dubai after winning the Joburg Open and Maybank Championship in the past two months to scoot up to No.71 in the Official World Golf Rankings.

Sharma will peg it up with 2016 Ryder Cupper Andy Sullivan and Frenchman Alexander Levy at 7.15am in the marquee morning three-ball as Al Mouj Golf graduates to full European Tour status after a five year Challenge Tour apprenticeship. He’s clearly expecting a challenging week.

“I’m surprised this is the first time Al Mouj Golf has hosted a European Tour event as it’s such a great course,” he said. “It’s a tough, long course that can get windy; I definitely think that it’s a championship course. Now they have the event here I’m sure it will continue for many years to come.

“It would mean a lot to win an event in the Middle East especially at such a great course as Al Mouj Golf. I’m playing well at the moment so hopefully I can have four good rounds and we will see what happens. Every win is special to me so hopefully I can keep going and pushing my career on.”

Levy, whose ace during last month’s Omega Dubai Desert Classic earned the European Tour shot of the month award, has his eyes on a 2018 Ryder Cup spot and will tee off the 10th, 10 minutes before European captain Thomas Bjorn who is grouped with Soren Kjeldsen and Thomas Detry.

Fan favourite Andrew “Beef” Johnston will look to rebound from an unwanted weekend off at last week’s World Super 6 Perth when he heads off at 11.55am with former Ryder Cupper Robert Karlsson and Joost Luiten.

There will be great local interest in the performance of Omani amateur Azaan Al Rumhy (8.15am, 10th tee) and Bahrain’s Nasser Yaqoob (1.15pm, 10th tee) who qualified via the Oman amateur qualifier.

With just Sharma and Jorge Campillo in the current Race to Dubai top-10 and Levy, at No.62, the highest placed entry in the OWGR, the new Desert Swing event is wide open.

One of the stars could be Al Mouj Golf itself. The Greg Norman design, ranked third in our latest Top 10 Courses of the Middle East ranking, is in sparkling condition and set to be showcased to a global audience in excess of 400 million.

Related: Our 2018 Top 10 Courses in the Middle East ranking

Snakes and Ladders has Southgate, Luiten and Guerrier tied heading into Sunday in Muscat