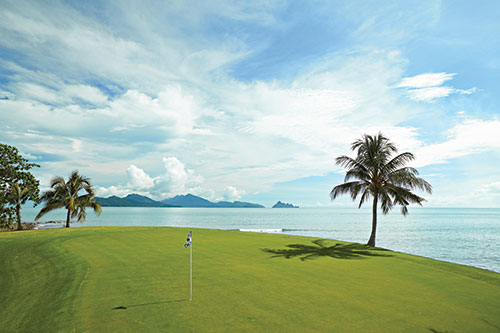 Bunkers are considered an integral feature on any golf course, but on the beautiful island of Langkawi, an award-winning Ernie Els design has shown that in the right location, you can easily do without them. And that location is a dramatic Malaysian rainforest.

A trip to the Datai entails a short night flight to Kuala Lumpur followed by a 45-minute hop to Malaysia’s northerly island of Langkawi. It feels like it should be harder to reach than that. More remote; more spectacularly removed from the glinting metropolises of the UAE. From an urban jungle to the real McCoy, complete with inquisitive monkeys and prehistoric-looking bird life, this is a dramatic assault on the senses. And then of course, there’s the small matter of an award-winning golf course.

Bunkers? Who needs ‘em? Not the Els Club Teluk Datai, apparently. I have to confess, when I first heard that this renovated golf course had entirely foregone arguably the game’s most essential hazard, I was initially skeptical.

I expected to be wowed by the scenery and surroundings, but underwhelmed by a layout that must surely suffer aesthetically from this omission. On the world’s greatest golf courses, the bunkers are a work of art in themselves – from the traps at Royal County Down that look like someone took a giant ice cream scoop to the turf, to the famous walled pots at St Andrews that have names like ‘Hell Bunker’ and the flawless curves and crushed white marble eye-poppers of Augusta National. Unless your name is Luke Donald you never enjoy venturing into bunkers, but they sure are pleasing to the eye, not to mention a valuable distance gauge.

Well, after playing just three holes of the Els Club Teluk Datai with Troon’s resident golf operations manager, Steven Outlaw, I had already forgotten this supposed bone of contention. A course with no sand is certainly unique, but then nothing about this layout could even remotely be placed in a bracket marked ‘standard’. Located in the north-west corner of Langkawi, the terrain is rugged, mountainous and covered by a rainforest that is many centuries old. With the far reaches of the golf course running up the coast to meet the calm waters of the Andaman Sea, Thailand’s southernmost island, the uninhabited Ko Tarutao, looms with a pale sunlit halo just five kilometres across the Strait of Malacca. In short, it is a spectacular spot to play golf. 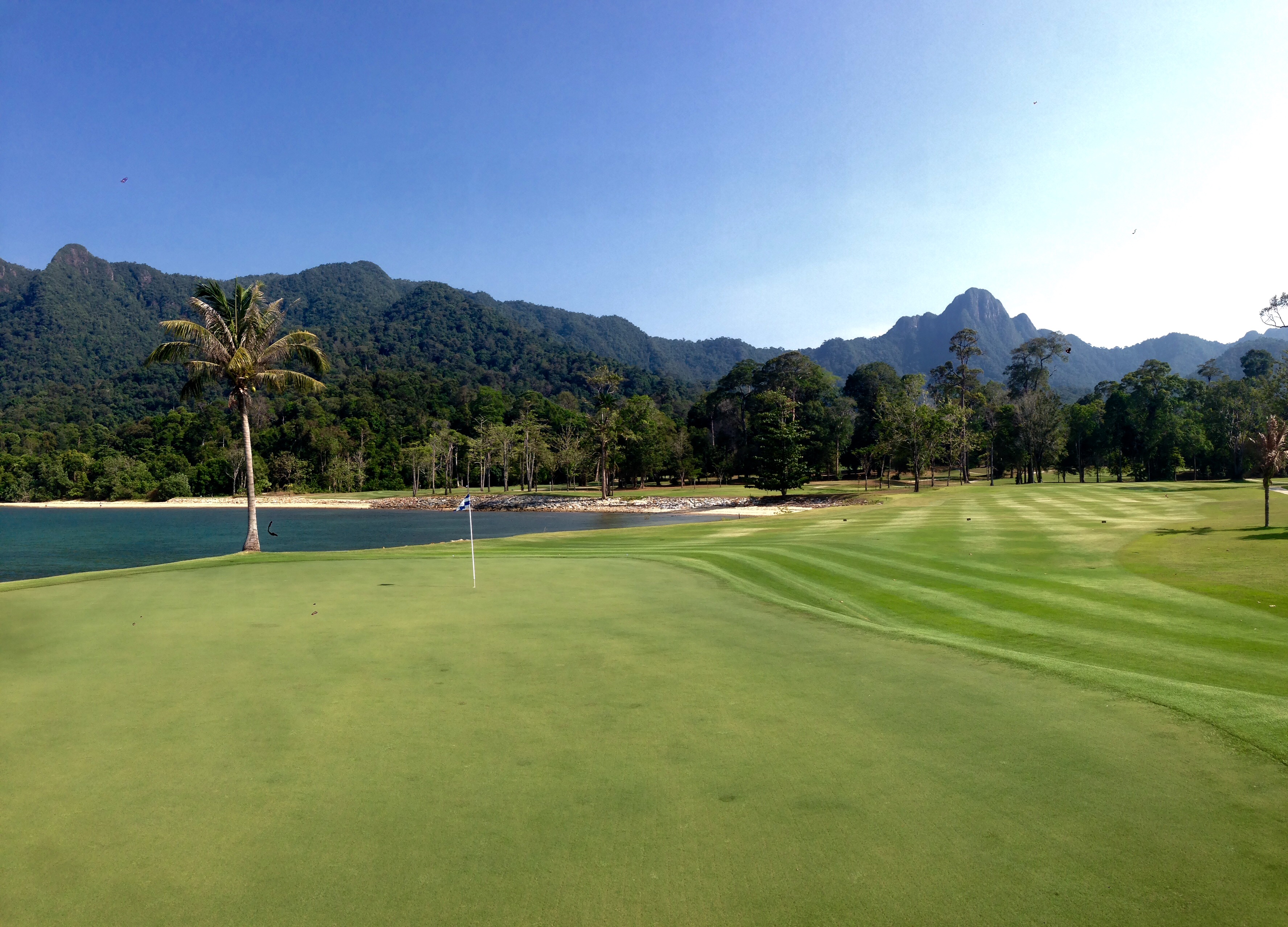 The par 5 seventh hole, with the distinctive peak of Mat Cincang looming in the background 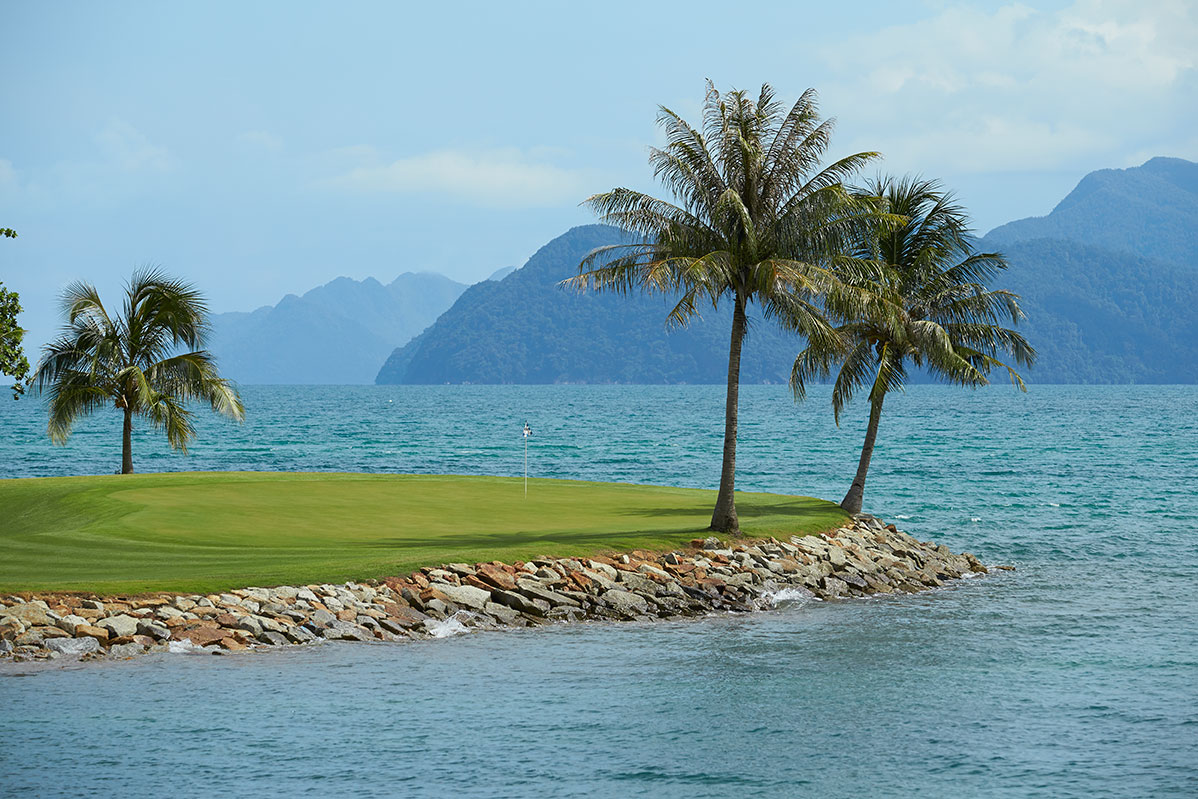 Carved through the rainforests that lie beneath the distinctive rocky peak of Mat Cincang (which serves as a useful alignment guide on several tee shots), the holes plunge through thick jungle and skirt the coastline on both the front and back nines. Originally over 20 years old, four-time major winner Els was tasked with the job of renovating and improving the course, which reopened for play just under two years ago.

The South African’s decision to make the new layout bunker-free was rooted in practicality. Although our visit fortunately coincided with one of Langkawi’s driest spells on record, when it rains here, they are the kind of deluges that would prompt Noah to gather supplies for a new Ark.

Els was told that in this volatile climate, keeping the bunkers water-free was a logistical nightmare, so he decided instead to make the jungle the star of the show. And boy, does it deliver.

You would naturally assume that if you keep your ball out of the trees, the guarantee of always playing from the grass would make the game considerably easier. If that is true, it wasn’t reflected by our scorecard.

Many of the greens are protected by the kind of swales and run-offs that characterise the Els Club’s sister venue in Dubai, and the rough can be knarly and difficult to get a clean contact from. If you start spraying it off the tee you can really rack up a number, because the walls of jungle that flank many holes have a ‘don’t bother looking for your ball’ vibe to them. Even Bear Grylls would have to think twice before wading in to recover his Pro V1.

The holes themselves contain plenty of variety, with changes in elevation and a number of doglegs keeping you on your toes. A stirring finish is highlighted by two cracking par 3s, the dramatically downhill 15th protected by a large pond – one of the few water hazards on the golf course, and the 17th, which runs right alongside a shoreline coincidentally known as ‘pebble beach’.

There are no bunkers on the 18-hole course, with the rainforest acting as the layout’s chief protection on almost every hole

The Teluk Datai has more in common with California’s famous venue than you might think, having joined it for the first time in Golf Digest U.S.’s compilation of the 100 greatest courses on the planet (entering at an impressive No.83 earlier this year). There is an unmistakable resort-type feel to it that may offend the type of golf snob who shuns all bar the championship courses, but for fun-factor alone, the Els Club Teluk Datai is hard to beat. It’s also in extremely good condition, even if the greens aren’t quite as fast and pure as those that we’re used to in the UAE.

But just as crucial to the overall package on Langkawi is the Datai Hotel itself, which is easily among Malaysia’s finest. Nestled on an elevated perch in the densest part of the forest, you can choose from canopy or beach accommodation, take guided nature walks or relax in surely one of the best locations for a spa in Asia. The jungle is alive with a vivid array of bird and animal life, brought into even sharper focus when we joined a small huddle of nature lovers in the lobby for a guided walk led by Malaysia’s answer to David Attenborough.

Such was this gentleman’s enthusiasm and depth of knowledge for every single inhabitant of the natural world – plant and animal, that after an hour of rushing, gesticulating and insightful anecdotes, we had barely made it past the swimming pool. Everything from the resident eagles to snakes, predatory fig trees and the problems with Darwin’s Theory of Evolution were tackled over the course of a hugely educational, if extremely truncated walk.

If it’s an exhilarating escape from the real world and a golf course to match that you’re seeking, then this is a place you simply have to visit.