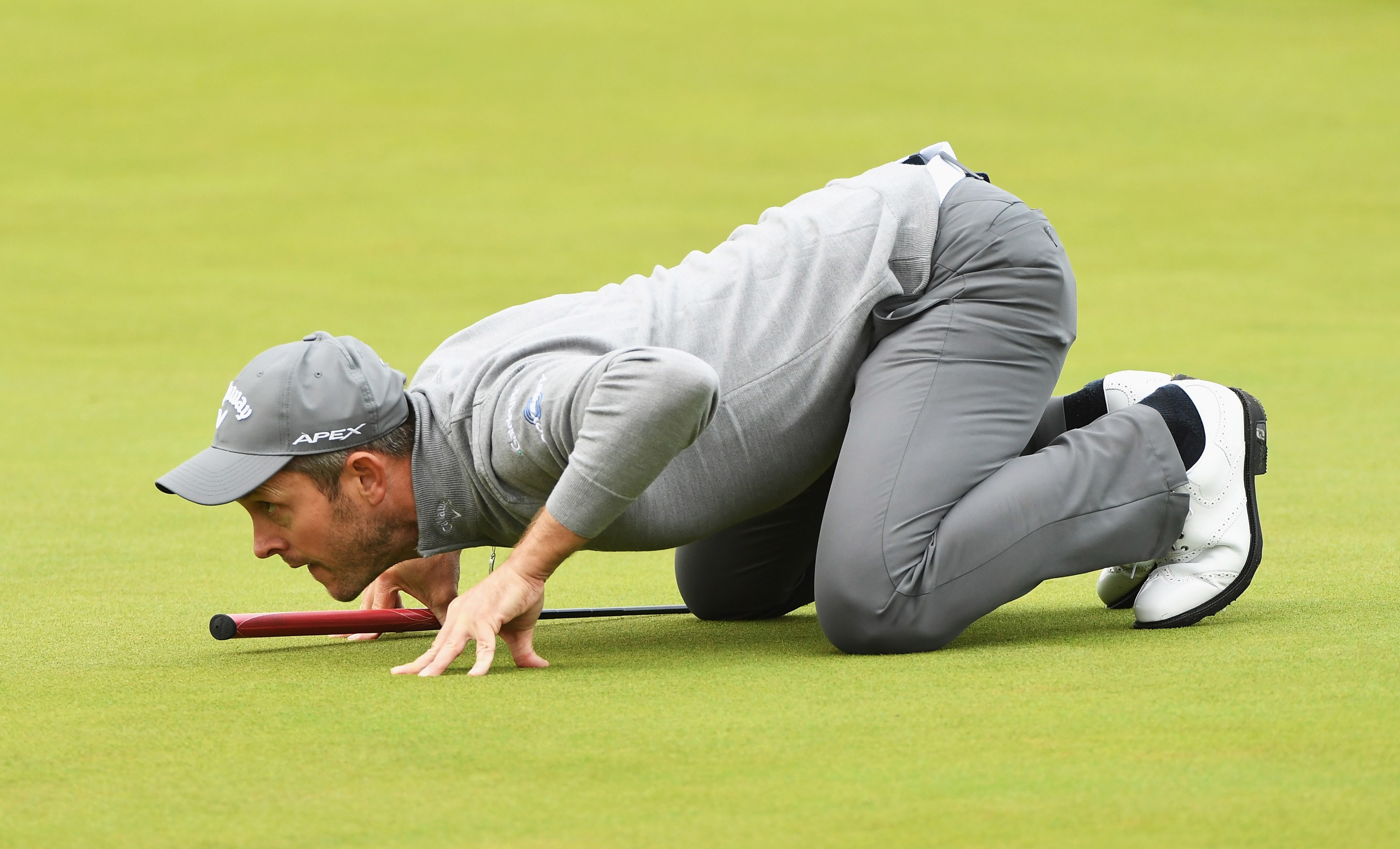 The 38-year-old former footballer-turned-golfer has taken a long journey to The Open and his first-ever major, but it was worth the trip.

Stuart Manley led the 146th Open Championship on Thursday at Royal Birkdale, but not for long. By the time the former footballer from Wales signed for his opening-round 68 and went through his media obligations, Jordan Spieth was making the turn in 31 on his way to a 65. Three hours later, while Manley on the practice round fine-tuning his swing with his long-time coach, U.S. Open champion Brooks Koepka also posted 65. That took some heat off Manley, who admitted he was up most of the night, looking at the clock at the home he rented near Birkdale.

It wasn’t the 6-month-old son that interrupted his sleep. It was his 6:45 a.m. tee time, and the sound of wind and rain outside his windows as Manley, at the seasoned age of 38, contemplated playing the first round in his first ever major-championship appearance.

Manley got away with only a bogey, then managed to scrap it around for the rest of the day, getting it to the 17th hole at just one over par. Holing his third shot from a bunker at the par 5 for eagle, then finishing with a 45-footer for birdie at the 18th, Manley played his way from anonymity to a spot on the leader board not far down from with Spieth, Koepka and Matt Kuchar. An argument could be made that Manley’s was the best round of the bunch.

“I kind of didn’t take on too many risks,” Manley explained. “I tried plotting my way around. I didn’t feel like I had my game with me today. I didn’t warm up too well. I had too many layers, including waterproofs for the rain. I didn’t get any rhythm on the range. So I thought, OK, this is the game I’ve got.”

Ranked 520th in the world and coming off six straight missed cuts—and seven in his last nine starts—Manley wasn’t exactly brimming with confidence. Since qualifying for Birkdale by finishing second in the Joburg Open in February, he has cashed just one check.

With that kind of meager success rate in golf—coupled with the aftereffects of a recent cold that had left his legs still feeling heavy, Manley was asked if he had second thoughts about his career in light of his soccer background. As a junior, he marked two of Wales’ all-time great players in Michael Owen and Craig Bellamy. But Manley insists he made the right call, explaining that he felt too much anxiety on the pitch, that he was nowhere near good enough and that he didn’t really enjoy himself. “It got too pressurized,” he said.

Instead, Manley had his father take a video of him swinging a club and ship it off to Steve Fell, the coach at West Florida, a Division II school in the state’s panhandle. It was the late 1990s. Fell had just lost a player who had actually played as a pro in Sweden and was looking to fill the spot in his starting five. So he took on a 4-handicap looking for a break.

During his career in Pensacola, Manley was famous for two things. The first was leading the Argonauts to the NCAA title in 2001. The second was a Jetta he bought with rusted out floorboards.

“We called it sparky,” Fell said. “Every once in a while, sparks came out of the bottom. When I was driving behind him, I was worried the thing might blow up and catch on fire. It was a bucket of bolts.”

After turning pro in 2003, Manley bounced back and forth between the European Tour and the Challenge Tour. His best season on the former came in 2014, when he had a pair of top-10s and earned €182,305.

Neil Matthews oversees the Wales national golf team and has known Manley since they played amateur golf together growing up in the 1990s. In 2011, he began working with Manley as his instructor. Their relationship has given him a unique perspective and an understanding of what it means for Manley to finally make his major debut, “It’s something he’s always aspired to,” Matthews said. “He’s had plenty of time to think about it and been able to do more preparation than any other week.”

With that, though, can come an accompanying amount of pressure. Beyond simply playing his first major, Manley also has to think about what this week might mean for his career in terms of locking up his European Tour card for 2018—and beyond.

“It could be a massive turning point,” Matthews said. “Some fantastic stories have come out of the Open Championship. Who knows what the next few days will hold.”

Come Thursday afternoon, the only thing that mattered to Manley was saying hello to his family at Royal Birkdale. His mom and dad were there, along with his three brothers, two of them twins. In the baby carriage his wife, Nicola, was pushing little Louis.

“Just recently he had a son,” said Fell when I reached him in his office in Pensacola. “I told him, ‘Just watch Stuart, you’re going to take off.’ It always seems to happen. It just settles them down a bit.”

After the round, Manley’s brother, Nathan, was poignant if not succinct, calling this a “super-proud moment.” For Stuart, who finished the day tied for 12th, it was a super-proud opportunity to build upon.