Steven Munro completes the UAE PGA Matchplay-Tour Championship double with victory over, and thanks to, Rory Young 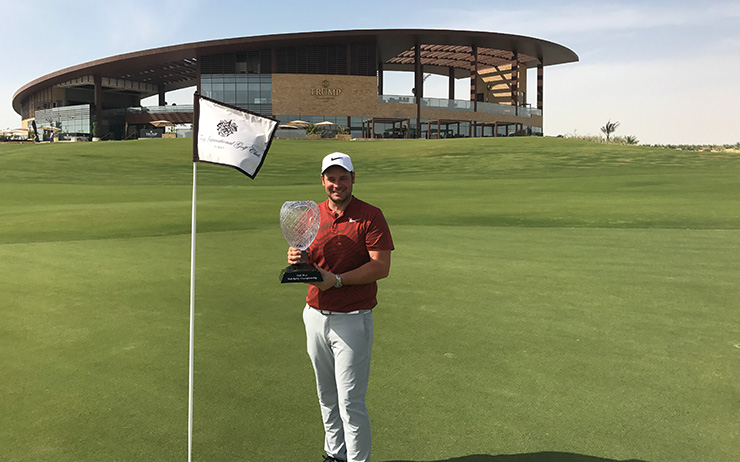 For probably the only time in his teaching career thus far, Al Ghazal professional Rory Young must regret being so darn good at his day job. Inside a week of giving UAE PGA chief executive Steven Munro a quick lesson, Young was toppled in Tuesday’s UAE PGA Matchplay final – by the benefactor of his coaching expertise.

“Funnily enough, Rory gave me a lesson last week. I was starting to get a bit lax with my set-up which he fixed and now I’ve started to get comfortable with the change,” Munro said. “I’m sure he doesn’t regret it [the lesson], well maybe a little. But no, he’s a good lad.”

The victory means the UAE PGA’s two most prestigious trophies now have pride of place on the Munro mantelpiece, at least until Monday when the Abu Dhabi-based professional attempts to defend his Tour Championship title over two days and 36-holes of strokeplay at Al Zorah in Ajman.

“It’s great to win the matchplay for my first time. I wanted the double, not many have achieved that,” Munro said.

“I have managed to get the semis a couple of times only to be beaten by birdies and eagles and stuff on the last so to go the extra hurdle is very pleasing. I’ve been fortunate to play some good golf over the last year and I’m delighted to win both flagship events the UAE PGA has to offer.”

Munro enjoyed a walkover win earlier Tuesday when Jumeirah Golf Estates’ Thomas Henderson was forced to forfeit their semifinal with a finger injury.

Young was “two or three under par” when he ousted defending matchplay champion Callum Nicoll (Abu Dhabi GC) 3&2 in the other semifinal but was on the back foot early in the decider – three down through three – and couldn’t conjure up any of his morning magic.

He got it back to two down on the par 4 4th, but a bogey five on the tough 7th saw Munro stretch out to 3up. Young won the 10th to reduce Munro’s buffer to two holes once again before the 11th proved the pivotal hole of the final. 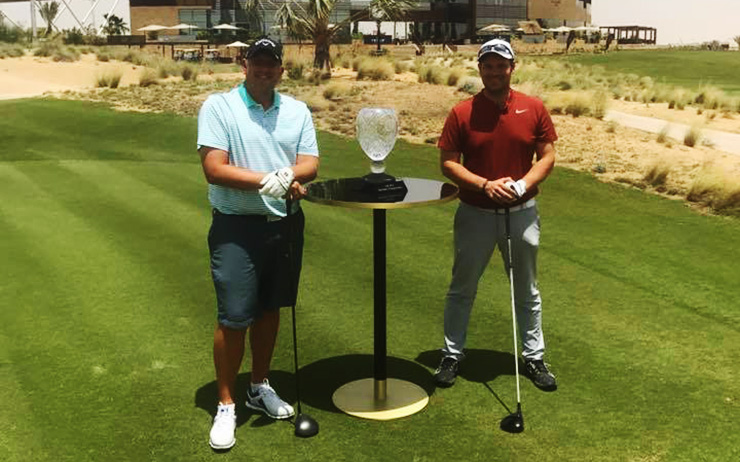 Young opted for an iron off the tee on the par 4 and wedged to 12 feet. Munro took driver and watched his ball fall off the left edge of the driveable green, leaving a delicate chip which he was happy to leave just outside Young’s ball. He then holed the birdie putt, Young missed and was again three down. Munro birdied 14th, gave that hole back with a poor tee shot on the 15th but was soon shaking hands when he laser beamed a 111-yard approach to three inches on the 16th.

“My approach in the final was to try and play solid golf, not make any mistakes and see if that forced Rory into mistakes. Going three up through three allowed me to concentrate on fairways and greens and Rory would be the first to admit he didn’t play his best in the final,” Munro said.

“It’s the fourth time I’ve played Trump since it opened. I like to give it a bit of a smack [off the tee] and with the fairways being quite generous, it gave me the chance to play to my strength. I’m pretty comfortable there and that made the final pretty uneventful.”

It was Munrio’s second win of the UAE PGA Tour season after a recent win at Arabian Ranches. With eight other second or T2 placings, Munro is second on the order of merit heading into next week’s Tour Championship.

However, Dubai Creek Golf & Yacht Club professional Cennydd Mills has won five times this season and could yet take an unassailable lead into Al Zorah once the standings are recalculated.

“Cen finished second at Al Ain so is probably too far ahead even though the Matchplay and the Tour Championship carry 50 percent extra points weighting. I’m probably too far behind but we’ll see.”