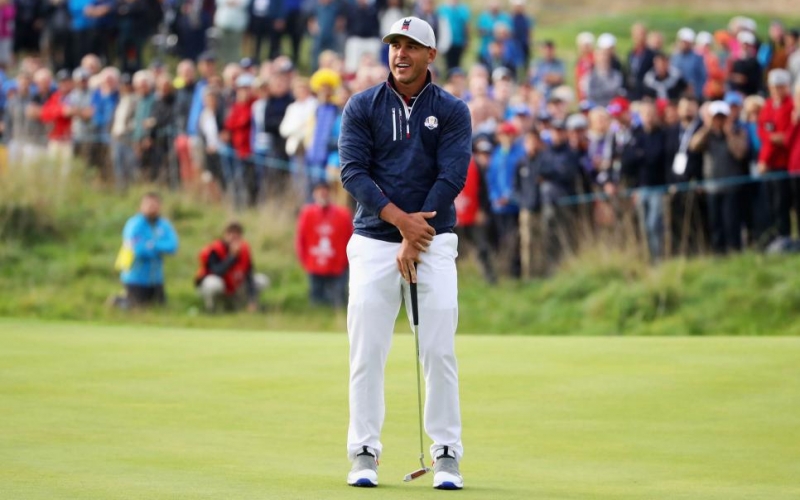 By Shane Ryan
HAVEN, Wis. — In his first press conference of Ryder Cup week, U.S. Captain Steve Stricker addressed what has become the most incendiary off-course story in golf in 2021. It’s Brooks-Bryson, the inescapable feud, and it feels particularly relevant for an American team that has suffered from what can charitably be called “chemistry issues” in recent matches (Brooks vs. DJ, Patrick Reed vs. Jordan Spieth, Phil Mickelson vs. Tom Watson). If there’s going to be more toxicity this week, it seems very likely to stem from the bad blood between two of America’s best golfers.

Stricker, though, claims that he’s not concerned.

“It’s a non-issue, really, for me and the team,” he said on Monday. “We got together a few weeks ago, the six of us [Ryder Cup automatic qualifiers] and I’ve had conversations with them both. They have assured me it’s not going to be an issue. I have no worries whatsoever.”

When asked about the seemingly ludicrous proposition of pairing them together, Stricker wouldn’t fully rule out the possibility.

“I don’t think so at this point,” he said, “but things could change. Could always happen. But probably not. But again, I had a dinner; they all showed up. We had great conversation, great talks. So I’m not seeing it as an issue at all, and they are completely on board.”

Koepka was not seen on the grounds Monday, though Stricker indicated he had arrived in Wisconsin. DeChambeau spent time at the driving range and the putting green, and chatted with Tony Finau.

Another concern with Koepka is the state of his wrist, which led him to withdraw from the Tour Championship earlier this month and cast some doubt on his chances of playing the Ryder Cup. On that front, too, Stricker struck a reassuring note.

“I’ve been talking to him ever since it happened,” Stricker said. “You know, check in with him every couple of days. He tells me everything is 100 percent and everything is ready and raring to go. … From what I understand, he’s fully healed and ready for everything.”

And as if two Koepka-related issues weren’t enough, there was time for a third. In an interview with Golf Digest published a week ago, Koepka sounded less than enthused about playing in the Ryder Cup, citing the hectic schedule and inability to “decompress,” and speculating that, “it’s just maybe not in my DNA, the team sports thing.”

In this case, Stricker was concerned enough to talk to Koepka about the remarks, but left that conversation feeling relieved.

“I’ve had experiences with Brooks over many, many of these teams,” Stricker said, “and the conversations that I have had with him and what I have personally seen in the team room does not jive up to what I was reading in those articles. Again, I am not worried about Brooks. He assures me he’s healthy. He assures me that he is 100 percent all-in on this team and whatever he needs to do for this team to become the winner at the end of the week.”

As Stricker pointed out, he’s one of the most experienced Ryder Cup captains ever, and his aim from the start has been to out-prepare Padraig Harrington. Preparation is almost at an end, and now comes everything he can’t control. His hope is that whatever complications arise starting Friday, Brooks Koepka’s feud, his injury, or his love for the Ryder Cup are not one of them.

How Bryson DeChambeau won the week, and found redemption, after summer to forget

Tiger congratulates winning U.S. team after motiving them all week

Could Kevin Na steal a Ryder Cup pick? He’s making one hell of a case to captain Steve Stricker