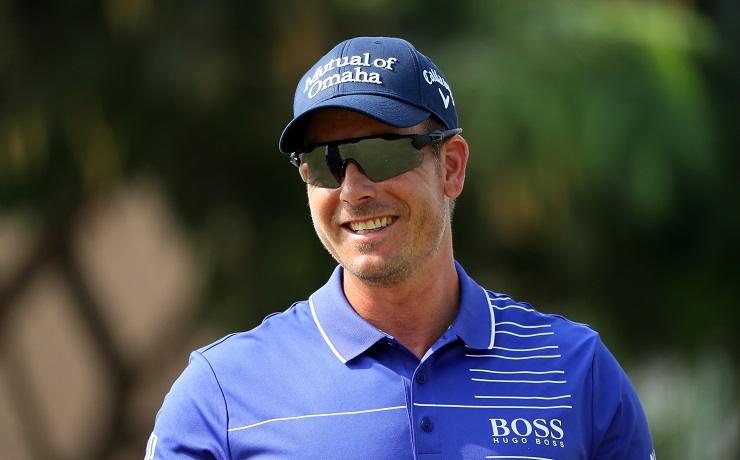 On any other day in any other circumstances, Henrik Stenson’s round of 70 Saturday at the DP World Tour Championship would be compartmentalised where it belonged, an ordinary score buried down a leaderboard littered with extraordinary numbers.

But the Swede’s signature on a two under round was no less significant that Rafa Cabrera Bello’s 63 or leader Victor Dubuisson’s eight under 64 when taken in the context of a season’s body of work.

Stenson was going backwards fast on moving day at three over par through 10 holes around Earth, giving Alex Noren hope that the European Tour’s order of merit title will go down to the wire.

But the reigning Open champion and Race to Dubai pole-sitter proceeded to rattle off five birdies in six holes, including a chip in on Earth’s tricky par 4 16th, to rescue his round and perhaps his European Tour season.

A round of 69 on Saturday took Noren to seven under 209, two shots ahead of Stenson, and means he still has a sniff of pipping his countryman for the Harry Vardon Trophy.

But Stenson will sleep better after his back nine recovery, a third Race to Dubai title and the $1.25 million bonus his to lose on Sunday.

“I’ve just got to go out and try to play a solid round tomorrow,” the 40-year-old said afterwards.

“I know if Alex finishes second on his own, I’ve got to be inside the top eight, so that’s kind of the scenario that I’m trying to achieve. Obviously it’s a long way for me to be second on my own in case he were to win.

“I’ve just got to keep at it and try and play a good round tomorrow, finish off the week, and we can start counting [the money] afterwards.”

Stenson’s birdie at 16 was a little fortuitous as his lob shot had a little too much on it, only for the ball to cannon in off the flagstick and nestle in the bottom of the cup. Sometimes it’s better to be lucky than good as the expression on the face of his caddy, Gareth Lloyd, illustrated.

He did produce a deftly weighted pitch shot from a tricky spot above a bunker on 18 to set up what would have been a fifth straight birdie to finish but pushed the putt to finish the third round in a six-way tie for 22nd alongside Rory McIlroy (68).

“I turned it around at least and yeah, I’ve got to be pretty pleased with the way we managed to play on the way home,” Stenson said.

Masters champion Danny Willett, second in the standings coming into the week, carded a forgettable 76 to tumble 34 places down the leaderboard into a share of 51st place at one over par.  – Kent Gray