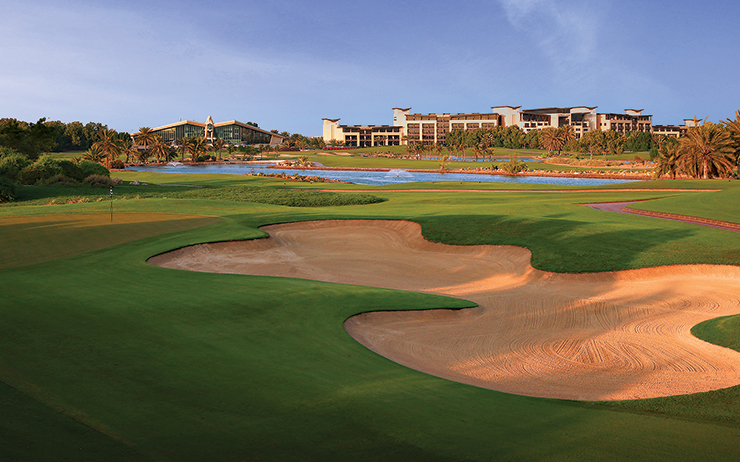 This was a far cry from the Abu Dhabi HSBC Golf Championship.

Standing on the first tee of the National course on a balmy April afternoon, we were accompanied by an energetic soundtrack from not one but two enormous sound systems to our left. One was overseeing festivities at the famous Westin brunch (“pretty much the best in town,” my PGA professional playing partner Clinton Norris informed me) while a rival group of party-goers were getting in on the act with what looked like a giant South African braai on the lawn formerly occupied by January’s championship village.

It wasn’t quite as surreal as watching Gary Stal beat Martin Kaymer from 10 shots back, but it certainly made me wonder whether I had chosen the wrong way to spend my Friday afternoon. Particularly since Clinton beat me 4&3.

Golf can be an all too serious game at times, but when it comes to having a good time, the Westin Abu Dhabi Golf Resort & Spa and the adjacent Abu Dhabi Golf Club may be the best one-two punch combination in town. A constant hive of energy even in the summer months, the Westin does everything well, with great dining outlets offering quality and a relaxed, welcoming atmosphere in equal measure.

As for the golf course, it is a stringent test each January for the best players on the European Tour, but when the rough retreats and the tee boxes return to positions where us amateurs can actually see the fairway we’re trying to hit, the National becomes a much more fun course to play. Furthermore, the changes they’ve made to the course over the years have unquestionably improved it. Some great courses lose their charm when given a makeover, but the powers that be behind the Abu Dhabi HSBC Golf Championship have been careful not to alter the fundamental character of the National course. There’s more water in play now yes, but on the flipside there’s also more green to aim at.

Our trip started in Dubai behind the wheel of a brand new BMW 4 Series Gran Coupé, which quickly established itself as my favourite of the cars we have driven in the Stay & Play series. When it comes to automotive beauty, BMW is perhaps not the first name that springs to mind, but the Gran Coupé is stunning. Its sleek, muscular frame gives the strict impression of a car that means business, but clambering into the driver’s seat does not require you to be a contortionist, as with smaller sport coupés.

Comfort and space are prioritised alongside performance, meaning you get the best of both worlds, with the BMW 435i Gran Coupé sprinting from 0 to 100 km/h in just 5.5 seconds. This car feels like its barely moving at 140, such is the smoothness of the ride.

Upon checking into the Westin, I discovered that the hotel is not the only place in the vicinity that knows how to serve up a culinary treat. Abu Dhabi Golf Club lays on one of the best buffets around on a Thursday night, with a live barbecue serving up everything from juicy steak to king prawns and accompanied by live music and a shisha.

At the resort itself, you can book yourself in for a session at the Heavenly Spa, lounge by the pool or loosen the belt buckle and ready yourself for a tilt at the Fairways brunch. Your only issue, in fact, might be finding enough time to allocate to a game of golf.

The Course
As host venue of the Abu Dhabi HSBC Golf Championship since 2006, the National course at Abu Dhabi Golf Club has undergone many changes and improvements to its layout to become one of the most respected tracks on the European Tour. The most recent of these alterations saw water brought more into play on holes two, four, 12 and 16.

The Car
The new BMW 4 Series Gran Coupé combines the sleek look of a two-door coupé with the functionality provided by four doors and expansive spaciousness, including a wide access luggage compartment that can comfortably accommodate a couple of sets of golf clubs. It’s a beauty to look at with performance to match.

The Resort
The Westin Abu Dhabi Golf Resort & Spa is offering a Summer Stay & Play package which includes one night in a Deluxe Room, breakfast and one green fee at either Abu Dhabi Golf Club or Saadiyat Beach GC for just AED 600

For double occupancy the price drops to AED 475. Bookings can be made at: [email protected]