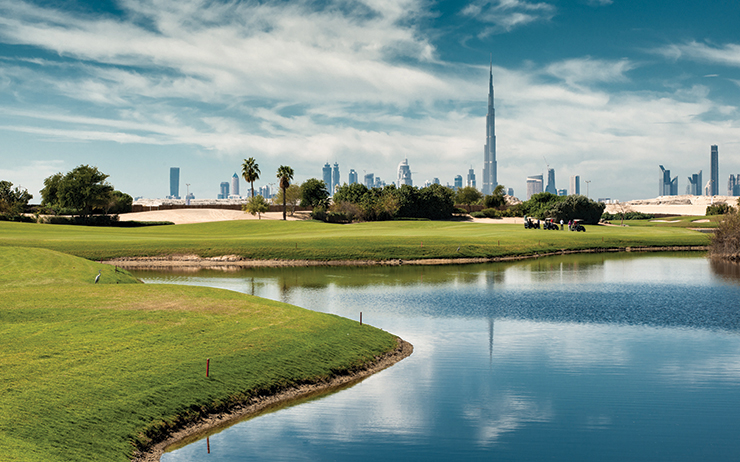 The general perception of Dubai’s many golf courses is that they operate independently of the city’s luxury hotels. But whether you’re a visitor in town or a resident, the combination of Festival City’s InterContinental Hotel and the Al Badia Golf Club is an instant hit
By Robbie Greenfield

Having covered golf in the region for a little under 10 years, it was only a few months ago that I first had the opportunity to combine a round with a hotel stay, at the InterContinental Dubai Festival City and neighbouring Al Badia Golf Club. To me, Dubai has always felt like a city where golf stands apart from the myriad of luxury hotels. We’ve seen hotel and golf resort concepts come up in other parts of the UAE, like Abu Dhabi and Ras Al Khaimah, but the Jebel Ali Resort and boutique offering at the Montgomerie aside, Dubai does not really fit this model.

Instead, you have the urban golf break, and nowhere is this better enjoyed than at the smart, sophisticated InterContinental and Al Badia Golf Club. Geographically, this may not be the heartland of old Dubai, but  located on the banks of the Creek, it’s very much on the intersection of where the two wildly different sides of this city collide.

And because of that, you get the best of both worlds. You get a modern hotel with exceptional service, twinned with one of my favourite golf courses in town. This is contemporary fare, but you’re not blinded by the blinking extravagance that exists further along in the Downtown and Marina districts.

Dubai has some excellent beach resorts, but the InterContinental Festival City is proof that when it comes to polished, multi-purpose hospitality with an urban edge, the emirate is equally adept. The service here hits that perfect pitch between being attentive but not overbearing . At the impeccably chilled but busy Vista Lounge, you can look out over the Creek while enjoying a drink or a shisha. For a city that runs on such a pounding heartbeat, this is as laid back as it gets.

Equally, the dining options here are first rate. After attacking an enormous cut of sirloin at the Terra Firma Steakhouse, the Saturday Arabic brunch at Anise was a less formal but no less mouthwatering follow-up.  All of which left me a bit reluctant to leave the confines of the hotel and brave the exacting test of Robert Trent Jones Junior’s Al Badia course. Now nearly 10 years old, the layout has matured into a worthy host of November’s Challenge Tour Grand Final

I always marvel at the scores when it hosts the pros on both the MENA and Challenge Tours, because for me, Al Badia’s front nine is one of the hardest stretches of golf in the UAE. The par 3 third hole is only appetising if you happen to hit the ball dead straight, because neither right or left offers much in the way of a second shot. The par 5 fifth is a beast from start to finish. Finding the fairway with your tee shot is an accomplisment in its own right, until you realise that there is at least two more perilous shots to tackle. Six is a clever design where you’re never quite sure which route to take off the tee (indecision is both a friend and enemy of every golfer) but for all its scary holes, Al Badia is not without generosity in places.

The trick to scoring well here is to ride out the difficult holes and plunder the birdie chances. Only one and eight give you much cause for hope on the front nine, but from there, it gets easier. I will never enjoy the greens here as much as I do on certain other courses, but that’s a personal preference.

The hotel lies at the intersection between old and new Dubai, and it features elements of both.

Ultimately, Al Badia is a course with a sense of fun, which is what the game should always be about. For tourists looking to grab a quick round, or residents seeking to enjoy the discounted green fees and a night or two in one of Dubai’s most underrated hotels, this is a no-brainer.