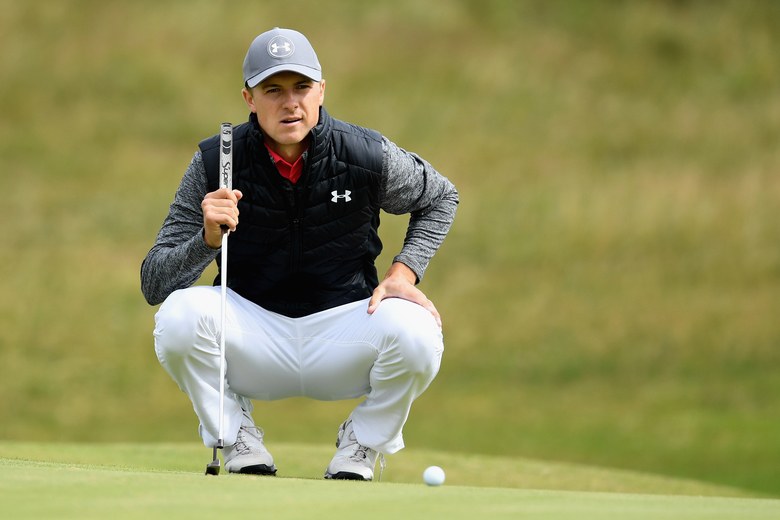 From the breakfast table to the range, on to the first tee and all the way to the media centre, Jordan Spieth was a man in complete control on the opening day of the 146th Open Championship. So much so he even offered an unprompted assessment of his day before the media were given the chance to ask.

“I give it a nine [out of 10] across the board for everything – tee balls, ball-striking, short game and putting. So things are in check. It’s just about keeping it consistent.”

No one was arguing. A five under-65, blemished only by a short miss for birdie on 18 that would have seen him tie Craig Stadler in 1983 for the lowest first round at Royal Birkdale, earned Spieth a share of the overnight lead alongside U.S. Open champion Brooks Koepka and major-less Matt Kuchar.

With wild weather forecast, the 23-year-old Texan set out Thursday like it was Saturday, figuring he needed to push fast-forward on the traditional moving day. He mightn’t have joined Stadler in the history books but did eclipse his opening 67 at St Andrews in 2015 and, in fact, all 17 of his previous Open rounds. Mission accomplished.

It affords Spieth the breathing space he suspects he might need should the wind (predicted to gust in excess of 35mph) and rain (50% chance at 3pm and 80% at 4pm) arrive as feared.

“Given the forecast coming in, I thought you really needed to be in the red today,” said Spieth, eyeing his 2.48pm (5.48pm UAE time) tee time Friday.

“You can certainly make up ground, in a round like tomorrow, and we’ll see it happen, but being able to kind of play with shots or play a little more conservative, you [can] make a bogey, because you don’t try to do too much on a day like tomorrow, that’s nice and very helpful.”

Spieth will spend Friday morning on the sofa watching the early starters as part of his second round prep. He did so before teeing off in the more difficult conditions Thursday after a breakfast of “eggs and avocado and toast, orange juice, shake”. The dietary questions came after Spieth revealed the his new health kick, saying he is now eating better and giving as good in the gym as he always has on the range.

Is he seeing benefits? You better believe it.

“I feel like I’m more physically fit than I have been, and it’s allowing me to consistently get around my body better. And the mistakes that have come up in pressure situations or just a shot in general that my mind’s off of what I’m trying to do, those are happening less.

“And once you start hitting those shots more consistently, you start even dialling it in more and more. My groupings on iron shots, if I’m with Cameron having a lesson, are tighter than they’ve been in past years, working different ball flights and trajectories. You need to have confidence in each ball flight and trajectory, because you have to hit them all out here in a tournament like this.”

Ominously for the field, Spieth also has his putter going to go with the confidence attained from victory in his last outing at The Travelers Championship.

“I’ve been putting in a lot of work with the putting and trying to get it back to the confidence that I’ve had the last couple of years. It’s just been the one thing that’s been off this year. My ball-striking has been better in any years that I’ve ever played golf.

“It’s been about capitalising, which is frustrating, considering I’m used to seeing the ball go in. And then I’m hitting it in tighter but it hasn’t been going in. But then we won. Three weeks ago, and then I had some rest. So I feel rested and confident, which is a good feeling. It’s tough to have that feeling this late in the season. I thought that was an important break for me.”

The day began with two new habits on the range, the first some track man number crunching with his instructor, Cameron McCormick, to assist Spieth’s club selection in the “heavy [cross] winds” The second could very well turn into a superstition after McCormick offered him a stick of gum.

For some reason, he took it. “I was one under through two, and I thought I better keep it in and it’s still in now,” Spieth said. “It’s probably about time for a new piece.”

After missing but three greens and holing three of his five birdie putts from outside 10 feet, it was no surprise the mint stayed in.

“I’d call it a top five probably, major round that I’ve played, maybe fifth or sixth, something like that,” Spieth said. “I couldn’t have done much better than that today.”

Come Sunday, Spieth might well need to reassess the importance of his 67 as well as a steady supply of minty freshness.