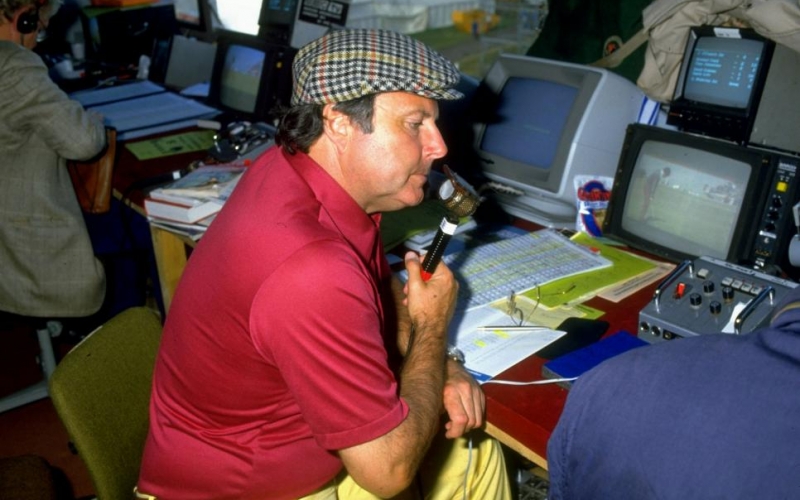 By John Feinstein
One of the most over-used words in sports is unique. The word means one of a kind and there just aren’t that many things—or people—that are unique.

Peter Alliss, who died over the weekend at 89, was unique.

Alliss is in the World Golf Hall of Fame not because he was a very good player (which he certainly was) but because he was absolutely brilliant as a TV commentator. He was funny and irreverent and always willing to speak his mind.

In today’s TV world, no one ever hits a bad shot—there’s always an excuse. When Alliss saw a bad shot, he called it a bad shot. Occasionally he’d just say, “oh my,” and let the picture tell the rest of the story. You never—I mean NEVER—heard him say, “he hit a good putt,” when someone missed from inside 10 feet.

“A good putt goes in the hole,” he told me one night, rolling his eyes as the thought of anything different.

He also seemed to know just what to say at climactic moments. When Tom Watson needed to two-putt the 18th green at Pebble Beach to win the 1982 U.S. Open and he proceeded to roll in his birdie putt, Alliss said simply: “Did it in one. Elementary my dear Watson.”

I had the pleasure—the honour really—of dining with Alliss on numerous occasions courtesy of our mutual friend Frank Hannigan. After retiring as senior executive director of the USGA in 1989, Hannigan joined ABC as a rules expert and an unofficial consultant on all things golf. He and Alliss, who first worked for ABC in 1974, were good friends, bonded by their love of golf and a frequently sceptical view of the world.

The first time I was invited to join the two men at dinner was at Westchester in June 1994 when I was researching, A Good Walk Spoiled. Hannigan, who frequently informed me that, while I might know something (though not as much as him) about basketball, but nothing about golf, told me en route to dinner that if I was smart I would, “shut up and listen for once in your life because I’m much smarter than you and Peter’s much smarter than me.”

Hannigan was right. What was remarkable about Alliss was that he wasn’t that much different off-air than he was on-air. The language—especially after some wine—was a little saltier, but his ability to make a point in fewer words than most was exactly the same.

When I mistakenly began to warble on about the wonders of the Ryder Cup—I’d been to my first one the previous fall—he cut me off quickly.

“I played in eight of them,” he said. “Back then, even though you fellows [the U.S.] should have almost always beaten us easily, we kept it competitive most of the time because we were playing for God and the Queen. Or, at the very least, the Queen. Now, half the time the players show up because it will help them with their [sponsor] contracts.”

RELATED: Why Peter Alliss will forever be one of golf’s distinctive characters

Having seen the looks of joy and anguish on the players faces at The Belfry nine months earlier, I disagreed. That was a little like trying to stop waves from crashing on a beach. Alliss and Hannigan were both smarter than me. 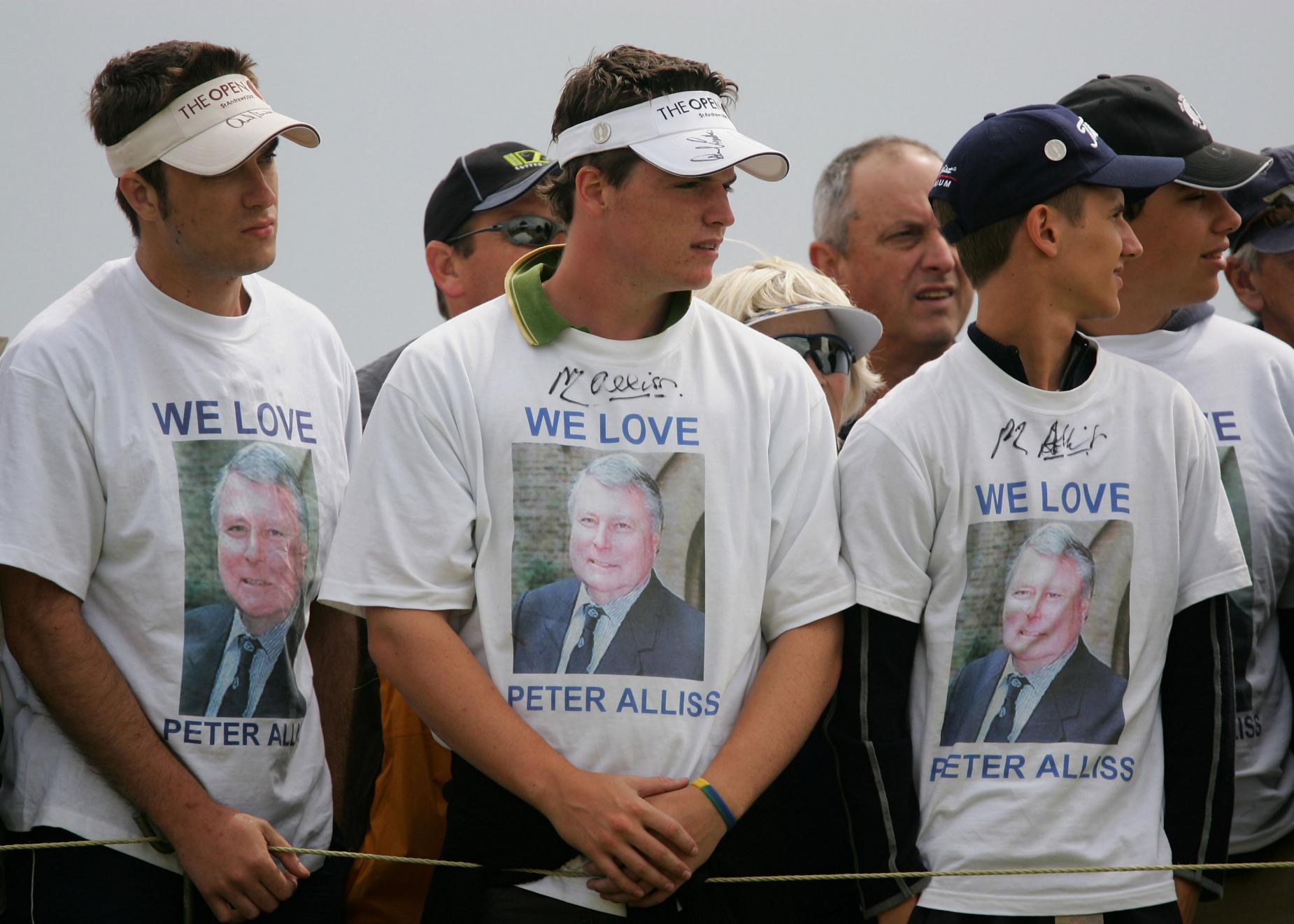 Warren Little
Golf fans show their appreciation for Peter Alliss during the first round of the 2005 British Open.

Hannigan quickly pointed out that Alliss had been undefeated in Ryder Cup matches against Arnold Palmer. “Only in singles,” Alliss said. “I beat him once, we halved once. Lost to him in a foursomes match.”

A few years later, when Tiger Woods burst on to the scene, Alliss wasn’t the least bit sceptical about his game. Late in 1996—before Woods’ dominant win at the Masters the following April—he said, “he’s not the best young player I’ve ever seen. He’s the best player I’ve ever seen—period. He’ll dominate the game the same way the great man [he always called Nicklaus ‘the great man,’] did, only more so.”

Hannigan, who would tell you sunsets on the beach were overrated, scoffed. “Come on,” he said. “Talk to me when the kid wins something that matters. I’m not ready to crown him king because he wins in Vegas.”

We all know how that turned out.

As you might imagine, I became addicted to dinners with Alliss and Hannigan. It was entertaining and often fall-down-funny, but it was also like getting a Ph.d in golf. Peter was born in 1931 and had been around the game his entire life—since his father had been a successful golf pro himself. If you brought up a name or a golf course or a past major championship, Peter could give a seminar on it instantly, usually with several funny anecdotes to illustrate the facts.

When my book came out, I showed up for dinner one night with copies for Peter and Frank. I proudly handed them over saying something like, “I can’t tell you how much I appreciate …”

Peter cut me off. “Did you inscribe this?” he asked.

Peter shook his head. “I really don’t like a book inscribed unless I consider it worthy. I wish you’d waited.” Then he smiled. “I do appreciate the thought though. Thank you.” A few weeks later, a note arrived at my house. It said simply: “Well done. I will proudly keep this in my library.”

Eight years ago, Peter and Dan Jenkins were inducted into the World Golf Hall of Fame, meaning that the two funniest men in golf got to speak at the usually somnambulant induction ceremony. Not surprisingly, Dan was terrific. But Peter stole the show. Alliss was at his witty best during his 2012 World Golf Hall of Fame induction speech.

He began by explaining that his life had been both simple and fortunate: “I waffled along loving the game of golf.” He talked about his playing career, which included those eight Ryder Cups, 21 tournament wins worldwide and five top-10 finishes in 25 starts at the Open Championship. Not winning the event that mattered most to him might have been his one regret. “The thing is, I was good enough to win,” he said one night. “I just never did.”

He was grateful, gracious and funny. Finally, as he wound down, he told the story about the headmistress at his school, describing the last report she’d sent home to his parents. “Peter does have a brain,” he recited. “But he’s rather loathed to use it.” Her conclusion? “I fear for his future.”

When the laughs quieted, Peter said: “If there is such a thing as heaven and if people do look down, well, mom and dad, look at this lot.” He gestured with his hands at the rapt audience. “It’s all fallen into place.”

And then, he added: “And Mrs. Weymouth, if you’re there …” His right arm shot towards the sky, middle finger extended. It was, without question, one of the great mic-drops in history, even though there was no mic for him to drop.

The audience came to its feet, laughing and crying all at once. That was Peter Alliss. You never knew what was coming next, but inevitably, it was smarter and funnier than you could possibly have predicted. Not some of the time, all of the time.