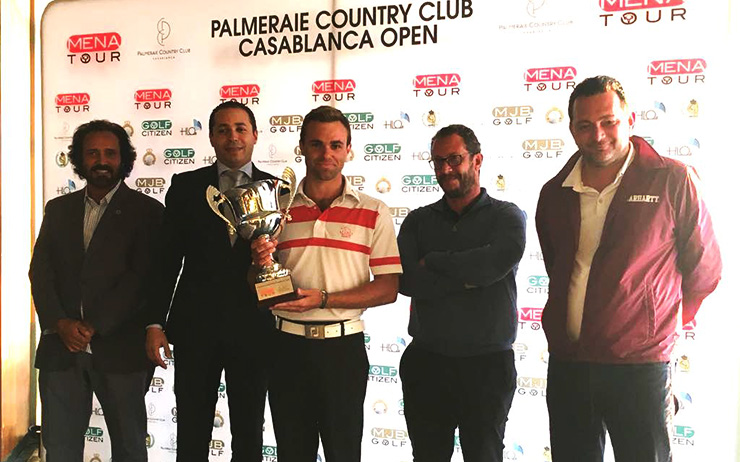 Leo Lilja has survived the longest playoff in MENA Tour history to secure a dramatic victory on debut in Morocco.

The 24-year-old Spanish rookie, who had only qualified for the tour via Q-School the previous week, pipped Englishman Luke Joy on the sixth hole of extra time at the season-opening Palmeraie Country Club Casablanca Open with a two-putt birdie on the par 5 17th.

Lilja’s victory in the marathon playoff came after the Spaniard fired a bogey-free 68 to set a clubhouse target of eight-under, a number Joy matched with a closing 69 after three birdies on his homeward nine offset an early bogey.

He is the third Spaniard to win on the developmental Pro-Am tour after Gabriel Canizares and Carlos Balmaseda.

“I am really very, very happy. Just can’t believe that I have won my very first event on the tour. It feels so surreal,” said Lilja after receiving the winner’s trophy from Ali Ouaziz, director of operations at Palmeraie Country Club.

“I played really solid during the week and holed many good putts out there which was the key.”

Joy, a two-time winner on the tour, said in his blog that he planned to dull his disappointment with a “heavy night” out. “Coffee and Nutella crepe it is. Got to love Morocco!”

“I can’t say I’m not frustrated not to get the win this week but the game is progressing nicely and I need to keep pushing forward and keep improving,” Joy continued.

Morocco’s Younes El Hassani finished a creditable fourth alongside Scot Jack McDonald after posting a final round 70. On six-under-par 207, El Hassani comfortably won the MENA division by two shots over compatriot Faycal Serghini, who carded a final round 68. Ahmed-Reda Rhazali and Mohamed Belaroussia were a distant third in the Arab division at three over.

Dutchman Pierre Junior Verlaar led from start to finish to win the amateur division on one under, a seven shots ahead of England’s Todd Clements.

The MENA Tour travels to Mohammedia, a port city on the west coast of Morocco between Casablanca and Rabat, for the Royal Golf Mohammedia Open at Royal Golf D’Anfa, another $40,0000 event starting on March 19. The MENA Tour’s first amateur winner, Rayhan Thomas, is included in the field after playing the European Tour’s Hero Indian Open.