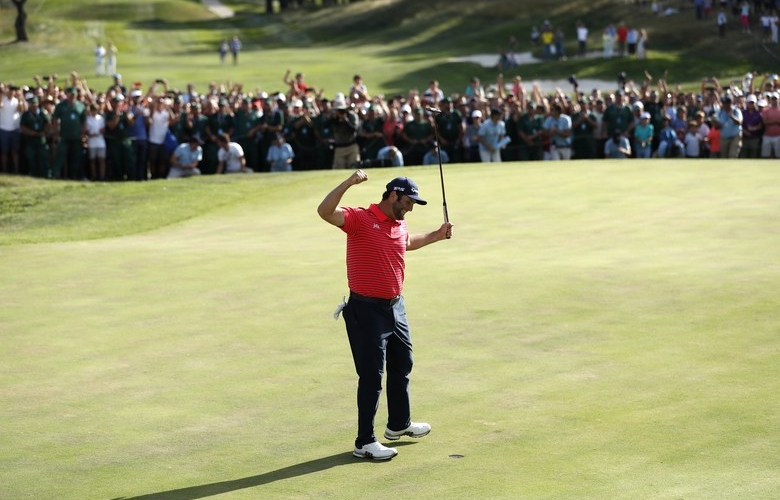 By John Huggan
When Jon Rahm starts winning national titles, he just doesn’t know when to stop. Already the holder of two Irish Opens, the 24-year-old Spaniard replicated that feat by successfully defending the Open de Espana at Club de Campo in Madrid.

A third-round 63 that included eight birdies and an eagle—he played the first seven holes of a back-nine 28 in a remarkable seven-under-par—was the key to Rahm’s victory. Holding a five-shot lead with 18 holes to play, the world No. 5 was never seriously threatened thereafter. It was a performance of almost total domination.

Rahm—the highest-ranked player in the field—closed with a 66 that took him to 22-under-par 262, five shots better than compatriot Rafa Cabrera-Bello. Another Spaniard, Samuel Del Val, was third, at 15under par. With Adri Arnaus T-4 and former Masters champion Sergio Garcia amongst a five-strong pack tied for seventh, it was quite a week for the home players.

But especially for the now two-time champion. This was Rahm’s fifth European Tour victory in only his 39th start. By way of comparison, the late Seve Ballesteros, whose 50 wins (the last of which came in this championship, at Club de Campo, back in 1995) on his home circuit remains a record, needed 49 attempts to reach five. Rahm also moved past Open champion Shane Lowry at the top of the Race to Dubai rankings. The last Spaniard to win the Harry Vardon Trophy awarded to the man in first place at the end of the season was Ballesteros back in 1991.

RELATED: This Jon Rahm stare down would get him suspended at least one year from the Korean Tour

“In front of a home crowd, it’s always really hard for me to keep everything under control and to play the weekend that I did for them, it’s always really fun,” said Rahm, who plays most of his golf on the PGA Tour. “I can’t wait to come back next year and hopefully do it three times. It was unlike anything else. Spanish crowds love golf, they love us coming back. It’s hard to believe how many people come out here.”

In truth, only a fast finish by Cabrera-Bello prevented an even more convincing triumph. With six holes to play the gap between the eventual winner and runner-up was 10 shots. Five birdies from the World No. 38 restored some sort of respectability to the final margin, but needless to say the result was never in doubt.

It continues an impressive 2019 season for Rahm who has started in 23 events worldwide and has won twice, had eight top-five finishes, 15 top-15s and have finished inside the top 15 in every start except last week’s Alfred Dunhill Links Championship since June’s U.S. Open.

Still, apart from Rahm, the man most pleased with his week’s work in the Spanish capital had to be Del Val. The World No. 1,413’s check for $102,000 was more than 10 times his career earnings in four previous European Tour starts.