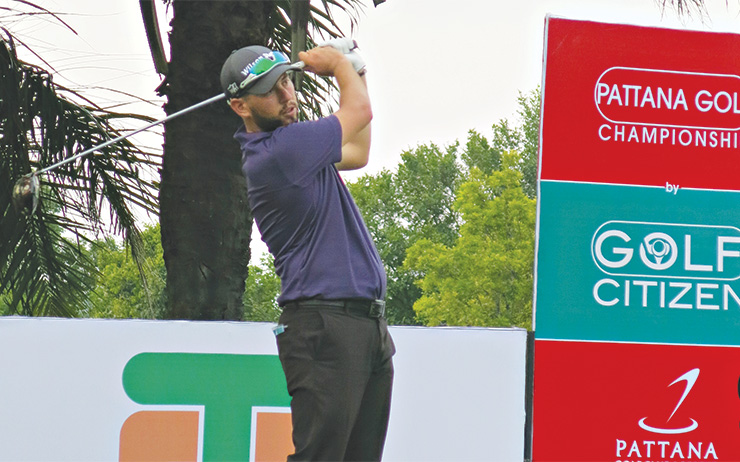 It was worth the wait, at least for Jose Ignacio Marin Casado.

After two rained out days and several frustrating false starts in between, the inaugural Pattana Golf Championship finally got underway in Thailand Thursday and the Spaniard made up for lost time with a sizzling eight-under 64.

It will see Casado take a two shot lead over Thai Nakul Vichitryuthasastr into Friday’s final round with the MENA Golf Tour’s first ever 72-hole tournament to be decided over 36-holes, whether permitting.

Starting on Pattana Golf Club & Resort’s 10th tee, Casado jumped out of the blocks with an impressive six successive birdies from the 11th.

“It was an amazing round with nine birdies. My putting was crazy as I made six birdies from holes 11-16 and another three on the front nine,” the Spaniard said.

“This is my first year playing on the MENA Tour and I am really enjoying the atmosphere as there is a tremendous sense of camaraderie among the players.”

That mightn’t last if Casado continues to wield such a hot putter although Vichitryuthasastr went bogey free Thursday and looks a threat. The experienced Thai also lit up the back nine with five birdies before picking up another shot on the 1st to stay in contention for a maiden MENA Tour title.

‘Played a good, solid round. I had an early start and benefited from the lack of wind,” said Vichitryuthasastr who turned professional in 2006 after an impressive amateur career which saw him represent Thailand in the Putra Cup and the Eisenhower Trophy.

“I drove the ball really well which gave me enough chances to hit greens,” said the Bangaluru native, who won a Professional Golf Tour of India’s event in Dhaka in March.

“It was a bit waterlogged in a few places, but it’s our duty as players to adjust to the course. The greens were surprisingly really quick and it caught me off guard on a few holes, but I was able to salvage pars.”

Elsewhere, European Tour regular Prom Meesawat returned a 70 to move into a 16-way tie for 16th along with England’s Zane Scotland and Luke Joy, who finished runner-up at last week’s Mountain Creek Open by Golf Citizen.

Brazil’s Dubai-based prodigy Tiago Lobo mixed five birdies with an eagle and four bogeys to lead the amateur division on a 69, three shots ahead of fast-improving Indian star Arkesh Bhatia, who is also based in Dubai.

The cut was made at level-par 72 with 58 professionals and seven amateurs making it to the final round. English cricketer-turned-golfer Craig Kieswetter (73) was among the notables who missed out on the halfway mark.