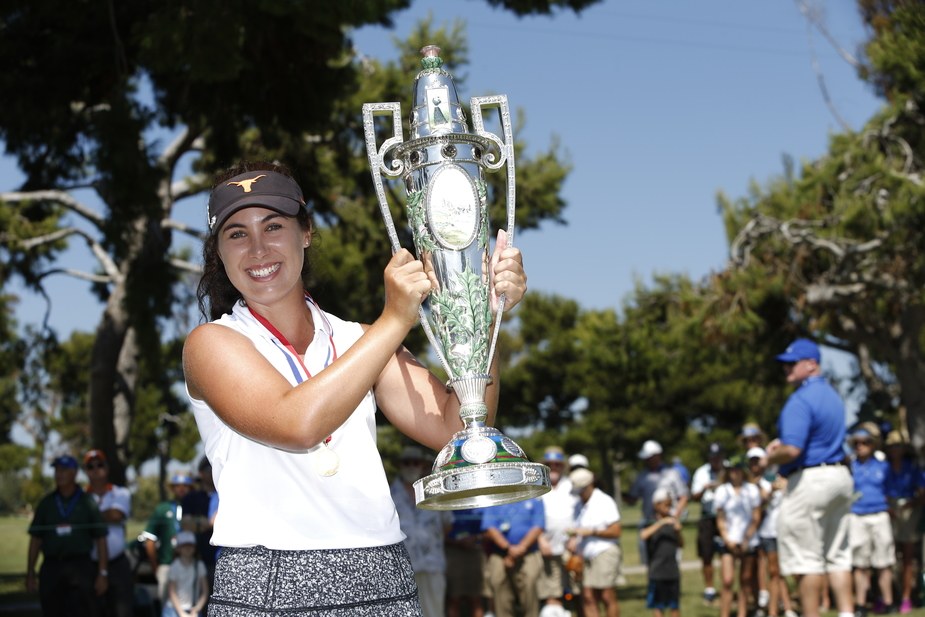 Sophia Schubert was not yet four when her mother took her down to Fairways and Greens Golf Center in Knoxville, Tenn., to learn a game that would allow her to enjoy time with her father.

“I remember her always with a bright little grin on her face that also reached her eyes and lit them up as well,” her instructor Nicole Weller said. “Just a happy golfing girl with that classic curly-hair ponytail, who was always giggling while having a good time at the course or range. Think she started out with the Snoopy clubs and always had great balance and a silky smooth swing.”

Only her equipment has changed. Schubert is still giggling, still grinning, and on Sunday at San Diego Country Club she had as good a time as she likely has ever had on a golf course.

Schubert, 21, a University of Texas senior, won the U.S. Women’s Amateur in a dominant manner, defeating Albane Valenzuela of Switzerland, 6 & 5, in the 36-hole final.

She birdied the first hole, was 4 up through the first 18, never trailed and lost only a single hole to Valenzuela, a Stanford sophomore, who is third in the World Amateur Golf Ranking. Schubert made five birdies, the last of them by holing a 25-foot downhill left-to-right putt from the rough behind the green at the par-3 11th hole, the 29th of the match.

“It was really hard,” she said. “I felt I should chip it, but he [caddie Ryan Murphy, also her coach at Texas] told me to putt it. It went through the grass pretty smoothly. I thought this is it. I figured I would win it then.

“I worked so had for this. To win it is just incredible.”

The only hole that Valenzuela won came when she hit her approach to two feet at No. 1 in the afternoon, following a two-hour break for lunch. Whatever momentum she might have had was extinguished quickly when she missed a 10-footer at No. 2.

“It was one of those days when I couldn’t make the putts,” she said. “I had good reads and good looks, but just couldn’t make them. It wasn’t my day. It happens. It’s golf. I played some great golf, but it didn’t go my way today. It was great to win five matches in my first year in the Amateur.”

Moments after Valenzuela missed a short par putt at 13, Schubert holed her three-foot par putt to win. She thought she would cry, but tears didn’t come. “I’ll probably cry later,” she said. Probably when she makes that first phone call, to her father Bill.

In an ironic twist, Bill, the reason her mother introduced her to the game to spend time with him, was not there to witness this her finest hour. He was still at home in Tennessee, watching on television. A home builder, he stayed behind to tend to business, though he was tempted to board a plane on Saturday night. The family decided against it.

“He didn’t want to mess up my mojo,” Schubert said, giggling the giggle and grinning the grin that Weller, now the head teaching pro at the Landings Club in Savannah, Ga., still remembers all these years later.

“She just seemed to love playing and had no fear,” Weller said. “Never seemed to be a part of the politics of golf around her. She just wanted to play and be challenged.”