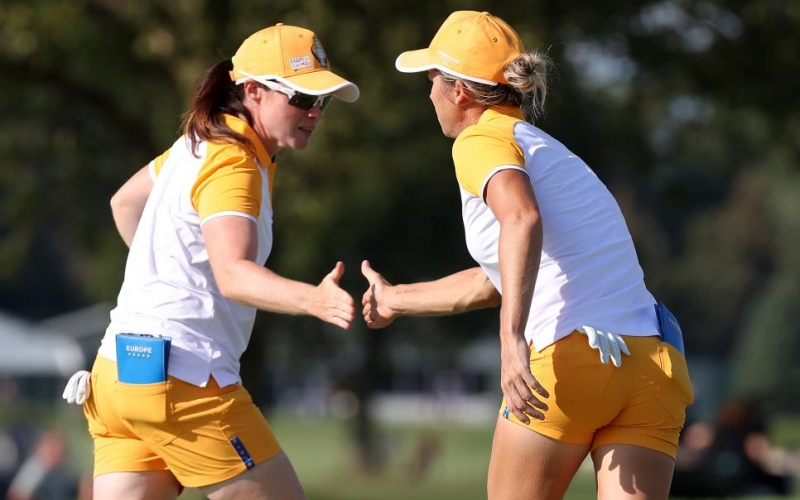 Gregory Shamus
TOLEDO, OHIO – SEPTEMBER 05: Mel Reid of Team Europe and Leona Maguire of Team Europe react on the 16th hole during the Fourball Match on day two of the Solheim Cup at the Inverness Club on September 05, 2021, in Toledo, Ohio. (Photo by Gregory Shamus/Getty Images)

By Keely Levins
On paper, Team USA looked to be the stronger of the teams at the 2021 Solheim Cup at Inverness. But after two days of competition, they trail the Europeans, 9-7, with 12 points to be had on Sunday during the singles matches.

Team Europe needs only to get to 14 points to retain the cup, which they won in dramatic fashion at Gleneagles in 2019. Here are the pairings for Monday’s matches:

12:05 pm Anna Nordqvist vs. Lexi Thompson
Fresh off her major victory at the AIG Women’s Open, Nordqvist has been strong at the Solheim Cup, winning two of the three matches she’s played in. This pairing had one of the most intense singles matches in Solheim Cup history in 2017 in Des Moines. That year, their match ended all square. 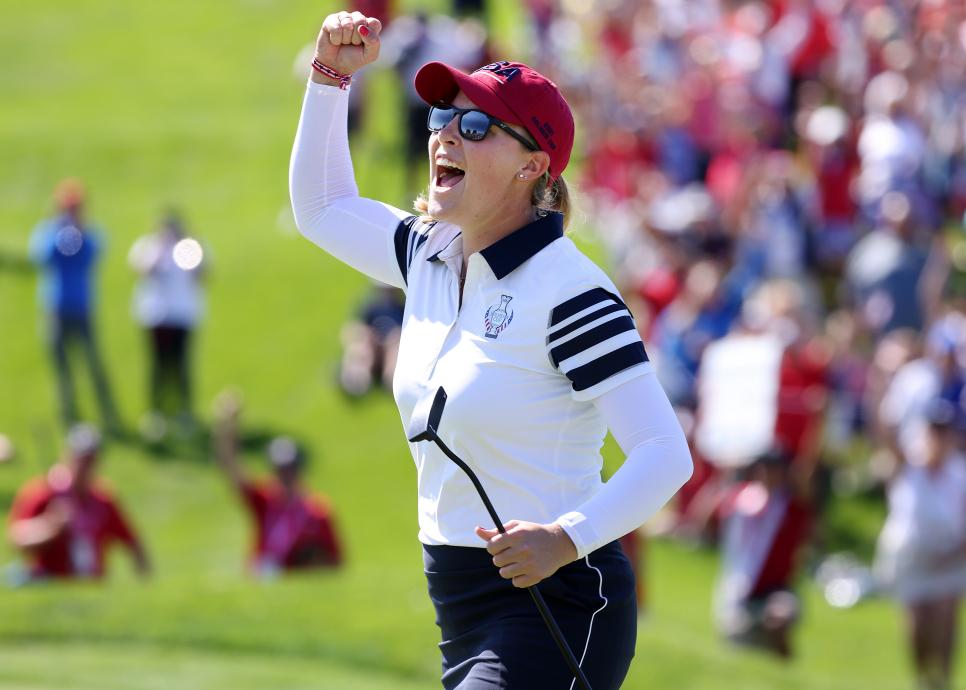 Sagstrom was involved in a rules situation on Saturday, when she picked up Nelly Korda’s ball which was perched on the lip of the cup. She waited three seconds instead of the allotted 10, which led to Team Europe losing the hole and then the match, 1-up. Korda’s partner in that match: Ally Ewing. Tension was high in the group after the ruling. It will be interesting to see if it will linger into this match on Monday.

12:25 pm Leona Maguire vs. Jennifer Kupcho
These two Solheim Cup rookies have been bright spots for both of their respective teams in their first playing of the event. They played against each other in afternoon fourball on Sunday, with Maguire dropping a big putt on 16 and Kupcho answering with a chip-in on 17. Look for similar fireworks on Monday.

12:35 pm Georgia Hall vs. Nelly Korda
Nelly Korda is the No. 1 player in the world, but she has only scored one point for Team USA. Hall played the first three matches and scored 1½ points. Both players sat Sunday afternoon, so should be fresh for Monday’s contest.

12:55 pm Nanna Koerstz Madsen vs. Austin Ernst
Koerstz Madsen, a Solheim rookie, enters her singles match fresh off a fourball win. Ernst has played in three matches, winning one and losing the other two.

1:05 pm Matilda Castren vs. Lizette Salas
Castren is the first woman from Finland to play in the Solheim Cup. She was paired with Nordqvist in a match against Salas and Kuchpo, where Team USA won the match 3&1.

1:15 pm Carlota Ciganda vs. Brittany Altomare
Ciganda has played twice, winning one match and losing the other. In her singles match in 2019, Altomare won her singles match 5&4 over Jodi Ewart Shadoff. Team USA could certainly use a performance like that out of Altomare again.

1:25 pm Sophia Popov vs. Megan Khang
Both players are likely going into this match with something to prove: Khang has scored half a point for Team USA and Popov has yet to score a point for Team Europe.

1:35 pm Mel Reid vs. Yealimi Noh
Reid has been strong in each of her matches this Solheim Cup, winning 2½ points for Team Europe. Noh is playing in her first Solheim Cup.

1:45 pm Charley Hull vs. Jessica Korda
Korda has played two matches and lost both, while Hull has won two of her three matches. The two players both average more than 265 yards off the tee, which will make for a powerful match to watch.

1: 55 pm Emily Pedersen vs. Danielle Kang
Pedersen and Kang met in Sunday’s fourball match, where Pedersen and her partner Charley Hull came away victorious. But Kang thrives off the energy of the large Solheim Cup crowds. Who better to bat cleanup for Team USA?

Solheim Cup 2021: How this LPGA veteran went from broke to playing for Team USA