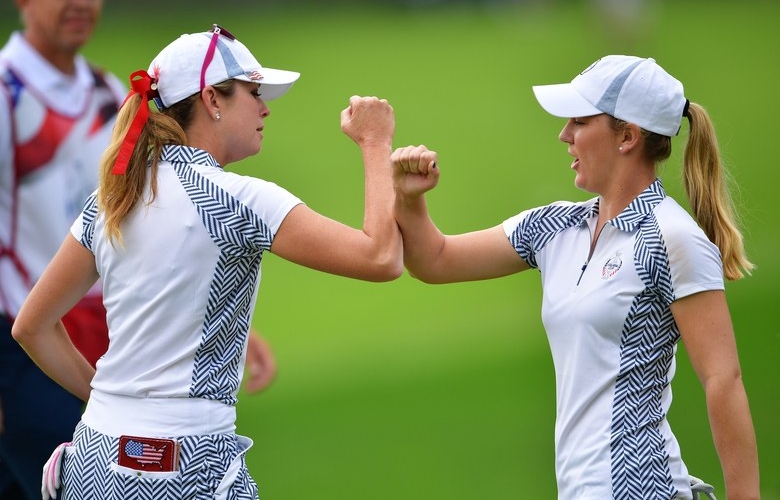 By Keely Levins
Another dominant afternoon for the American side on Saturday has turned the 2017 Solheim Cup into a potential rout for the U.S. team.

With two days of competition complete at Des Moines Golf & Country Club, the home side has a daunting five-point lead over the Europeans. After a 2-2 split of Saturday morning matches (an improvement on the morning before for the Americans), Captain Juli Inkster’s crew claimed three of the four afternoon four-ball points to grab a 10½-5½ edge heading into the Sunday singles matches. The U.S. needs just 3½ out of 12 points on Sunday to retain the cup.

The first U.S. afternoon duo in was Brittany Lang and Brittany Lincicome. The Brittanys—aka the Killer Bs—made nine birdies and an eagle combined, shooting the stroke-play equivalent of eight under through seven holes. Even so, Europeans Mel Reid and Carlota Ciganda put up a good fight, making plenty of birdies as well and taking the match to the 18th, before the Brittanys ultimately won 2-up.

The second match was the only one the Team Europe won in the afternoon. Jodi Ewart Shadoff and Anna Nordqvist defeated Lizette Salas and Angel Yin, 4 and 2. Nordqvist has been on of the lone bright spots for Europe despite the fact she is one of a couple players on Annika Sorenstam’s tream not at full-health. Nordqvist has been battling mononucleosis for the past few weeks, and Sorenstam didn’t want to play her both sessions on Saturday. But with Suzann Pettersen out with a slipped disc and Solheim Cup stand-out Charley Hull sitting out all of Saturday to rest a wrist injury, plus the Europeans desperately in need of points, there wasn’t much of an option. In turn, Nordqvist played, and impressive won both of her matches Saturday. 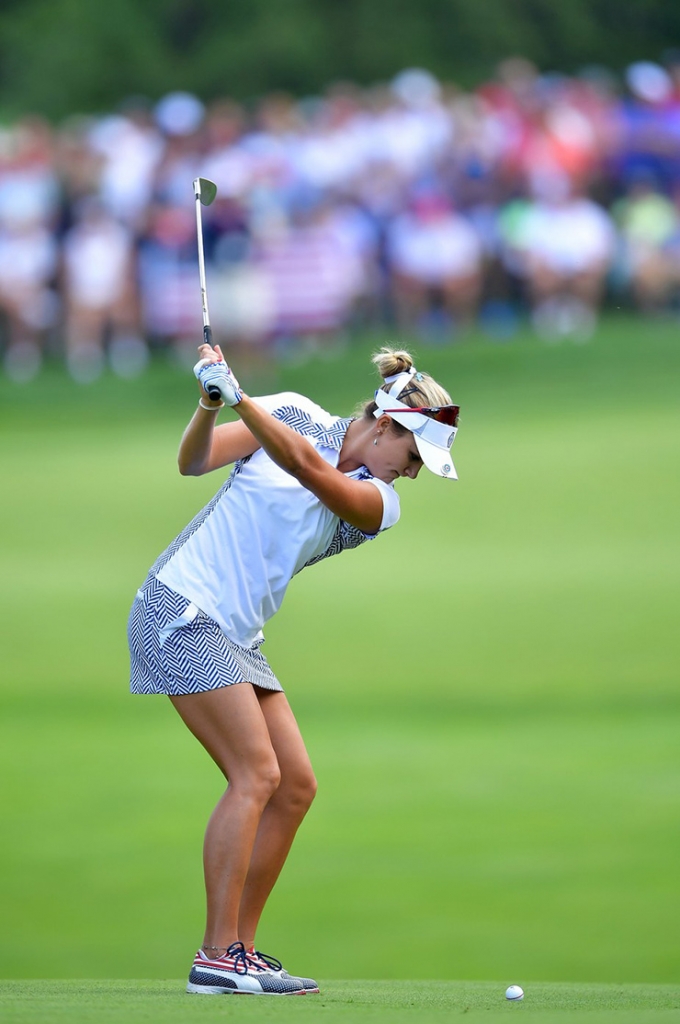 The formidable duo of Lexi Thompson and Cristie Kerr put the next point on the board for the Americans after defeating Georgia Hall and Catriona Matthew, 4 and 2. Hall, a rookie, has been impressive in each of her matches the past two days. Matthew showed up to the Solheim Cup as an assistant captain. After Pettersen withdrew, she was put on to the rosters as an alternate. But the duo could never get the lead against Kerr and Thompson. Kerr, playing in her ninth Solheim Cup, won both her morning and her afternoon matches with Thompson on Saturday. That improved career points total in Solheim play to 20, a new American record.

Paula Creamer and Austin Ernst won the anchor match, 2 and 1, over Karine Icher and Madelene Sagstrom. Seven team birdies, an eagle, a chip in, and a near hole-in-one were celebrated with a choreographed hand shake and plenty of improvised celebrations by the American pair. Inkster named Ernst to the team as a captain’s pick and Creamer made the team as an alternate after Jessica Korda withdrew before the competition began due to injury.

A five-shot lead is a comfortable one, but not necessarily insurmountable. All Inkster and Sorenstam have to do is point to the 2015 competition, when the Americans trailed 10-6 entering Sunday singles, only to rally and win in Germany in the biggest comeback in Solheim Cup history. They’ve proven almost anything can happen. And that story will serve as motivation for both sides.

“We’re going to play like we’re behind or tied,” said Lang.

“Gas pedal down,” said Lincicome. “We’re going to try to get as many points as we possibly can. I feel like the hardest part is closing it out.”

Indeed, Inkster was happy to hear from her team—in which all 12 members have won at least one match already—that complacency wouldn’t seem to be an issue come Sunday.

“I just love where my players’ heads are at right now,” Inkster said. “They know – they haven’t said one thing in the locker room. They just were just all putting the team, the lineup together and asking everybody where they would like to fall, where they felt comfortable. And they know that it’s like game seven of any playoff, that’s the hardest game to win, is to advance.”