Writing golf for a living is a gig, as you’d imagine, that comes with some fairly decent perks. But this was a privilege like never before – a round on a layout so new there was not a divot, a single pitch mark or even another player to be found anywhere.

Indeed, Golf Digest Middle East savoured every moment (if not every one of the many shots) during an exclusive loop of Trump International Golf Club Dubai earlier this week.

We report this not to gloat but to implore readers to enter our competition to win three places in one of the very first fourballs set to play the latest collaboration between Donald Trump and Gil Hanse, the acclaimed Rio Olympics course architect. Take it from us, you won’t regret paying the green fees here, never mind scoring a freebie.

Played in the company of new head pro Sven Nielsen, a young South African headhunted from another of the U.S. President Elect’s golf properties, Trump Turnberry in Scotland, this weeks round was technically “work”.

As well as being a prelude to a full review in the February issue of Golf Digest Middle East, it was also a reconnaissance mission to ensure our competition winners don’t get lost with the fourth spot in the aforementioned fourball reserved for the not unhappy new editor.

Okay, who are we trying to kid. The truth is this was pure, unadulterated pleasure despite the lousy golf on a course thus far played by a lucky few, former European Ryder Cup captain Darren Clarke and two-time Dubai Desert Classic champion Stephen Gallacher among them.

You’ll have to wait until February for our detailed verdict but needless to say, Hanse has achieved exactly what he set out to do with Trump Dubai. 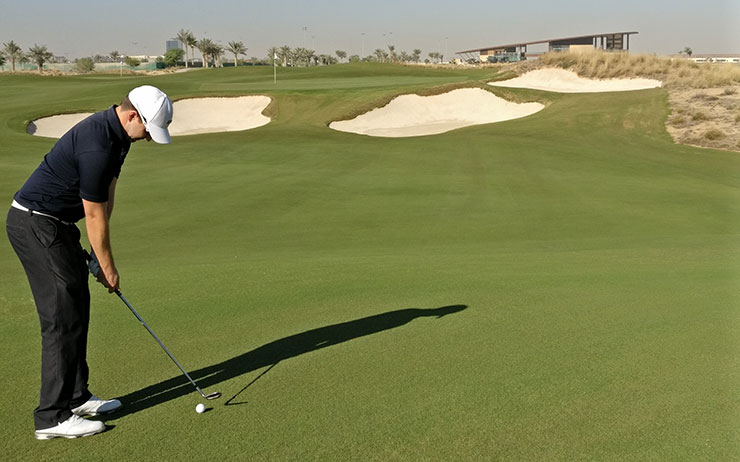 “If we can build courses that are perceived to be fun and actually are fun, that’s a great accomplishment,” Hanse told Golf Digest Middle East during a pre-Christmas interview which features in our January issue.

Mission accomplished. The greatest compliment the editor can pay Hanse is to say he wanted to go straight back out despite his golf being more turvy than topsy (his fault, not the architects).

Hanse has somehow melded an eminently playable course into a major real estate backdrop, generous fairways, few bunkers and no discernable rough sure to keep even the highest of handicappers engaged.

The real joy – aside from the rustic, links-style aesthetics, pristine playing surfaces and a majestic clubhouse for the post round debrief – is found around the greens where every shot in your short game arsenal will be tested. Some truly gnarly recoveries await if you miss the greens, believe us, and particularly if you short side yourself.

There’s honestly not a poor hole among the 18 (we can’t wait to try the par 3 academy course now) and so many truly memorable ones, but more detail later. For now, grasp your chance to play one of the first rounds at The Trump International Golf Club Dubai with two friends and the giddy author.

Answer the simple question below and fill in your details before January 25, 2017, for your chance to win.

Stay tuned for full details of opening dates and rates as well. This is a course that should definitely be on your must-play list for 2017.

WIN! Here’s your chance to tee it up in the OMEGA Dubai Moonlight Classic