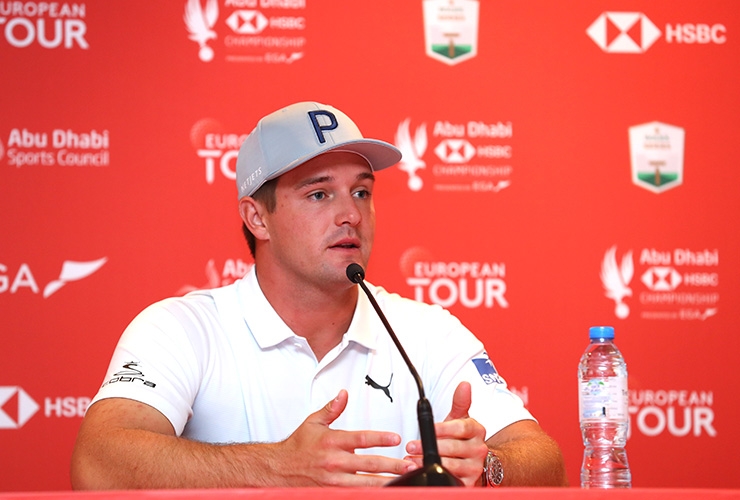 Starting at this week’s Abu Dhabi HSBC Championship, players will be penalised a stroke if they violate the European Tour’s new ‘bad times’ code twice in any one tournament.

Koepka, the No.1 player on the planet and the world’s highest-profile anti-slow-play crusader, welcomed the move at his pre-tournament presser.

“Yeah, I think it’s a good thing. I think the game’s changing and I think the rules need to kind of change with it,” the four-time major champion said.

“I think that’s why you’ve seen so many different rule changes, equipment changes, things like that going on. You know, it’s got to evolve as we evolve, the courses evolve and technology, everything like that.

“They are trying to make the game a lot simpler, and I think making these changes is, you know, we’re on our way to making it easier to understand for the fans at home, the players. It’s very clear-cut what’s going to happen and very clear-cut what you need to do. I think when everybody knows the rules, it’s a lot easier.”

DeChambeau has been golf’s bully-boy when it comes to slow play, much of the criticism justified even if the golf scientist still feels he gets a bad rap at times. Koepka and DeChambeau traded verbal blows on the subject on both the range and in the media last year but DeChambeau insists he’s on board with the new regulations.

“I love it. I love it,” DeChambeau said of the new four-point European Tour plan to combat slow play before engaging in little self-defence.

“I told you guys, even back at — on the PGA Tour, when stuff was happening, I told you guys, I welcome it. I was playing under the rules and there was no rhyme or reason to be called out, other than the fact that it looked like it was a really, really long time that it took [to play shots], and it was, absolutely. I’m not saying it wasn’t.

“But I was playing under the rules at that point in time, and there’s no reason or why I should have been given so much heat, considering other things that had occurred that day and previous days of other people that I played with and other things that occurred. It’s just .01 per cent of the time that that happens on Tour, which it happens literally with everybody out there. They just caught it on camera at that specific moment in time.

“You know there, was no time assessed, there was nothing that occurred and I played under the rules. To be called out like that was kind of weird, but it is what it is and I take it and I understand it.”

The European Tour originally planned to penalise players a stroke for two time violations in a round. DeChambeau doesn’t mind that has been upgraded to two warnings throughout the duration of any one tournament.

“Is that a good thing? Absolutely. Look, I don’t want to be out there for six hours, nor does anybody, right. And there’s numerous times out there, more than not, I’m waiting — our group is waiting for people to go, and so I certainly don’t want to be waiting on players. It’s going to hurt my momentum. Every time it happens, I feel like I get cold,” DeChambeau said.

“So yeah, absolutely. I don’t want that to happen to people behind me or in front of me. There’s a lot of things that happen during the course of a golf round. People don’t just hit in the middle of the fairway or on the green all the time. You have situations that occur.

“Taking that into account, which I think they have done beautifully, it is a good thing. Having the, hey, can I get 40 more seconds because this is a weird shot, the wind came up, or something happened, I think that’s great. I think what they did there is awesome.”