The Gulf Club
Golfers in hot form around the Middle East 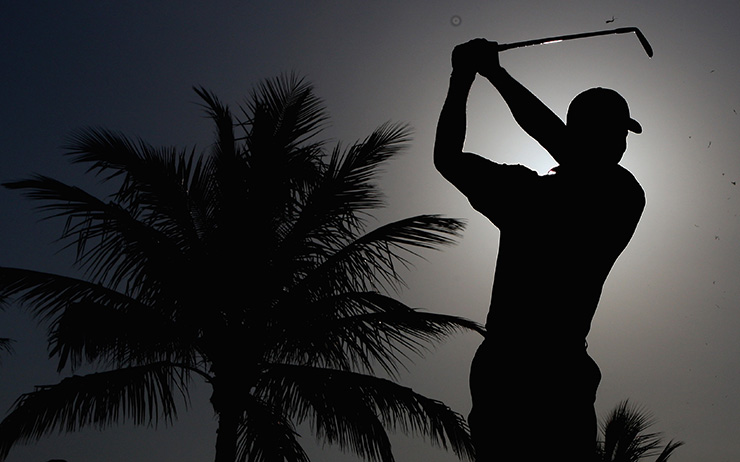 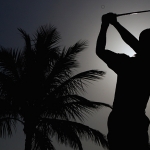 Rest assured we’re as committed as ever to covering your big win in the monthly medal. It’s just this content now has a more immediate home online.

It’s the start of a fresh take on the region’s best players, tournaments and most influential characters in print and online.
The best part? Now you can now share and tag friends and family in on your success where ever they are around the globe. 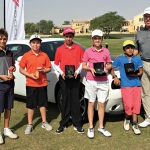 Al Ain Golf, Equestrian and Shooting Club’s Daniel Whittaker won the fourth event of the Dodge Challenger Junior Series with an impressive two-under-par 25 on Arabian Ranches Par 3 course. Whittaker was a shot clear of new order of merit leader Victor Charpentier.  The under-11’s section was won by Zak Rafique whose score of 29 resulted in a winning net total of 20. In the under-16’s division, fellow Arabian Ranches’ member Luke Machen improved on his December score by five shots to post a gross 39, net 23. Nearest the Pin prizes went to Cameron McLeod (hole 3) and Charpentier (hole 5) with the Dodge Challenger Hole in One Challenge on the 9th remaining illusive despite a great effort to just a couple of feet from Matteo Sorcinelli. 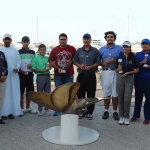 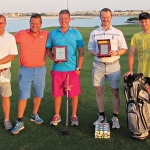 Tero Kilepela wasn’t about to let a 10 on his card (scored on the par 5 3rd) ruin his day at The New Years Cup. Kilepela still managed 17 points on the outward nine en-route to a winning 38 points. He still needed a bit of luck, pipping Callum Bird on a countback after Bird also recorded 38 points. James Littlewood was third with 37 points. 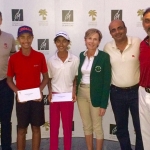 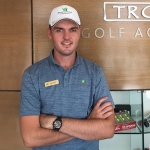 Pretoria born-and-raised PGA teaching professional Zander Potgieter has joined the Academy team at The Royal Golf Club in Bahrain. Though he hails from South Africa, Potgieter spent five formative teenage years living in Saudi Arabia during so is no stranger to the Middle East. He started playing golf at the age of 10 after watching South African legend Ernie Els on TV. By the age of 13 he was selected for the Gauteng North provincial side and went on to pursue a career in golf, graduating with a diploma in Club Professional Golfing and Management. Zander completed his apprenticeship at the prestigious Pinnacle Point Estate in South Africa and graduated with the PGA of South Africa as a full member in 2016. 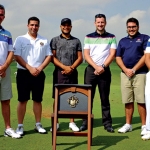 The UAE national team put Trump International Golf Club Dubai to an exclusive pre-opening test. Top senior players were joined by coaching staff and board members from the EGF on the new Gil Hanse design. Khalid Mubarak Al Shamsi, EGF Secretary General, said: “The course and golf facilities exceed expectations and will perfectly fit with the quality of golf clubs within the UAE. “With forgiving fairways and tough undulating greens, this golf course will be a great test for any golfer. The EGF will be looking forward to working with Trump International Golf Club, Dubai and will be excited to welcome their new members into the UAE golf community.” 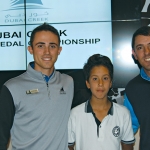 Jacobo Fisas, who won with a net score of 33.5, is flanked by Michael Major (Golf Operations Executive) and Jack Woods (Golf Professional). Aashaka Desai won the gross title with a 38 while Samuel De Souza (37.5) and Hyeonji Kang (34.5) won the boys’ and girls’ net titles. EGF national team player of the year Reema Al Heloo won the non-members competition with a net 34. 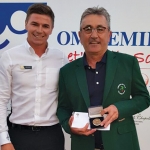 Vice captain Ivan Fornazaric got 2017 off to a flying start with victory in the January medal, supported by Porsche Centre Dubai, courtesy of a net 73 on the Majlis. Fornazaric pipped Bipin Bhatia with a better back nine score score to claim 17,000 Skywards miles kindly donated by Emirates Airlines. Bhatia claimed victory in the A division, ahead of Boyd Edmondson who shot a net 75 and whose better final three holes saw him edge Anil Shivanna on countback. Fornazaric also topped the B division ahead of David Moody and Ronnie Pegna. Mohit Khatwani won the C grade with a net 79 while David Voller’s 80 claimed the gross prize. 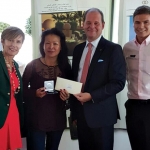 Sandra Chia’s net 66 won the day and Silver B division by four strokes from Elise Hanson. Fiona Berry won the Silver A division with a net 68, four clear of Veronica Elias (net 72). In the Bronze division, Margaret Breen topped her division for the second month in succession with a net 72. Kavita Sehmi claimed the gross prize in style with a two-under par 70. 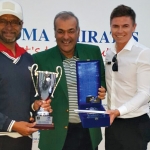 Dubai Creek member Mohammed Al Musharrekh scored a net 70 on the Majlis to win the OMA Emirates 2016 Medal Championship Grand Final at Emirates Golf Club. Musharrekh held off EGC member Marcus Wallman by a shot with EGC menb’s captain third after a net 72 while Dubai Creek’s Edoardo Galeppini shot a 75 to win the gross prize. The final pitted the top 36 place getters in the season long qualifying events at Dubai Golf’s two UAE clubs, EGC and Dubai Creek. Joe Smith from EGC and Ashok Sindhu at The Creek were their respective order of merit winners. 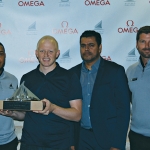 Dubai Creek member Max Burrow carded rounds of 67-73 for a two under par aggregate of 140 and victory in the Omega Men’s Amateur Open. Burrow beat Martin Fernandez (74-71) by five strokes with with two-time defending champion Bayhaan Lakdawala third on 146 (73-73). The final day produced a ding-dong battle between Burrow and Lakdawala with the latter drawing level on the 11th. Barrow edged out to a three stroke lead with birdies on 14 and 15 but a bogey on the par 3 16th gave Lakdawala hope at just two back. But a poor tee shot on 17 lead to a double for Lakdawala while a birdie for Burrow made things safe with a five shot lead going p the last. Bilal Belaid won the net title with a 143 total after rounds of 70-73, a shot clear of Stephen Clarke. 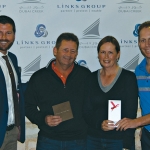 Warren Panting and the 2016 Lady Captain Vanessa North scored 40 points in windy conditions to win the fourth event of the monthly Links Group Pairs and qualify for the pairs betterball stableford event’s grand final in May. Edoardo and Beatrice Galeppina finished second on a countback from Tejan Fadle-Deen and Jamel Shallop after both scored 39 points. 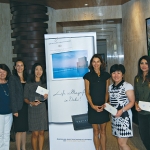 Kiyono Taniuchi celebrated her birthday with victory in the first Sofitel Ladies Stroke Play event of 2017. And some birthday it was with a 10-under par net score of 61. Elizabeth Agha claimed the division A title after a round of 70 and also collected the nearest the pin in 2 prize on the 11th. Shiba Khan claimed top honors in division B with a score of 65, as well as claiming the longest drive prize on the 4th. Lilian Yee and Paula Savage were nearest the pin winners on the 8th and 14th respectively. 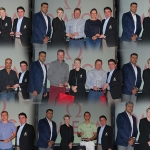 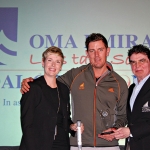 Scratch team member Tobias Parkin won the January medal after a fine score of four-under 67. Mark Jolliffe won division A from Adonis Nasr on countback with a superb back nine of three under par (net) while men’s captain Mansour Khodjasteh stormed division B by three shots after a net 69. Junior Adam Savage won the best gross with a 74 thanks to a back nine countback from Adonis Nasr while Navneet Chopra claimed the senior’s division with net 77. Kristi Sealey scored a net 75 to scoop the ladies division.

Mark Burrell, from Links Hope Island GC in Australia, won the 28th Omega Emirates Amateur Open by a stroke from Christopher Rahm (Jumeirah Golf Estates). The Australian earned an start in October’s European Challenge Tour event, Ras Al Khaimah 2017 Golf Challenge, courtesy of his winning 148 aggregate on the Faldo and Majlis courses. Thomas Strandemo, representing the United States Golf Association, was third on 150. Burrell trailed by six strokes after day one, having opened with a six over par 78 on The Faldo. However, he rallied with a two under par 70 on the Majlis, finishing with back to back birdies to claim the top prize. Emirates GC’s Laurent Truquet won the net with scores of 74 and 68 for a 142 total, eight clear of Sidney De Souza (EGF) with a score of 150 who pipped JGE’s Dean Wilkinson on a countback. 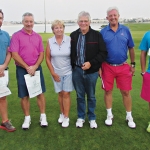 The seemingly unstoppable father and son duo of Tim and Callum Bird recorded victory in the inaugural Al Hamra Extreme Pairs. The event saw pairs play holes 1-6 under greensomes conditions, holes 7-12 as betterball, and the final six holes as a scramble. The Bird’s, regular winners at the RAK club this season, carded 22, 19, and 24 for a 65 total and a two shot win over Travis Sandal and Hamish White. Third were David Wonfor and Ryan Glynn who carded 23, 21, and 24 for a 68 total. 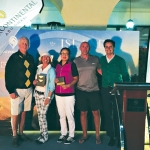