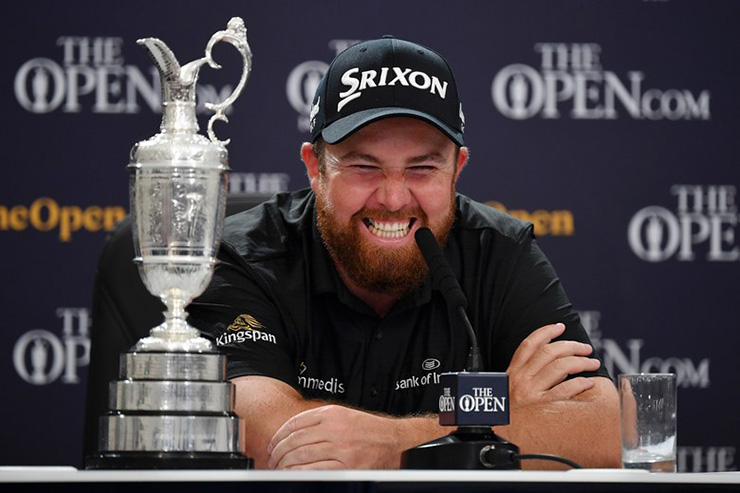 PORTRUSH, NORTHERN IRELAND – JULY 21: Open Champion Shane Lowry of Ireland talks in a press conference after the final round of the 148th Open Championship held on the Dunluce Links at Royal Portrush Golf Club on July 21, 2019, in Portrush, United Kingdom. (Photo by Stuart Franklin/Getty Images)

By Christopher Powers
It’s a phrase golf broadcasters have uttered hundreds of times before: “This win is a life-changer!” Usually, it’s reserved for first-time major winners, but with the amount of money they’re playing for on the PGA Tour every week, they’re all life-changers for first-time tour winners.

But maiden major wins are a different level of life-changing, something Shane Lowry has found out in the weeks since his Open Championship victory at Royal Portrush. Though Lowry believes his life hasn’t changed all that much, which is exactly what you’d expect to hear from him. The only thing he could think of was how fans this week at Liberty National recognize him as Shane Lowry, and not two of his doppelgangers. Allow the Champion Golfer of the Year to explain.

“Yeah, look, it’s changed my life a little bit,” Lowry said. “I’m definitely more recognized now, and even coming over here to events, but if anything when you’re like that, it makes you feel more comfortable. That’s the way I feel, anyway. They’re not calling me Beef or they’re not calling me J.B. Holmes out there, anyway. That’s a plus.”

Apparently, golf fans think all heavyset pros with beards are all the same guy.

The Irishman’s life has changed in other ways, too.

“The support I’ve got back home has just been incredible. I haven’t really sat back and thought about it a lot but what I feel. Hopefully it’s going to a little bit more in November in Ireland and hopefully, it’s going to get kids playing the game. It does feel like it has had that effect a little bit over the last few weeks, and hopefully, I can move forward and become more successful, as well, and make kids want to start playing golf, too.”

Note to golf fans: Make sure you know the name of the guy you’re yelling at before you start yelling at him.