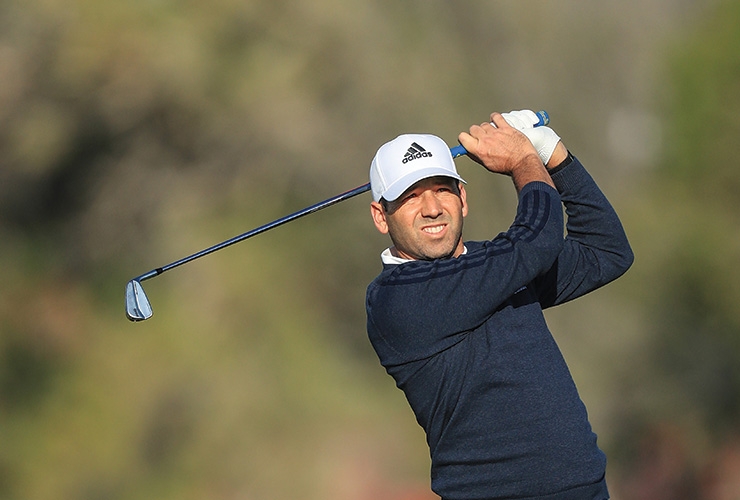 David Cannon/Getty Images
Garcia plays his second shot on the 14th hole during the first round of the Abu Dhabi HSBC Championship at Abu Dhabi Golf Club on January 16, 2020,

A five-under 67 sees the former Masters champion in a six-way tie for fifth heading into Friday’s second round at the Abu Dhabi HSBC Championship presented by EGA.

The 40-year-old enjoys his position on the first page of the leaderboard with, among others, fellow former Dubai Desert Classic winners Rafa Cabrera Bello and Haotong Li. It seems he’s just as comfortable with his new Ping driver, Blueprint irons, Glide 3.0 wedges and an Anser-style putter.

Garcia caused the first big equipment stir of 2020 when it emerged he had parted company with Callaway on the eve of this week’s $7 million Rolex Series event. He’d signed a deal to play Callaway woods, irons and wedges, the company’s Chrome Soft balls and an Odyssey putter in 2018 after a 15 year stint with TaylorMade; interestingly he was spotted with a TaylorMade SiM fairway metal yesterday.

He insisted there was no animosity over the Callaway split.

“Unfortunately I wasn’t comfortable enough with the [Chrome Soft] golf ball, and they needed me to play it. You know, we decided to kind of part ways. Nicely, though, so there was no bad feelings from any part or any side which was great,” Garcia said.

“I’m fairly comfortable. I had some good practice sessions throughout Christmas and New Years. It’s  just a matter of kind of getting a bit more used to it [the new equipment] as the year goes on, but for the most part, you know, it feels quite good and I’m happy the way it went today.”

Why not after a round only marred by a bogey on the 9th, his final hole after starting on the 10th.

“Obviously I would love to par the last but unfortunately that didn’t happen, just a little unfortunate on the last that that pitch bounced on that pitch mark and just died. Other than that, I felt like I played pretty solid. Hit a good amount of shots, good, solid shots, a couple here and there that I didn’t quite commit as well as I should have.”

After winning the Desert Classic in 2017 before going on to claim the green jacket, Garcia clearly has desert pedigree. He wasn’t getting ahead of himself on Thursday but is happy to get the new year off to a fast start.

“I can’t put my hand on it or I can’t tell you exactly why, but I’ve always enjoyed the desert. It feels like you can hit different kind of shots. Usually I’m fairly good in the wind, and usually it gets a little breezy here, so that kind of helps my game a little bit.”