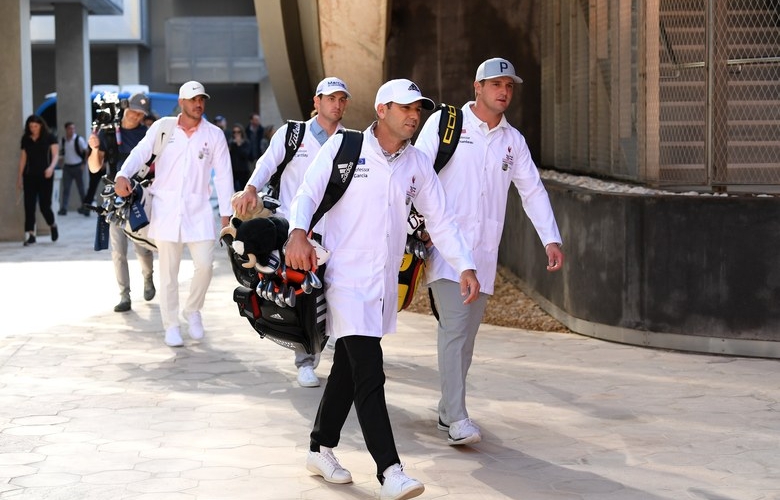 By Joel Beall
Sergio Garcia is making his 2020 debut this week at the Abu Dhabi HSBC Championship. And he will be doing so with new sticks in tow.

Photos from an event associated with the European Tour stop show Garcia without Callaway clubs in his bag, instead brandishing a set of Ping irons and wedges and a TaylorMade fairway headcover. In a statement to Golf Digest, Callaway said that it has split with the 2017 Masters champ.

“We can confirm Callaway did not renew its agreement with Sergio Garcia for the 2020 season,” a Callaway spokesperson said. “We parted on great terms and the option for Sergio to carry Callaway equipment in the future remains.”

Following a 15-year run with TaylorMade that culminated in the Spaniard winning his first major, Garcia signed a deal in 2018 to play Callaway woods, irons and wedges, the company’s Chrome Soft balls and an Odyssey putter. The results from this time frame were mixed. Garcia won three international tournaments in the past two years, but missed the cut in six of eight major appearances and struggled on the PGA Tour, failing to make the FedEx Cup Playoffs in 2018 and not advancing past the Northern Trust last season.

There was also a 2019 incident in Saudi Arabia where Garcia had an emotional outburst in a bunker, and more controversy at the WGC-Match Play involving a non-concession in a tilt against Matt Kuchar.

As for Garcia’s new clubs, Ping confirmed to Golf Digest that Garcia reached out to the company for equipment help. Some of the clubs Garcia will be using this week are the Ping Blueprint irons, Glide 3.0 wedges and an Anser-style putter.

There is at this moment, however, no Ping deal in place, according to Ping.