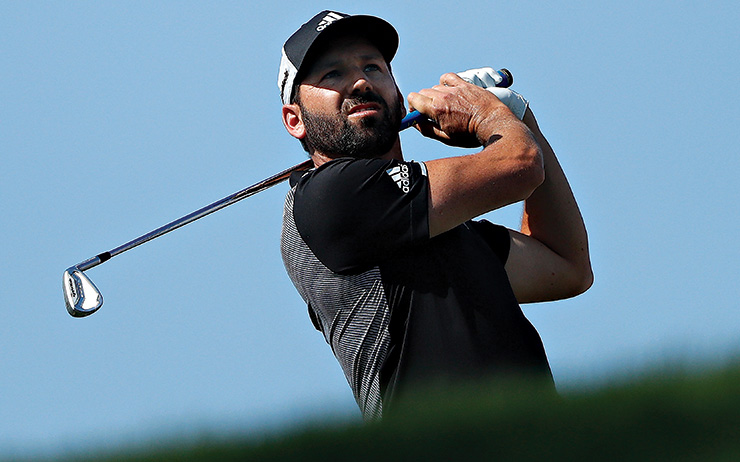 The 28th OMEGA Dubai Desert Classic is #MadeForGreatness. So far, so good for Sergio Garcia.

The 37-year-old Spaniard has given himself a shot at emulating idol Seve Ballesteros and becoming just the sixth wire-to-wire winner at Emirates Golf Club after putting in a big overtime shift on Moving Day Saturday.

Garcia rattled off 11 birdies in 31 holes as he extended his one-shot, first round lead Thursday to three by the end of the delayed second round at lunchtime yesterday, before maintaining the buffer just as the lights went out on an extraordinary Saturday.

The way the 32-year-old has negotiated 54 windswept holes on the Majlis – his scores of 65-67-68 highlighted by some particularly sparkling short game work – will give the Ryder Cupper great hope of going on to capture a 12th European Tour title and his first win since last May’s Byron Nelson Classic on the PGA Tour.

But with Open champion Henrik Stenson (68-68-67) lurking ominously just three back, Garcia knows there is a long way to go before he can think about backing up his last European triumph at the 2014 Qatar Masters.

Neither will Garcia have missed the name ‘Ian Poulter’, who shares third place with Thai Prom Meesawat at -11, on the front page of a leaderboard which promises an enthralling finish to the 2017 Desert Swing. Poulter may be five back but Garcia has been witness to far to many Ryder Cup birdie blitzes from the Englishman to discount him just yet.

Regarded as one of the best natural ball-strikers in the game, Garcia needed it on the 18th in almost complete darkness last night. He still managed to birdie the par 5, his fifth gain in a homeward nine of 33 strokes.

“At the end it was very, very dark, I’ll tell you that. I didn’t think, when we were walking on 17, I thought, well, it will probably be a little dark but it was not too bad,” Garcia said of negotiating his 54th hole towards the bright lights of the hospitality chalets.

“But then it gets dark very, very quickly here. Couldn’t really see much on the last three shots. Pretty much couldn’t see the ball land and the last putt was a little bit of a feel and a little bit of the read that [caddy] George gave me, and I’m very fortunate to be able to make it.

“I have a chance of winning the OMEGA Dubai Desert Classic, which is a great tournament. I’m going to give it my all tomorrow.”

Tyrrell Hatton, the 25-year-old Englishman who finished runner-up at November’s DP World Tour Championship and led through 54 holes in Abu Dhabi a fortnight ago, gave himself an outside shot in Dubai with a blistering 65 in the third round. It included a six foot putt for eagle on the par 4 17th which triggered a scintillating five hole stretch he played in six under.

The shot of the day belonged to Gregory Bourdy who aced the 11th; sadly it was not on one of the holes where they are giving away a Mercedes Benz or a timepiece from title sponsor OMEGA. Bourdy won’t even be able to sleep well on the perfect shot, his group the only one not to complete 54 holes before the lights really went out. The Frenchman will be back early to play his two final holes.

From the parochial viewpoint, the big story was Rayhan Thomas making the cut. The 17-year-old Dubai-based Indian amateur has rattled off 15 birdies, seven bogeys, three doubles and a triple bogey in 54-holes he’ll remember for life.