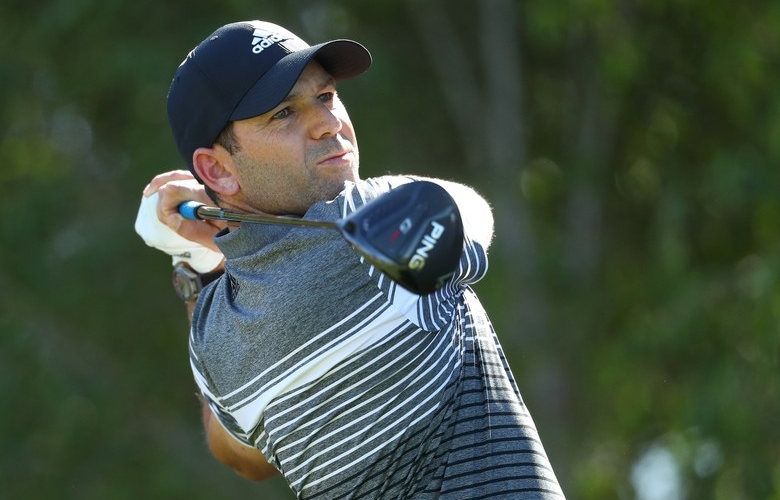 Garcia tees off on the 5th hole during Day 2 of the Abu Dhabi HSBC Championship at Abu Dhabi Golf Club on January 17, 2020.(Photo by Warren Little/Getty Images)

By John Huggan
ABU DHABI — As ever when the matter at hand happens to be the professional life and times of the ever-volatile Sergio Garcia, there is a lot going on. First though, the good news. Eight days after his 40th birthday—“I’m closer to 60 than I am to 20” he joked—and in an event where he has never finished outside the top 20 in six previous appearances, the Spaniard is on eight-under 136 halfway through the Abu Dhabi HSBC Championship.

Tied with Haotong Li and Renato Paratore, Garcia is two shots behind the 36-hole leader, Italy’s Francesco Laporta, who topped the Challenge Tour rankings last year. Rafa Cabrera-Bello and Matt Fitzpatrick are nine under, with Lee Westwood, Louis Oosthuizen and Patrick Cantlay among those two shots further back. World No. 1 Brooks Koepka is three-under 141 after following up an encouraging first round back from injury on Thursday with a disappointing 75 on Friday

Garcia’s second-round 69, four birdies, one bogey, was shot with 14 new clubs in his bag. Free to choose the make-up of his set following his split from Callaway, the former Masters champion is currently a free agent able to employ a mixture of manufacturers.

“Unfortunately I wasn’t comfortable enough with the Callaway ball, and they needed me to play it,” he explained. “So we decided to part ways. Nicely, though. There were no bad feelings from either side, which was great. I’m playing whatever feels best for me or fits me best. That’s where we are, and that’s what I was working on over the Christmas break.”

It wasn’t the easiest of decisions though. Suddenly able to pick from an array of goodies rather than use what he is being paid to play, Garcia took some time to find exactly what he wanted.

“Feel is important, but for me a club has to look good,” he said. “If it doesn’t look good, I’m not going to be able to play it, even if it’s the best club in the world. Then, when I try it and when I test it, I have to see good numbers. It’s as simple as that.”

Specifically and at least for the moment, Garcia’s fairway woods are TaylorMades. The others, including driver and putter, are all made by Ping. The ball in play is a Titleist.

“I’m sure I will try a couple of different things along the way,” Garcia said. “But I’m pretty happy with what I have at the moment. I doubt I will change the irons. They feel really good, as do the fairway woods. Just about the only thing I might look at is the driver, just to see if I can find a few more yards. I’m comfortable with it right now though.”

Another pleasing aspect of what is Garcia’s seventh visit to this event was the pace of play. Along with just about everyone else in the 132-strong field, he noticed a positive difference.

“People seem to be a bit more aware,” he said. “We were actually on the clock just after the turn, but we caught up quickly. Overall though, it did feel a bit quicker.”

That brief chat with a rules official is hardly Garcia’s first brush with the laws of the game, of course. In two weeks, he will return to the Saudi International, where last year he indulged in a famously extended tantrum. First there was a wild, club-swinging episode in a greenside bunker. Then, more seriously, a number of putting surfaces were damaged.

As a result, Garcia was disqualified from the event, a punishment many of his fellow players on the European Tour felt was inadequate. Because his behavior had a directly negative impact on the other competitors, the prevailing mood favored a longer suspension rather than a one-event DQ.

So it is that Garcia will soon be making a controversial return to the European Tour’s most controversial event, in a land hardly renowned for its adherence to basic human rights. Not surprisingly, Garcia has been making strenuous efforts to make belated amends.

“I feel terrible about what happened last year,” Garcia said earlier this week. “Obviously there were some outside things that got me to that point. But I want to go back. I want to show my respect to them.

“The easy thing would have been for me to hide and never go back there,” he continued. “But I love the people there, and I love the guys, all the people we met and the Sheikh and everyone that takes care of us during the tournament. They are amazing people, and they wanted me to go back. So that was an easy decision, and I’m excited to go back there. I want to show myself, show the true Sergio, and show them my respect and try to play the best that I can. And hopefully have a great tournament.”

Which he is halfway to doing this week on the other side of the Persian Gulf. What the weekend holds is anyone’s guess. But one thing is for sure. Life with Sergio is never dull.